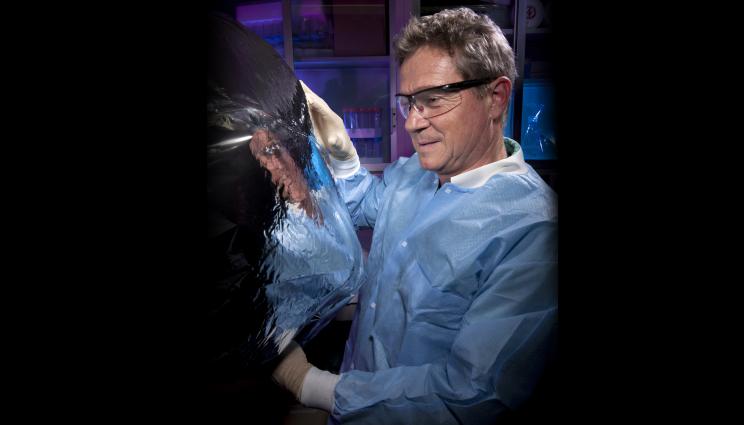 Lawrence Livermore National Laboratory (LLNL) scientists are leveraging their extensive experience studying the movement of airborne hazards to better understand the movement of virus-like particles through the air and to identify effective countermeasures.

While the burden of airborne diseases is known to be large, its true scope is underappreciated. LLNL researchers recently published a review in the journal Applied and Environmental Microbiology that highlights well-established cases of airborne viruses, bacteria and fungal pathogens causing disease in plants, animals and humans over distance scales ranging from a few meters to continental.

According to LLNL atmospheric scientist Michael Dillon, who leads the team’s work: “By understanding the airborne disease transmission, we hope to offer science-based information that people can use to protect themselves and others.”

The LLNL team is looking to study the physics of particle dispersion, analyzing how particles move around inside buildings and travel distances that may exceed six feet. They also are investigating key factors that may affect the movement of particles in a broad range of settings, including schools, offices, stores, restaurants and homes.

Based on LLNL’s past airborne threat agent research — including studies of radiological and chemical hazards, wildfire smoke and biological threats — researchers anticipate that appropriate use of air filtration systems can reduce indoor exposure to COVID particles. “We are modeling how commercially available technology — such as heating and cooling systems, exhaust fans and portable air cleaners — can impact exposure patterns and help reduce disease spread,” Dillon said.

Another key aspect of their research involves validating transmission models and protective measures through experimental work, by leveraging technology developed at LLNL that can be used to understand aerosol transport of biological threats. Known as DNA-tagged reagents for aerosol experiments, or DNATrax, this diagnostic tool consists of sugar particles that are tagged with a non-biological DNA bar code for unique detection. The DNATrax particles can be used as a harmless surrogate, mimicking the movement of pathogens in the air.

Led by chemical engineer Elizabeth Wheeler and physicist Matthias Frank, LLNL’s team is collaborating with other Department of Energy (DOE) national labs to design and deploy experiments using DNATrax particles to further assess airborne movement of the sugar particles. LLNL scientists will use the Lab’s existing protocols to develop and produce the uniquely tagged sugar particles, and scientists from four national laboratories will measure the movement of the DNATrax in lab-based testing chambers, as well as in real-world environments such as classrooms and offices.

Unlike many other tracers, DNATrax allows scientists to study the movement of low concentrations of these sugar particles, which could shed light on the extent of spread of infectious disease. This advantage enables the team to study the re-suspension of DNATrax particles from surfaces, as a way to model indoor disease transmission. These types of experiments can be used to determine if the movement of individuals can stir up particles initially deposited within a room or if the particles can travel between rooms on people’s clothing.

This multi-lab research regarding COVID airborne transmission is part of a broader effort coordinated by DOE's National Virtual Biotechnology Laboratory, a consortium of DOE national laboratories focused on response to COVID-19, with funding provided by the Coronavirus CARES Act.

Scientists from LLNL’s Biosciences and Biotechnology Division and the Laboratory’s Atmospheric, Earth and Energy Division are involved in this collaborative effort to expand the Lab’s toolkit of countermeasures. According to Acting Atmospheric, Earth and Energy Division Leader Rick Ryerson: “While the experimentally validated models developed through the team’s research can be immediately applied to the current pandemic, they also will serve as a resource for future disease outbreaks, multiplying their impact.”