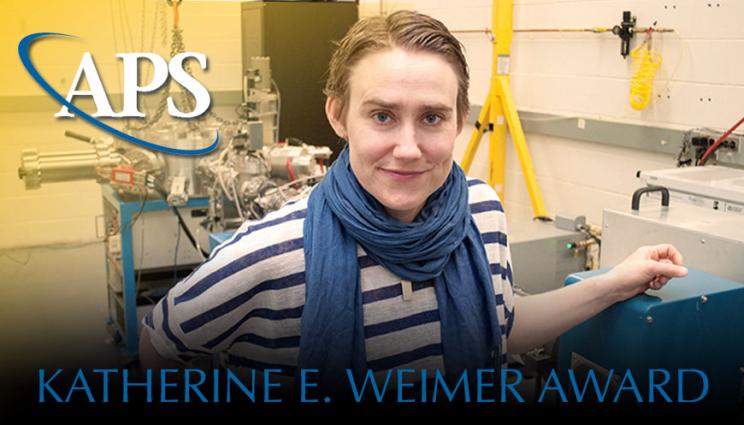 Maria Gatu Johnson has been recognized for her "outstanding plasma science research." Photo by Paul Rivenberg/MIT

Nuclear physicist Maria Gatu Johnson, who plays a key role in inertial confinement fusion (ICF) and Discovery Science campaigns at the National Ignition Facility (NIF), was named winner of the Katherine E. Weimer Award recognizing outstanding plasma science research by a woman physicist in the early stages of her career.

"I am honored and grateful that my efforts to do the best work I can are recognized in this way," said Gatu Johnson, a research scientist with the Plasma Science and Fusion Center at the Massachusetts Institute of Technology (MIT).

"Maria has been deeply involved in advancement of neutron spectroscopy and analysis on NIF, which has impacted nearly every integrated ICF experiment done at NIF," Casey said.

NIF, the largest and most energetic laser ever built, can reproduce extreme conditions found in nuclear reactions in support of the nation’s stockpile stewardship (SSP) goals. About 8 percent of NIF’s overall shot time is set aside for Discovery Science (DS) — basic science experiments that probe the inner workings of stars, planets and materials under those extreme conditions.

Casey noted that Gatu Johnson is the principal investigator for an ongoing DS campaign examining the process of stellar nucleosynthesis, or element formation, forged in the interior of stars.

Gatu Johnson was part of the research team for "Thermonuclear Reactions Probed at Stellar-core Conditions With Laser-based Inertia Confinement Fusion," which was published on Aug. 7, 2017, in Nature Physics. The team received a Science and Technology Excellence in Publication Award from the Lab’s Director’s Office in 2018.

The work includes measuring fusions reactions of helium-3, a light helium isotope. Casey said measuring the 3He+3He fusion reaction "is interesting just in terms of its nuclear physics, but also for better understanding the interior of our sun, where it is an important energy producing reaction in the proton-proton chain that converts hydrogen into helium."

The American Physical Society (APS) Division of Plasma Physics (DPP) started the award in 2001 to help boost the historically low representation of women in plasma physics. The award was named in honor of the late Katherine E. Weimer, a pioneering research physicist with Princeton University’s Plasma Physics Laboratory. The APS Plasma Physics Committee established the award to "recognize and encourage outstanding achievement in plasma science research by a woman physicist in the early years of her career."

Gatu Johnson said the award also honors the work of all of her research colleagues at NIF, MIT and the Omega laser facility at the University of Rochester’s Laboratory for Laser Energetics.

"This is really recognition not only for me but for everyone who has been working with me on all of my projects, including Discovery Science experiments to probe the solar 3He+3He  reaction, efforts to understand flows and asymmetries in ICF implosions and using and improving the MRS (Magnetic Recoil Neutron Spectrometer) for diagnosing layered implosions at OMEGA and NIF," she said.

She also had another reason to be happy with the award.

"On a personal note, it is also exciting to be able to come home and share this news with my two daughters, who are both considering careers as scientists," Gatu Johnson said.

The Weimer Award was only presented every three years, although starting this year, it will be awarded every two years. The award previously went to LLNL’s Félicie Albert in 2017 and Yuan Ping in 2011. Other previous recipients were Yu Lin of Auburn University in 2002, Elena Belova of Princeton’s Plasma Physics Laboratory in 2005 and Lin Yin of Los Alamos National Laboratory in 2008.

Gatu Johnson will receive the award at the annual DPP meeting in October in Fort Lauderdale, Florida.