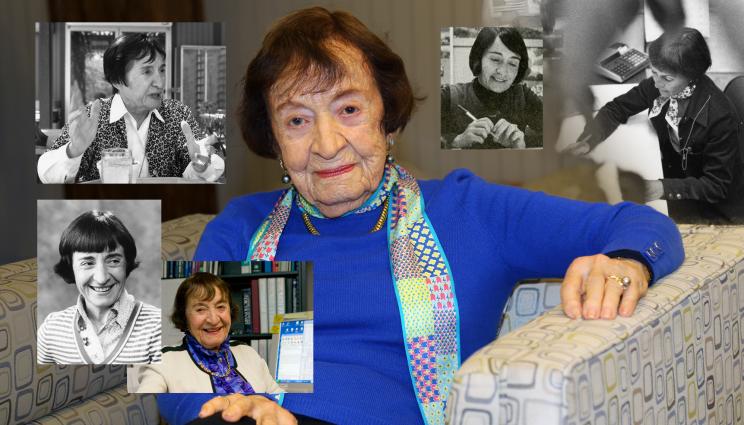 Luisa Hansen is not one to sit still or be idle. Having worked at Lawrence Livermore National Laboratory (LLNL) for the past 60 years (joining just seven years after the Lab opened), she can still be seen going from one meeting to another and attending Lab events. Hansen, a nuclear physicist, enjoys her job and has no immediate plans to retire.

“If you enjoy what you are doing, work hard to succeed," she said. "Be honest and open to hear new opinions. If you think that something is not right, don’t be afraid to speak up.”

Hansen has lived this motto throughout her years at the Laboratory, starting at LLNL at a time when the workforce was comprised primarily of white males. All secretaries were white females and 99 percent of the scientists and engineers were white males. So, for Hansen, a petite and confident Chilean woman with a strong accent, she was a self-described “rare bird.”

The year 1959 was a pivotal one for Hansen. She earned her Ph.D. in experimental nuclear physics at the University of California, Berkeley in June, gave birth to her son in July and joined the Lab in December. As one of the only women Ph.D.s in the early days of the Lab, “my only validation was to have just earned a P.h.D in nuclear physics from UC Berkeley, one of the best universities in the USA, at a time when affirmative action did not yet exist.” Her biggest challenge was to show male colleagues that she was a good and competent physicist. She often had to ask for opportunities.

"It is very important to make yourself visible, but in a professional way. You mustn’t be afraid to speak up and ask questions," she said.

Hansen was featured in a Newsline article in May 1971, entitled "Meet the Lab's Lady Ph.D.s." In the article she was listed as one of eight women out of a total of 483 Ph.D.s working at the Laboratory. She's quoted as saying, "No woman has to defend her right to a place in her field, except by her work."

Hansen didn't have a mentor in the early days, simply because women professionals were few. She said that today finding a good mentor is very important. "Find someone who is knowledgeable in their field, who knows their way around the Lab and who will act as your champion."

Hansen has been a longtime activist for increasing the participation of women in science at the Lab. She has been a member of the Lawrence Livermore Laboratory Women’s Association (LLLWA) since its inception and served as the president of LLLWA in 1992. During that time, she and others in LLLWA worked to unveil the large discrepancies in the salaries of professional men and women at the Lab. They presented tabulated data of the salaries of men and women by field and degree to the director of the Lab, as well as to many group leaders. What they found were systematic differences between 15–30 percent that were shown in all the groups. The Lab moved to correct these differences.

“The highlights of my career occurred each time that I have authored a paper and it has been published in a scientific journal (Physical Review, Nuclear Physics, Nuclear Science and Engineer), or when I have been invited to attend international meetings in my field,” said Hansen. “I have published 184 papers in my 60 years at the Lab and I have given papers in France, Germany, Russia, Japan and China.”

In 1989 Hansen was chosen as a fellow of the American Nuclear Society for her work in the Pulse Sphere Program, which was of interest to the Weapons Program at the Lab.

Hansen continues carving the path for women in science and serves as a role model. She continues to be involved in activities that encourage women to pursue careers in science, technology, engineering and math. For a woman just starting out, Hansen offers the following advice: “Be visible by attending seminars and discussions in your division or work group. Don’t be afraid to ask questions if things are not clear by the presenter, which it is the case many times. Always be assertive, but never aggressive.”

Why does Hansen continue working beyond the typical retirement age? She says it’s because of “the enjoyment of my field, where I am always working on new projects that avoid the atrophy of my brain.” She also credits good health that allows her to come to the Lab every day. She looks forward to many more years at the Lab.

Hansen, who has been married to her husband William since 1954, added, “It’s important to choose a good partner who knows you and is supportive of your career. My husband and I have always worked together to achieve balance. We are now both old in age but not in energy.”

Outside of work, Hansen has many interests. “Together with my husband, we enjoy traveling abroad; music (we attend the San Francisco Symphony and the California Symphony); theater (specifically the Repertory Theater and the Aurora Theater in Berkeley); and reading (we belong to a book club and meet regularly to keep up with the present literature). In addition, I keep my Chilean roots alive participating in Chilean activities in San Francisco.”