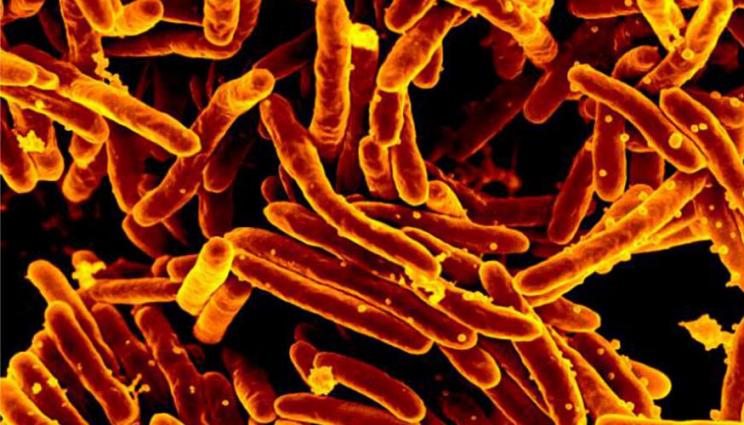 Scanning electron micrograph of Mycobacterium tuberculosis, the bacteria that cause tuberculosis

An international team of researchers including those from Lawrence Livermore National Laboratory (LLNL) has found a new way to investigate how tuberculosis bacteria inactivates an important family of antibiotics: They watched the process in action for the first time using an X-ray free-electron laser.

Tuberculosis (TB), a lung disease that spreads in the air through coughs or sneezes, kills more people worldwide than any other infectious agent, according to the World Health Organization’s latest global report. In hundreds of thousands of cases each year, treatment fails because the bacteria that cause TB have become resistant to antibiotics.

The researchers observed how an enzyme from drug-resistant TB bacteria damages an antibiotic molecule. The new technique provides a powerful tool to examine changes in biological molecules as they happen.

The results appeared in the journal BMC Biology.

LLNL’s Matthias Frank, who helped perform the experiments, said the technique is promising for other biological systems.

"This is the first time that we could study enzymology by looking at the individual enzyme and substrate molecules," he said.

In the experiments at SLAC National Accelerator Laboratory, the team mixed an antibiotic with an enzyme called beta-lactamase that antibiotic-resistant TB bacteria use, and then watched in real time as the enzyme attacked the antibiotic to deactivate it.

The researchers’ method, called mix-and-inject serial crystallography, takes advantage of the ultrafast pulses produced by SLAC’s Linac Coherent Light Source (LCLS). X-ray snapshots taken 30 milliseconds to 2 seconds after the reaction began showed beta-lactamase binding to the antibiotic, ceftriaxone, and bursting one of its chemical bonds, which effectively inactivates the antibiotic.

In this study, the research team delivered tiny crystals of beta-lactamase while mixing them with the antibiotic just fractions of a second before they were hit with X-ray pulses. The team took millions of X-ray snapshots during the reaction and stitched them together to create a map that shows changes in the 3D structure of the antibiotic as it interacts with the enzyme at room temperature.

In future experiments, taking even more snapshots during the reaction could provide greater detail of the structure and chemical behavior of beta-lactamase. With more information scientists could manipulate the design of antibiotics to prevent such attacks. The experimental method also could be applied to learn the fine details of other types of biological processes where enzymes initiate or steer reactions.

The work was funded by the DOE Office of Science, Biodesign Center for Applied Structural Discovery at Arizona State University, Helmholtz Association, National Institutes of Health and the National Science Foundation.