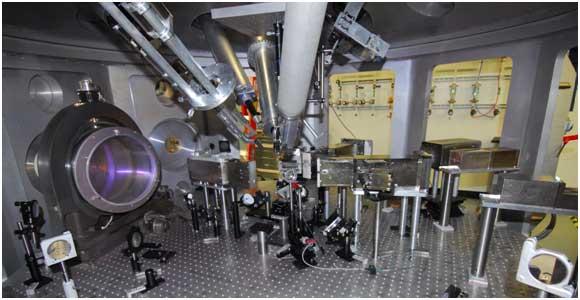 The inner workings of the Titan laser in the Jupiter Laser Facility.

Nearly 20 years ago, a group of researchers at the Laboratory proposed a hole boring process that would serve as the original scheme for fast ignition. Today, LLNL researchers are pushing this research ahead into new regimes.

When a laser beam is reflected from a mirror, a finite amount of momentum - carried by light - is transferred to the mirror so that the mirror is slightly pushed. At high laser intensities into the relativistic regime, the light pressure is on the order of tens of Gbar (1Gbar = a billion atmospheres), which is intense enough to push a high-density plasma and create a channel along the light path. The channel helps to guide the laser beam and deliver energetic electrons to ignite the core of fuel.

In a recent experiment led by the Lab's Yuan Ping using the Titan laser at the Jupiter Laser Facility, researchers performed the first time-resolved measurements on the hole boring process in the relativistic regime with a novel diagnostic called Specular FROG (frequency-resolved optical gating). The data show an unexpected slowing down of hole boring even when the laser intensity is still increasing over time.

The simulation and modeling effort is led by LLNL physicist Andreas Kemp. The previous models on hole boring only take into account the ion momentum, while the electron momentum has been ignored as they have much less mass. In the relativistic regime, however, electrons become so energetic that their momentum is no longer negligible. These electrons quickly leave the laser-plasma interaction region. A return current flows to compensate the charge but not the loss of momentum. As a result, the hole boring becomes slower than previous predictions.

This work highlights the collaboration between experimentalists and modelers. The data provide a hint and guidance for model development, and the model supports data interpretation and helps the understanding the underlying physics.

According to Ping, the results provide a new understanding of relativistic laser-plasma interaction, especially how the energy and momentum are partitioned among different groups of particles. The time-resolved data are critical for validation of the simulation tool that is used for point design of fast ignition.

"These results will impact not only fast ignition for fusion, but also many applications involving relativistic laser-plasma interaction, such as particle acceleration, antimatter generation and high harmonics generation," Ping said.

The team has been awarded OMEGA EP laser time to do the FROG measurements for much longer laser pulses at similar intensities, which is more relevant to full-scale fast ignition. "At longer time scales, the plasma thermal pressure could compete with the light pressure and modify the dynamics," she noted.

The paper appears in the Oct. 5 edition of the journal, Physical Review Letters .