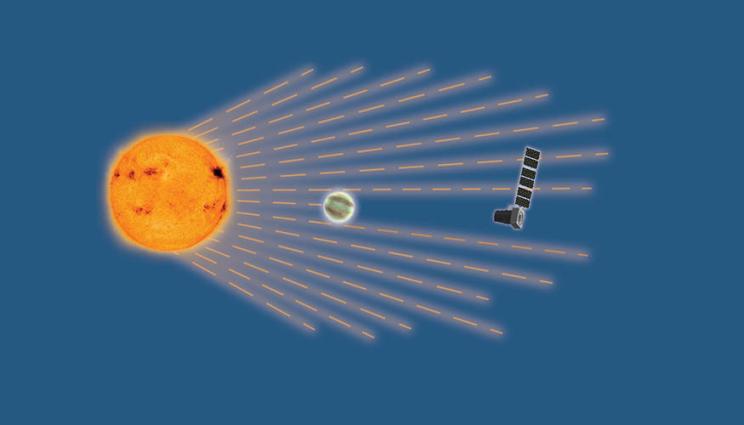 An illustration of Pandora studying an exoplanet’s atmosphere as it passes in front of its host star using transit spectroscopy. LLNL will begin building the small satellite that was recently approved to continue toward flight after a concept study. Graphic by LLNL and NASA’s Goddard Space Flight Center.

The Pandora mission, co-led by a national laboratory and a NASA flight center, has passed a crucial step on its path to study stars and planets outside our solar system, or exoplanets.

The mission will study approximately 20 stars and exoplanets by analyzing starlight that passes through exoplanets’ atmospheres, using a technique called transit spectroscopy.

Pandora will disentangle signals to understand which are from exoplanet atmospheres and which are from starspots, stellar phenomena that are similar to sunspots and can contaminate data. The celestial untangling will address and mitigate the impact of stellar inhomogeneities on exoplanet data obtained with NASA’s James Webb Space Telescope (JWST), which was launched on Christmas Day.

Over the next 21 months, Pandora will mature its mission concept and demonstrate that its half-meter telescope is ready for flight. The mission is leveraging LLNL’s experience and capabilities in optics design, fabrication and small satellites.

“This is a huge step because, while it’s a small satellite, Pandora will deliver impactful science for NASA’s astrophysics program,” said Ben Bahney, LLNL’s program leader for Space Science and Security. “And we’re doing it efficiently, under unprecedented budget constraints for mission-quality science.”

Pandora is part of NASA’s Astrophysics Pioneers program, which focuses on small, low-cost, yet ambitious missions to unlock new secrets from the cosmos. The mission will be developed under a $20 million cost cap. Integrating LLNL Space Science and Security Program’s aluminum telescope design with commercial products will help lower costs.

Pandora is led by Elisa Quintana, principal investigator at GSFC, and Supsinskas at LLNL. Co-investigators from NASA Ames and several universities will provide scientific contributions to the project. It is expected to launch in late 2024 or early 2025.