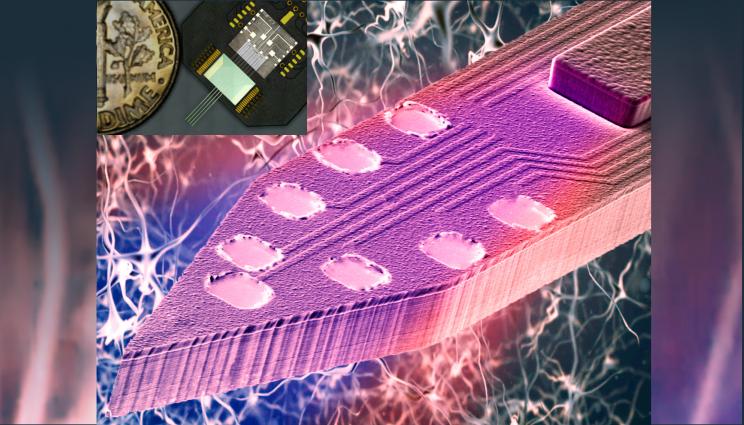 Researchers developed a silicon-based neural implant that can control the electrical activity of brain cells by shining multicolor light into the brains of awake mice. The results were published in Nature Microsystems & Nanoengineering and appeared on the journal’s June cover.

Optogenetics – controlling neurons with light – may lead to cures for PTSD, Alzheimer's

Through the emerging field of optogenetics, a technology that allows genetically modified neurons in living tissue to be precisely controlled by means of light, scientists are attempting to gain a better understanding of how the brain works in hopes of discovering cures for debilitating neural disorders such as post-traumatic stress disorder (PTSD) and Alzheimer’s disease.

A Lawrence Livermore National Laboratory (LLNL) engineer, along with researchers at the University of Michigan and New York University (NYU), have taken a major step forward in enabling "multicolor" optogenetic control of different neuron types. The team, including LLNL’s Komal Kampasi, developed a novel silicon-based neural implant that can control the electrical activity of brain cells by shining multicolor light into the brains of awake mice. The results were published in Nature Microsystems & Nanoengineering and appeared on the journal’s June cover.

The paper’s lead author, Kampasi performed her work as a University of Michigan doctoral candidate. She said the technology opens new avenues for neural circuit interrogation, which will help scientists better understand the organization and function of complex neural circuits.

"While most research in the field of optogenetics has focused on manipulating one neuron-type at a time by delivering mono-color light, our technology offers a multicolor, fiber-less solution for controlling two or more spatially intermingled neuronal populations," Kampasi explained. "This is a major step forward in optogenetics because neuroscientists can now manipulate different neuron types at a local circuit level while simultaneously recording high-quality, low-noise electrical data from those cells."

Kampasi, who called the device an "engineering milestone," added that her teams’ design eliminates the use of bulky, invasive optical fibers by integrating onboard micro lasers and waveguides to deliver multicolor light, making the platform much more compact, scalable and less invasive while still maintaining the optical, thermal and electrical device characteristics required for a neural implant.

The National Institutes of Health (NIH) funded the three-year study as part of the White House BRAIN initiative — a public-private collaborative effort to revolutionize understanding of the human brain. It focused on developing advanced neurotechnologies to study denser and deeper brain regions such as the hippocampus, the part of the brain responsible for creating and retaining memories. Kampasi’s team, headed by University of Michigan professor Euisik Yoon, developed the multicolor neural optoelectrode, which was implanted into the brains of mice by Gyorgy Buzsaki’s team of neuroscientists at NYU. Buzsaki’s team wanted to understand how memories get formed and erased by studying the interaction between different cell types in the hippocampus.

"We wanted to know if we could precisely control the spiking activity of densely intermingled neuron types in mice hippocampus; we were ecstatic to see that we can," Kampasi said. "Such capability of manipulating multiple cell types, simultaneously and independently, at a specific circuit location is critical in understanding the interplay between different neuron types and constitutes an important avenue in the future of neuroscience research."

One of Kampasi’s current aims is to apply the technology to LLNL’s unique flexible, thin-film neural probes. LLNL’s electrode arrays have been used in several studies recently to record and stimulate brain activity and have demonstrated long-lasting lifetimes. Integration of on-board flexible optics on LLNL’s devices will significantly improve the capabilities of existing neural probe arrays and enable new studies previously not possible, researchers said.

"By marrying this state-of-the-art optical stimulation capability with Livermore’s flexible neural probe technology, which is showing exceptional stability and lifetimes, we are working to develop a first-of-its-kind, flexible polymer-based optoelectrode arrays," said Shankar Sundaram, director of LLNL’s Bioengineering Center. "This, in concert with the high-density electrophysiological recordings, promises to shed new light on the workings of the brain."