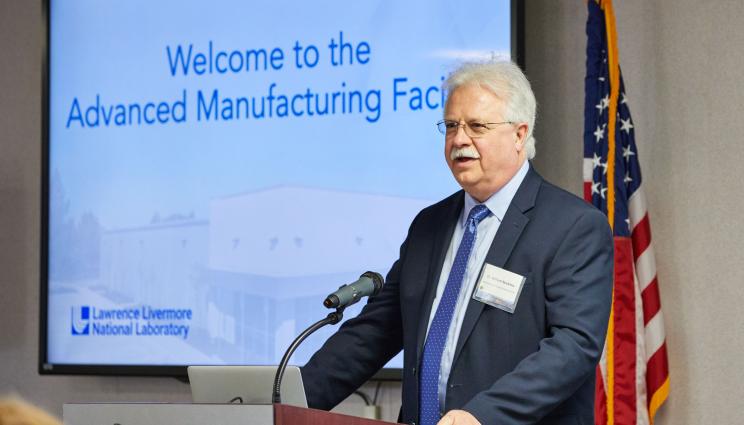 The $10 million, 14,000-square-foot facility, located in the recently expanded Livermore Valley Open Campus, opened to industry and academia in early 2019 and currently boasts eight partners working under one roof. The event, held on Jan. 23, was the first time that members of the public and media got to see inside the facility, aimed at accelerating the transfer of Lab-developed technology to the marketplace, while helping industry improve efficiency in their manufacturing processes. NNSA and LLNL leadership also hope the collaborations will “spin in” technological advancements that will positively impact the Lab’s national security mission space.

Dozens of Lab employees and dignitaries attended the dedication, including NNSA’s Principal Deputy Administrator Bill Bookless, who worked as a physicist at LLNL for more than 30 years. Bookless said the AML demonstrates the added role that NNSA laboratories can play in delivering on their national security missions, while at the same time adding value to the American economy.

“This facility represents another step in giving the taxpayers of the nation their money’s worth,” Bookless said. “When I started at the Laboratory, we didn’t have anything like this, where we had an open area of the Laboratory where we could work shoulder-to-shoulder with our industrial and academic partners…It’s wonderful to see the evolution of that capability come home to our sites, where we can be the gathering point for a broad range of intellectual dialogue to advance these techniques and tools.”

Designed as a fully collaborative environment with easy access for industry and academia, the AML resides in the Lab’s open area and does not require the standard Lab badging process to access. The facility includes a 5,000-square-foot wet lab with various cutting-edge 3D-printing machines, an equally large dry lab containing laser-driven metal 3D-printing equipment, a conference room and a viewing corridor for the public to observe ongoing work.

Laboratory Director Bill Goldstein said the facility, which was built with internal funding and NNSA support, serves as a tribute to LLNL’s commitment to push the boundaries in advancing technology while engaging the community and the broader private sector.

“At the AML, we will work side-by-side with innovators from industry and academia to transfer cutting-edge capability to our programs, as well as to spin out some of the unique discoveries in materials and manufacturing that we make here to our partners,” Goldstein said. “Its siting in our open campus is enabling for these purposes and represents a further step in the vision that we have for open innovation at the Laboratory.”

Congressman Eric Swalwell (D-Dublin) attended and spoke at the dedication, calling the Lab and the AML facility a “gem” of his district, adding that the event was a day to “celebrate the best of our community.”

“I regard every person who works at our national labs as a patriot, but I don’t believe every patriot has to work in public service,” Swalwell said. “I believe that many people who work in the private sector who work alongside or in partnership with our national labs or the federal government are also patriots, working to serve the cause of our national defense, as well as the cause of advancing science. I look forward to seeing some great partnerships developed here.”

The impact of the AML on the Lab’s industry partners was apparent throughout the event, as representatives from several companies spoke to the advantages of having access to the Lab’s expertise, equipment, novel materials and unique manufacturing processes, many of which are not yet commercially available.

One of the many early Lab partnerships birthed out of the AML is with General Electric, which has installed a large metal additive machine in the facility as part of an agreement with LLNL to accelerate metal 3D-printing processes for part production in aerospace and other applications. The company’s Technology Director of Additive Research, Brent Brunell, said the GE additive team is already benefiting from the partnership.

“The [Lab’s] laser group is one of the leading metal additive groups in the country, so for us to be able to work with them, see their ideas and help to pull that into commercialization is a big deal,” Brunell said. “The other side is to be able to push our ideas and capabilities back into the Lab and help out the manufacturing side as part of the NNSA.”

Jamil Abo-Shaeer, the CEO of Vector Atomic, a Pleasanton-based company partnering with the Lab on quantum sensor approaches to ultra-precise global positioning, said the company has been an “early beneficiary” of the AML, allowing the startup to win a large outside contract and thrive in ways they otherwise couldn’t have done.

“We didn’t really take off until we partnered with the AML,” Abo-Shaeer said. “That partnership has given us immediate access to world-class facilities, enabling equipment and world-class collaborators. You put all those pieces together and a small company like ours can do real things.”

Following the speakers, Gabriela Jimenez, the deputy district director for Assemblywoman Rebecca Bauer-Kahan, presented Goldstein with a certificate of recognition marking the dedication.

The event then moved to the AML, where media, VIPs and Lab employees toured the facility and learned about ongoing collaborative projects with private industry from Lab scientists and engineers. Among the highlights:

The Advanced Manufacturing Laboratory is looking for additional partners and is open to industry and academia.