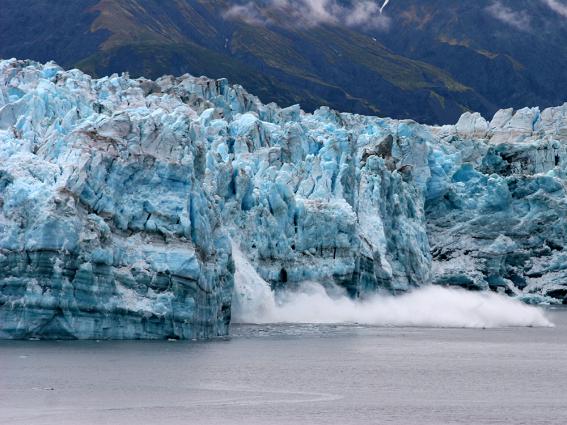 a. The components are thermal expansion in the upper 700 m (red), thermal expansion in the deep ocean (orange), the ice sheets of Antarctica and Greenland (cyan), glaciers and ice caps (dark blue) and terrestrial storage (green). b. The estimated sea levels are indicated by the black line (this study), the yellow dotted line and the red dotted line (from satellite altimeter observations). The sum of the contributions is shown by the blue line. Estimates of one standard deviation error for the sea level are indicated by the grey shading. For the sum of components, rigorous estimates of one standard deviation error for upper-ocean thermal expansion are included; these are shown by the thin blue lines. All time series were smoothed with a three-year running average and are relative to 1961.

LIVERMORE, Calif. – New research suggests that ocean temperature and associated sea level increases between 1961 and 2003 were 50 percent larger than estimated in the 2007 Intergovernmental Panel on Climate Change report.

The results are reported in the June 19 edition of the journal Nature . An international team of researchers, including Lawrence Livermore National Laboratory climate scientist Peter Gleckler, compared climate models with improved observations that show sea levels rose by 1.5 millimeters per year in the period from 1961-2003. That equates to an approximately 2½-inch increase in ocean levels in a 42-year span.

The ocean warming and thermal expansion rates are more than 50 percent larger than previous estimates for the upper 300 meters of oceans.

"This is important for the climate modeling community because it demonstrates that the climate models used for assessing sea-level rise and ocean warming tie in closely with the observed results," Gleckler said.

Climate model data were analyzed from 13 different modeling groups. All model data were obtained from the WCRP CMIP3 multi-model dataset archived at the LLNL’s Program for Climate Model Diagnosis and Intercomparison (PCMDI).

Although observations and models confirm that recent warming is greatest in the upper ocean, there are widespread observations of warming deeper than 700 meters.

Results were compared with recent estimates of other contributions to sea-level rise including glaciers, ice caps, Greenland and Antarctic ice sheets, and thermal expansion changes in the deep ocean. When these independent lines of evidence are examined collectively, the story is more consistent than found in earlier studies.

The oceans store more than 90 percent of the heat in the Earth’s climate system and act as a temporary buffer against the effects of climate change. The ocean warming and thermal expansion rates are 50 percent larger than previous estimates for the upper 700 meters of oceans, and greater than that for the upper 300 meters.

"This is just the tip of the iceberg, so to speak," Gleckler said. "Our ability to quantify structural uncertainties in observationally based estimates is critically important. This study represents important progress."

The team involved researchers from the Centre for Australian Weather and Climate Research (CSIRO), the Antarctic Climate and Ecosystems Cooperative Research Centre and LLNL.