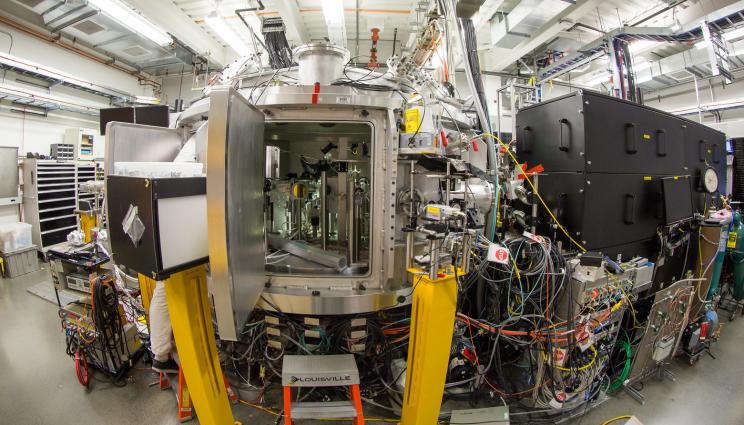 LLNL scientists used the Matter in Extreme Conditions beamline at the Linac Coherent Light Source at SLAC National Accelerator Laboratory for their research on melting and refreezing metal. Image courtesy of SLAC.

Observations of melting metal at the picosecond scale

For the first time, Lawrence Livermore National Laboratory (LLNL) scientists and collaborators have observed the shock melting and refreezing of a metal (zirconium) at the picosecond scale (trillionths of a second).

Melting and freezing are some of the most common processes but can be difficult to understand since the fundamental mechanisms occur on near-atomic and picosecond timescales.

“Detailed knowledge of these mechanisms and the ability to control them has the potential to revolutionize how we view melting and freezing and could have advantageous applications such as material synthesis of metallic glasses,” said LLNL physicist Harry Radousky, lead author of a paper appearing in Physical Review Research.

Metallic glass, or glassy metal, is a solid metallic material, usually an alloy, with disordered atomic-scale structure and is used in a variety of applications, from making golf clubs to aerospace construction. “The small scale of the experiment allowed us to achieve extremely high cooling rates,” said experimentalist and LLNL co-author Mike Armstrong.

The team, made up of scientists from LLNL, SLAC National Accelerator Laboratory, Los Alamos National Laboratory, Carnegie Institution of Washington, Argonne National Laboratory and the University of Cologne, used ultrafast X-ray diffraction at the Matter in Extreme Conditions (MEC) beamline of the Linac Coherent Light Source (LCLS) at SLAC to observe shock melting driven by rapid (120 picosecond) laser pulses on a thin bilayer of aluminum/zirconium.

At pressures of 100 GPa (1 million atmospheres) in the aluminum (1.3 million atmospheres in zirconium), there was a rapid melting of both metals. A few hundred picoseconds after release of the pressure, the zirconium began to refreeze and crystallize.

Zirconium is well suited for studying material transformations due to its complex phase diagram, allowing the study of three solid-solid phase transformations plus the melt transition at pressures attainable at the MEC/LCLS.

To help determine the timing of compression and release waves in the sample and the distribution of pressure, shock waves were simulated in the aluminum/zirconium layers using an LLNL hydrocode. "The shock simulations helped glean information on the timing and pressure of the melting transition observed in the X-ray diffraction data," said LLNL co-author Ryan Austin.

Jon Belof, the Laboratory Directed Research and Development (LDRD) project leader, said: "This combination of dynamic X-ray diffraction and detailed theoretic analysis has taught us a great deal about solidification under these conditions, especially the role of heat transport and how it impacts interface kinetics.”

The team also concluded that because they observed crystallization rather than a metallic glass, this indicated that the formation of single-phase metallic glasses, even with these extremely high cooling rates, may be fundamentally limited.

Other LLNL authors include Elissaios Stavrou, Alexander Chernov and Paulius Grivickas. The research was funded by LLNL’s LDRD program.