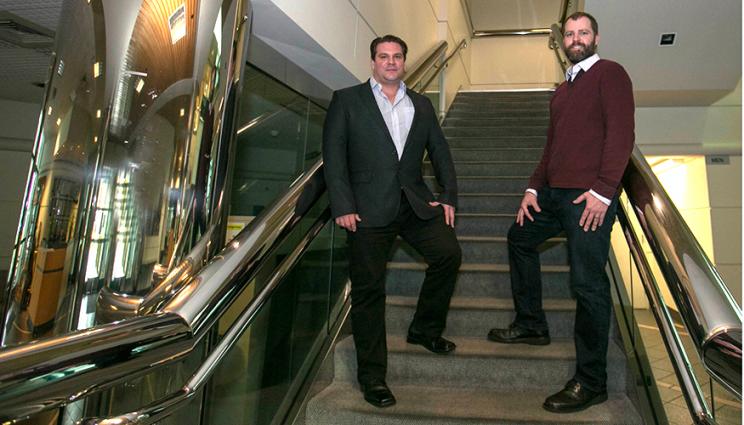 Jonathan Belof and Eric Duoss joined 100 others in winning the highest honor the U.S. government gives to scientists and engineers for innovative research and community service in the early stages of their independent careers.

Belof has performed research in stockpile stewardship at the Lab since 2010 and is a group leader in the Design Physics Division in the Weapons and Complex Integration Directorate. He won for his work in phase transition dynamics and non-equilibrium systems, as well as his efforts in teaching science, technology, engineering and math (STEM) and mentoring underprivileged students while at the University of South Florida, as well as LLNL’s High Energy Density Physics summer scholar program.

"It’s just overwhelming, in a good way," Belof said. "It’s a tremendous honor and I’m just really humbled by this award. Nothing at LLNL is an individual effort -- it’s the outcome of a team. This recognition is evidence of how great a place LLNL is to be for an early career scientist. I’ve been astounded by the diversity of people that I work with here at Livermore; it’s part of why the Lab has such a high impact. Interacting with people with such a wide range of backgrounds has opened up a whole new world of science for me. I hope to use this award to continue the pursuit of exciting, cutting-edge science and enable others at LLNL to do the same."

A member of the Lab’s technical staff, Duoss conducts research in advanced materials and manufacturing combined with micro-architected design and has worked at the Lab since 2010. In addition to his programmatic work, Duoss has dedicated himself to educating the younger generation of scientists and engineers about STEM pathways, volunteering countless hours and conducting Lab tours for students and teachers. Duoss said the early career award will encourage him to seek more creative avenues in his research and to continue mentoring youth.

"This is truly a recognition of the kind of environment we have that early career scientists and engineers can do creative and exciting things," he said. "It’s a testament to the extraordinary work I’ve been privileged to be a part of and the team members I’ve been fortunate to work with. Without them, I’m certain this award wouldn’t have been possible. It shows we’re on the right track. I’m at that point in my career where I’m having an opportunity to be a part of all these projects. I hope I can be an innovative engine to spur thought and get people to think of new ideas."

Belof and Duoss are among 13 presidential early career winners from the Department of Energy. The awards are coordinated by the Office of Science and Technology Policy within the Executive Office of the President.

"I congratulate these outstanding scientists and engineers on their impactful work," Obama said. "These innovators are working to help keep the United States on the cutting edge, showing that federal investments in science lead to advancements that expand our knowledge of the world around us and contribute to our economy."

Belof and Duoss will visit the White House and meet with President-elect Donald Trump at a future time.