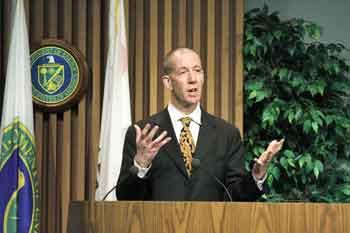 Contrary to popular belief, manufacturing must remain an integral part of the economy if the United States is to remain the "nation of thinkers and innovators" that has dominated the global marketplace, Ron Bloom, special assistant to the president on manufacturing, told a Lab audience Monday.

Bloom was the keynote speaker at a meeting of the Council on Competitiveness Technology Leadership and Strategy Initiative advisory committee on High Performance Computing (HPC), hosted by the Laboratory. The advisory committee -- made up of representatives from industry, academia and government -- met to discuss ways HPC can help U.S. manufacturers innovate and better compete in the global marketplace.

In a talk entitled "Winning the Future," Bloom said the partnership of government, academia and industry has a critical role to play in the revitalization of American manufacturing. He cited the restructuring of General Motors and Chrysler, pillars of the American car industry, as an example of how government can play a constructive role in revitalizing a moribund industry.

"We were able to preserve not just two companies, but two industries important to American manufacturing," Bloom said. "We were able to help them create a different approach to doing business. And most importantly we were able to pull back from those investments because it really is not the role of government to own private companies.

"But when you have extraordinary storms as we did in this country a few years ago, it is the role of government to intervene to prevent catastrophes," he said.

Innovation is what has historically driven manufacturing in the United States and the country could lose its innovative and competitive edge if manufacturing is allowed to decline and move offshore, as many people feel is inevitable, Bloom said.

"We decided we were a nation of thinkers and innovators and that we would invent things and them somebody else would make them," Bloom said.

In light of this "newfound awareness," the Obama administration, under Bloom's leadership, has been re-examining government policy related to manufacturing and ensuring that "we have pro-manufacturing policy in America."

"The key to productivity is innovation," Bloom said. "What's new today is a better and deeper appreciation of the intertwining of innovation and manufacturing.

"If we let the manufacturing go in this country, our ability to be the world leader is at risk," he added. "What many innovators have begun to talk about and understand recently is that there is a deeper connection between the ability to continue to innovate and the ability to manufacture.

"If you let the manufacturing leave, the gravitational pull will start to pull the innovation with it and we will find ourselves losing more of the intellectual power contained in those people innovating closer to the manufacturing process," Bloom said.

The job of government is to ensure that the linkage between innovation and manufacturing is clear in policy and goes in both directions, he said. The "unique role of government" turns on the question of "what is government doing to make this the most hospitable country in the world for manufacturing."

Bloom said government's role is to build and maintain the infrastructure needed to spark the innovative ideas that fuel manufacturing, including education and the financial system that provides investment.

Bloom said the commonly held "world weariness that our best days in manufacturing are behind us" is "nonsense."

All manner of numbers are cited as a measure of a nation's economic health, Bloom said. But what really matters is "the ratio of people who want to come here to those who want to leave. This (ratio) is two zeroes bigger than for any other nation."

Bloom said the United States is one of the few places where someone could come with the idea of building a star on Earth, as the National Ignition Facility proposes to do, and make it a reality. "There are not a lot of places on Earth where a group of people could assemble themselves and have that absurd idea and then go out over a dozen years and get it done," he said. "It is that character that infuses the work of so many of the people in America who are trying to invent the future."

"In partnership with government, private non-profits like the Council on Competitiveness, industry and the Laboratory, we can make that future happen."