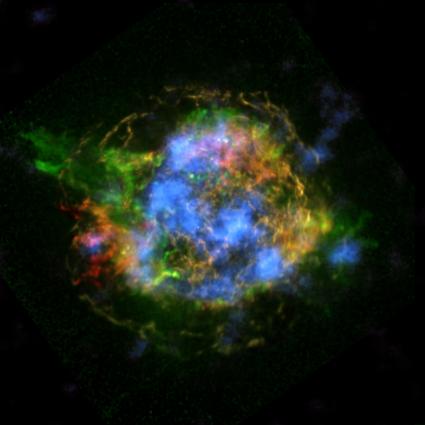 The NuSTAR high-energy X-ray observatory captured this image of Cassiopeia A, a remnant that blew up as a supernova more than 11,000 years ago, leaving a dense stellar corpse and its ejected remains. Because the supernova was so far from Earth, the light only reached Earth about 350 years ago, when it may have appeared to be a new, bright star in the sky.

Anne M Stark, stark8 [at] llnl.gov, 925-422-9799
For the first time, an international team of astrophysicists, including Lawrence Livermore National Laboratory scientists, have unraveled how stars blow up in supernova explosions.

A supernova is the cataclysmic death of a star, which is extremely luminous and causes a burst of radiation that often briefly outshines an entire galaxy before fading from view. The explosion expels much or all of a star's material at a velocity of 10 percent of the speed of light, driving a shock wave into the surrounding interstellar medium. This shock wave sweeps up an expanding shell of gas and dust called a supernova remnant.

"Stars are spherical balls of gas, and so you might think that when they end their lives and explode, that explosion would look like a uniform ball expanding out with great power," said Fiona Harrison, the principal investigator of NuSTAR at the California Institute of Technology and one of the lead authors of a new paper. "Our new results show how the explosion's heart, or engine, is distorted, possibly because the inner regions literally slosh around before detonating."

The research appears in the Feb. 20 issue of the journal Nature.

The Cas A remnant was created when a massive star blew up as a supernova more than 11,000 years ago, leaving a dense stellar corpse and its ejected remains. Because the supernova was so far from Earth, the light only reached Earth about 350 years ago, when it may have appeared to be a new, bright star in the sky.

Supernovae seed the universe with many elements, including gold, calcium and iron. While small stars like our sun die less violent deaths, stars with about eight times the mass of our sun or greater blow up in supernova explosions. The high temperatures and particles created in the blast cause fusion of lighter elements into heavier ones.

NuSTAR is the first telescope capable of producing maps of radioactive material in supernova remnants; in this case, titanium-44, an atom with an unstable nucleus produced at the heart of the exploding star.

"Cas A was a mystery for so long but now with the map of radioactive material, we're getting a more complete picture of the core of the explosion," said Bill Craig, an LLNL scientist now at UC Berkeley and co-author of the paper.

The NuSTAR map of Cas A, which shows the titanium concentrated in clumps at the remnant's center, points to a possible solution to the mystery of how the star met its demise. When researchers simulate supernova blasts with computers, the main shock wave stalls out and the star fails to shatter.

"For NuSTAR, Cas A is special," said Mike Pivovaroff, a LLNL physicist and a co-author on the new paper. "One of NuSTAR's science goals is to map recently synthesized material in young supernova remnants, and Cas A is one of the youngest supernova remnants we know of."

The latest findings strongly suggest the exploding star literally sloshed around, reenergizing the stalled shock wave and allowing the star to blast off its outer layers.

NuSTAR, a NASA Explorer-class mission launched in June of 2012, is uniquely designed to detect the highest-energy X-ray light in great detail. For Livermore, the predecessor to NuSTAR was a balloon-borne instrument known as HEFT (the High Energy Focusing Telescope) that was funded, in part, by a Laboratory Directed Research and Development investment beginning in 2001. NuSTAR takes HEFT's X-ray focusing abilities and sends them beyond Earth's atmosphere on a satellite. The optics principles and the fabrication approach for NuSTAR are based on those developed under the HEFT project. Craig serves as the NuSTAR instrument manager while Pivovaroff and LLNL scientist Julia Vogel are part of the optics team.