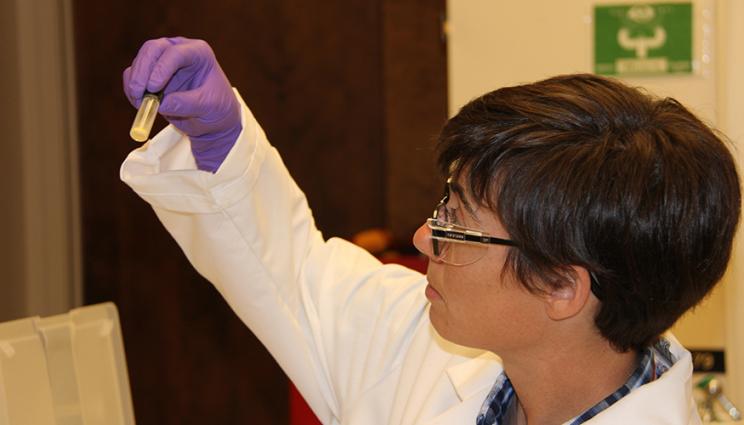 Naomi Marks, a researcher in the Lab’s Chemical and Isotopic Signatures Group, examines a uranium ore concentrate for macro-scale heterogeneities as well as nuclear forensics and provenance assessment purposes.

The event, which was conducted in a virtual setting for the first time, was attended by more than 100 experts from 30 countries and highlighted the group’s notable contributions to international nuclear security.

Established in 1995 when nuclear materials were being smuggled out of the former Soviet Union and into Europe, experts from the Group of Seven created the ITWG to develop and employ technical approaches to counter nuclear smuggling, primarily by strengthening cooperation between law enforcement investigators and scientific experts.

The ITWG was formed largely through the efforts of concerned scientists from the U.S. Department of Energy national labs and the Institute for Transuranium Elements (now Joint Research Center-Karlsruhe) representing the European Commission, with the encouragement of governmental officials. The first meeting of the organization was in 1995 at LLNL and throughout its history, the organization has featured numerous LLNL scientists. 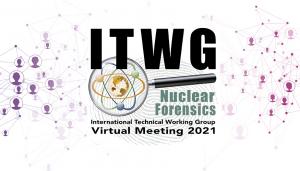 This time was no different as LLNL scientists played key roles in this first-ever virtual meeting, ranging from planning the agenda to serving on panels to helping to develop official documents for the organization. In addition, several members of the ITWG executive committee are current or former LLNL scientists.

LLNL’s David Smith is the outreach task group co-chair of the ITWG and was ITWG co-chairman from 2007 to 2009. Following a 10-year term at the International Atomic Energy Agency (IAEA) as a nuclear security coordinator (forensics), Smith joined the Department of War Studies of Kings College London as a visiting senior research fellow within their Centre for Science and Security Studies.Smith also is a visiting scientist with Global Security at the Lab.

Smith coordinated an engaging retrospective panel on 25 years of the ITWG with founding members including Sid Niemeyer (retired from LLNL) as well as Ben Garrett and Tom Jourdan (both retired from the FBI) and Paul Thompson (of Great Britain’s Atomic Weapons Establishment, or AWE). Niemeyer is a past co-chair of the ITWG and was instrumental in the founding of the organization.

Naomi Marks, a member of LLNL’s Chemical and Isotopic Signatures Group, worked to develop the meeting agenda with the U.S. State Department and the Joint Research Center–Karlsruhe (European Commission) as well as the ITWG executive committee.

In support of the meeting, Marks coordinated the technical presentations and served as moderator for one of the two technical sessions. In addition to this behind-the-scenes work, Marks also co-created a presentation with an AWE colleague.

Marks is the co-chair of the ITWG Nuclear Forensics Laboratories (INFL), an affiliate of the ITWG that exists to advance the measurement science of nuclear forensics for attributing nuclear and radiological material.

Mike Kristo, group leader for LLNL’s Chemical and Isotopic Signatures Group in Nuclear and Chemical Sciences, is the co-chair of the guidelines task group, which oversees the development and adoption of consensus-driven best practices guideline documents.

During the June ITWG meeting, Kristo gave an overview of the forthcoming guidelines, in particular highlighting a guideline aimed at communicating confidence in findings from a nuclear forensic examination.

Ruth Kips, deputy group leader for the Chemical and Isotopic Signatures Group in Nuclear and Chemical Sciences, co-authored a presentation with colleagues from the Institute of Nuclear Physics in Almaty, Kazakhstan as well as the Laboratory for Microparticle Analysis, Moscow, Russian Federation.

The ITWG is a multinational, informal association of official practitioners of nuclear forensics – scientists, law enforcement personnel and regulatory officials – who share a common task in responding to nuclear security events involving nuclear or other radioactive materials out of regulatory control.

Each year the IAEA receives more than 100 confirmed reports of nuclear and other radioactive materials outside regulatory control to include incidents involving smuggling and other illicit activities. To thwart terrorists and deter others from the malicious use of these materials, nuclear forensics is a critical investigative and prosecutorial tool, crucial to nuclear security.

Due to the evolving nature of the threat, the work of the ITWG continues to prepare states to prevent, deter and respond to serious incidents involving these materials.

In addition to its annual meetings, the ITWG has held a range of exercises that have helped identify, develop and socialize best practices in the field of nuclear forensics. More than 300 experts from nearly 60 countries have participated in the ITWG activities.

Their collective work helps strengthen the ability of governments to hold perpetrators accountable for the unauthorized use of nuclear and other radioactive material. The ITWG works closely with the IAEA and Global Initiative to Combat Nuclear Terrorism (GICNT), and its guidance and results have been featured at the IAEA International Conferences on Nuclear Security in 2016 and 2020 as well as the preceding Nuclear Security Summits.

In recognition of the 25th anniversary of the ITWG, the 2022 ITWG meeting will be hosted by LLNL, where the organization was established in 1995.