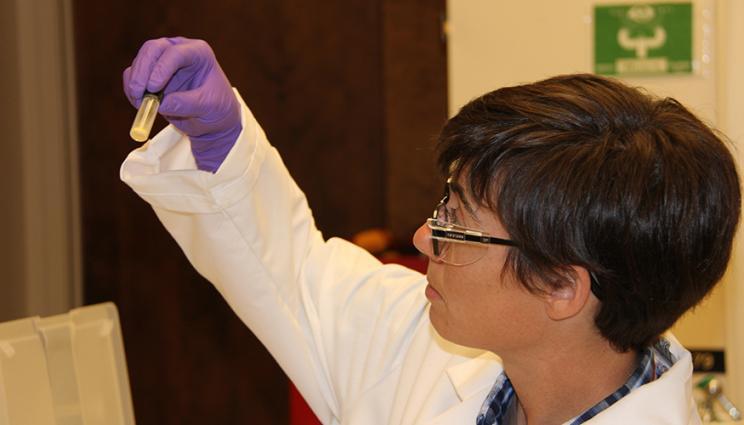 Naomi Marks, a researcher in the Lab’s Chemical and Isotopic Signatures Group, examines a uranium ore concentrate for macro-scale heterogeneities as well as nuclear forensics and provenance assessment purposes.

After a little more than 25 years, the Nuclear Forensics International Technical Working Group (ITWG) is returning to its roots in Livermore, California.

Founded in 1995 during an organizational meeting held at Lawrence Livermore National Laboratory (LLNL), the ITWG met in Europe for 24 straight years from 1996 through 2019.

But this year and this week, the international organization of nuclear forensics scientists will hold its 25th anniversary meeting at the Pleasanton Marriott and visit LLNL, returning to its genesis. The ITWG was scheduled to meet at LLNL in 2020, but because of COVID-19, the group didn’t meet that year and held a virtual meeting in 2021.

“We are all excited and honored to have the ITWG annual meeting return home after 25 years,” said LLNL’s Mike Kristo, the technical host for the meeting and the leader for Lab’s Chemical and Isotopic Signatures Group. 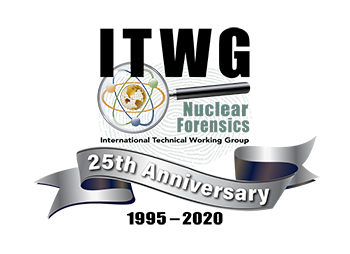 About 70 nuclear forensics practitioners from 20 nations are expected to attend the week-long conference, which will kick off Monday with a reception, followed by three days of meetings and a tour of LLNL facilities on Friday.

The first day of meetings on Tuesday will include welcomes and overviews from the ITWG’s two co-chairs — Klaus Mayer of the European Commission and Joint Research Center (JRC)-Karlsruhe and Michael Curry, senior coordinator for nuclear forensics cooperation from the U.S. State Department.

Other welcomes will be given by Glenn Fox, LLNL’s associate director for Physical & Life Sciences; Ali El-Jaby, the director of the nuclear security division of the Canadian Nuclear Safety Commission; and Andrew Vogt, director of the Office of Nuclear Smuggling Detection and Deterrence (NSDD), in the National Nuclear Security Administration’s (NNSA) Office of Global Material Security.

Retired LLNL nuclear forensics scientist Sid Niemeyer, who helped found the ITWG, will speak to the gathering about “The Early Development of the Science of Nuclear Forensics,” and Kristo will present a talk on “The History of Nuclear Forensics at LLNL.” Two other LLNL researchers — Naomi Marks and Amy Gaffney — will also present technical talks.

Two concurrently run professional development seminars — one on contamination control and the other on the morphology of nuclear materials — will be offered in two languages (English and Russian) during the conference. (Some researchers attending the meeting speak Russian and are from states in the former Soviet Union).

Most ITWG members belong to one or two of the organization’s five task groups, which are Exercises, Libraries, Training and Outreach, Evidence and Guidelines. The task groups will all meet on Wednesday and Thursday.

On Thursday, LLNL Director Kim Budil will address the ITWG, providing an overview of the Laboratory.

During the conference’s last day on Friday, the nuclear forensics researchers will tour LLNL facilities virtually and in-person. The attendees will receive a virtual tour of the National Ignition Facility laser and visit the National Atmospheric Release Advisory Center.

Their day-long visit to LLNL will conclude with a demonstration of Livermore’s Radiological Assistance Program (RAP). RAP is the nation’s premier first-response resource for advising federal, state, local and tribal decision-makers on steps to take to evaluate and minimize the hazards of a radiological or nuclear incident.

Support for the ITWG meeting comes from across the DOE-wide complex, with the national laboratories supporting various aspects of the organization.

In his role as co-lead for the Exercises Task Group, Jon Schwantes of the Pacific Northwest National Laboratory helps design and execute nuclear forensics exercises for the entire ITWG community. The CMX series of exercises has been ongoing every few years since 1995. It has included detailed scenarios and the delivery of materials for analysis to partner labs around the world.

As co-lead for the Libraries Task Group, Steve LaMont of Los Alamos National Laboratory (LANL) has worked to promote the National Nuclear Forensics Libraries concept and best practices. LaMont also has been instrumental in designing and supporting the Galaxy Serpent series of virtual tabletop exercises on nuclear forensics libraries.

Responsibility for technical design of the Galaxy Serpent exercises has rotated, with the first exercise designed by LaMont, the second by David Chamberlain and Jodi Canaday at Argonne National Laboratory and the most recent two have been designed by LLNL’s Marks. Marks is currently designing the next exercise in collaboration with Mitzi Boswell and Jerry Davydov of LANL.

LLNL retired scientist David Smith has supported the Outreach and Training Task Group through the development of communications, newsletters and webinars for the ITWG community. In his role as the Guidelines Task Group co-chair, LLNL’s Kristo has helped to support the development and maturation of consensus guidelines for good practices in nuclear forensics and has ushered numerous guidelines through the publication process.

The technical agenda for the scientific conference was prepared by LLNL’s Marks and Maria Wallenius from JRC-Karlsruhe, who worked with the State Department and the ITWG executive committee.

Much of the funding for this week’s 25th ITWG anniversary meeting has been provided by NSDD.

LLNL’s Julie Marchand has been managing the logistics of the week-long ITWG meeting and has been working for nearly a year to organize hotel contracts, audio-visual equipment and interpreters as well as site access for more than 60 foreign nationals.

Kristo noted that he wanted to acknowledge the vital support from Ruth Kips, the deputy associate program leader for Nuclear Smuggling Detection & Deterrence, in organizing the wide-ranging meeting.

Due to the evolving nature of the threat, the work of the ITWG continues to prepare states to prevent, deter and respond to serious incidents involving these materials.

In addition to its annual meetings, the ITWG has held a range of exercises that have helped identify, develop and socialize best practices in the field of nuclear forensics. More than 300 experts from nearly 60 countries have participated in the ITWG activities.

Their collective work helps strengthen the ability of governments to hold perpetrators accountable for the unauthorized use of nuclear and other radioactive material. The ITWG works closely with the International Atomic Energy Agency (IAEA) and the Global Initiative to Combat Nuclear Terrorism (GICNT), and its guidance and results were featured at the IAEA International Conferences on Nuclear Security in 2016 and 2020 as well as for the 2022 IAEA technical meeting.

“I know that I share the enthusiasm of the entire ITWG membership in being able to meet once again in person, sustaining and developing those personal relationships necessary to advance the science and practice of nuclear forensics throughout the world,” Kristo said.