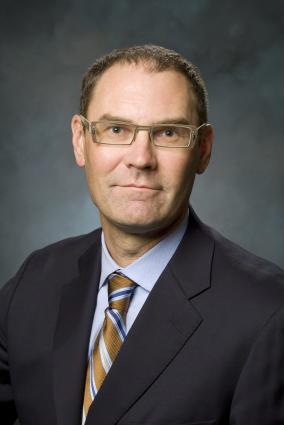 The Washington, D.C.-based Nuclear Threat Initiative (NTI) combines the voices of its experts with projects to reduce the dangers from nuclear, biological, and chemical weapons and material.

That's the view of Lab employee Page Stoutland, who for the past seven months has been serving on a high-level assignment as vice president for the nuclear materials security program at NTI.

Stoutland spoke at the Laboratory in the Bldg. 123 auditorium earlier this month, outlining NTI's achievements since its founding in 2001 and highlighting some of its current activities.

"They (NTI's founders) believed at the time, and still believe today, that there is a real need for a small, agile organization - with adequate resources - that can work to catalyze actions by governments and other international organizations," Stoutland told his audience.

"Their vision was to create an organization that would reduce the threats posed by weapons of mass destruction and work to create the conditions of trust, transparency, and security to allow the ultimate fulfillment of the Nuclear Non-Proliferation Treaty (NPT)."

One of NTI's recent program priorities, Stoutland said, is to enhance cooperation between the United States and Russia in areas outside of Russia. "There are a range of topics for such cooperation, such as working together on combating nuclear smuggling and advancing nuclear forensics."

Currently, NTI is working to pair a non-governmental organization from the United States with one from Russia to produce an action plan for U.S.-Russia cooperation. The partnership will explore the potential for cooperative work in the newly independent states and Southeast Asia.

In addition to collaboration with Russia, NTI is focusing on potential cooperation between the United States and the People's Republic of China on various nuclear security topics.

In discussing some of NTI's achievements, Stoutland pointed out that in 2002, the organization committed $5 million to close a three-way deal between the United States, Yugoslavia, and Russia.

Under the project, nearly 50 kilograms of poorly-secured highly enriched uranium were removed from the Vinca Institute of Nuclear Sciences outside Belgrade to the Research Institute for Atomic Reactors in Dmitrovgrad, Russia, where it was converted into a type of uranium that could not be used in weapons.

"This was a case where a public-private partnership was able to do what everyone agreed would be the best outcome," he said.

In an effort to further enhance nuclear materials security, NTI is working toward the establishment of an international fuel bank, where nations interested in nuclear power could obtain nuclear fuel without developing their own enrichment programs.  Approximately 40 nations are now interested in building their first nuclear power facility, according to the International Atomic Energy Agency (IAEA).

In order to help stem the spread of uranium enrichment technology, NTI, with the support of Warren Buffett, pledged $50 million to the IAEA to assist in creating a low-enriched uranium stockpile for nations willing to rely on foreign suppliers.

Since NTI's announcement in 2006, multiple countries, including the United States, the European Union, Norway, the United Arab Emirates and Kuwait have provided matching funds.  The next step is for the IAEA and its member states to determine and approve the terms of the fuel bank's operation.

As part of his presentation, Stoutland also showed the NTI-produced documentary, "Nuclear Tipping Point," which features former Secretaries of State Henry Kissinger and George Shultz, former Secretary of Defense William Perry, and former Sen. Sam Nunn, NTI's co-chairman, as they discuss their vision of a world free of nuclear weapons and the actions that can be taken toward that end.