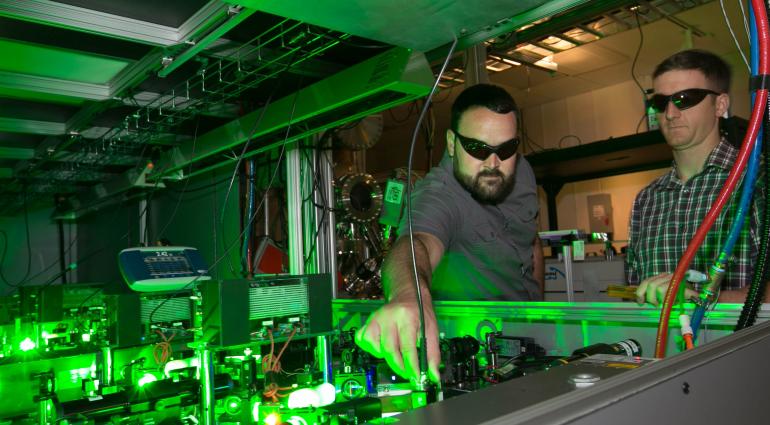 U.S. Army Capt. Drake Brewster sees his academic studies and Lab research of today preparing him for his career of tomorrow.

A seven-year Army officer who is pursuing a career as a nuclear counterproliferation officer, Brewster is studying for his master’s degree in physics from the Monterey, California-based Naval Postgraduate School (NPS).

As part of his studies, Brewster is conducting research with Lab nuclear engineer Brett Isselhardt and his team to advance the technology of LLNL’s Resonance Ionization Mass Spectrometry (RIMS) system.

Like another current NPS student, Lt. Steven Hutchinson of the U.S. Navy, and two NPS students from last year, Brewster is writing his master’s thesis based on the research and studies undertaken using RIMS.

"This is osmosis," Brewster said, reflecting on his time working with LLNL scientists. "There is so much science in that laboratory; if you spend a couple of hours there, you’re going to learn something valuable."

Brewster spent three days in June working with Livermore scientists on the RIMS system, and expects to return for future experiments to assist him in completing his thesis.

He also prepared a poster on the project that was presented last month in Washington, D.C. at a basic science program review for the Defense Threat Reduction Agency (DTRA), the agency that funds the students’ work here.

"The real perk of working here is that even when I can’t spend time with Brett, I can still spend hours working with two Lab Ph.D. scientists (Michael Savina and Andrew Kucher). And they walked me through the intricacies of an important technique," Brewster said.

"In effect, I had the chance to interact with two Ph.D. scientists for hours, as opposed to being in a classroom where there would be one professor working with 20 students."

"It’s also a great thing for me to understand how a national laboratory relates to academic institutions and how they all relate to the mission space of the military. This is helpful to my education and is pure professional development," he said.

The RIMS research is performed using the Lab’s new Laser Ionization of Neutrals (LION) instrument in Bldg. 151, and the system uses lasers to selectively ionize atoms for mass spectrometry analysis.

The aim of the Livermore program is to apply the RIMS technology to study nuclear materials, particularly for pre- and post-detonation nuclear forensics, in addition to analyzing spent fuel from nuclear power plants.

"I think our work with the Naval Postgraduate School has been a good partnership," Isselhardt said. "It’s been great to have some bright, energetic officers work with us to move the application of RIMS to nuclear materials forward."

Craig Smith, a former LLNL nuclear engineer who is now a research professor at NPS, sees the program as a boon to the university. "The chance for our officer-students to join in collaborations with Livermore researchers substantially enriches their research experience."

During their research, the NPS officers have undertaken two principal tasks.

First, they have modeled the process of resonance ionization for plutonium, selectively removing an electron from plutonium atoms in the gas phase. In these experiments, ionization efficiencies and isotope ratios as a function of laser power were measured for a standard sample containing plutonium to provide calibration data for the computational models.

Second, they have studied other possible laser technologies to reduce cost and simplify the process, including using a continuous wave laser to replace one or more pulsed lasers in the LION system.

"Dr. Isselhardt and his colleagues have been very welcoming to us and provided sound technical expertise in this research field. The LION system is really state of the art, and I am very thankful I’ve received the opportunity to conduct research at LLNL," Hutchinson said.

In addition to the NPS master’s students who have conducted or are conducting research at RIMS, NPS also sponsored four interns to work there, three from West Point in 2015 and one from the Naval Academy this year.

LLNL and NPS have collaborated for three years in the research and applications of the RIMS technology. These and similar experiments are expected to continue for another two years with funding from DTRA.

The RIMS technology has the potential to provide a highly sensitive and elementally selective method for the analysis of the relative isotopic content of debris samples from a nuclear detonation or other types of events.