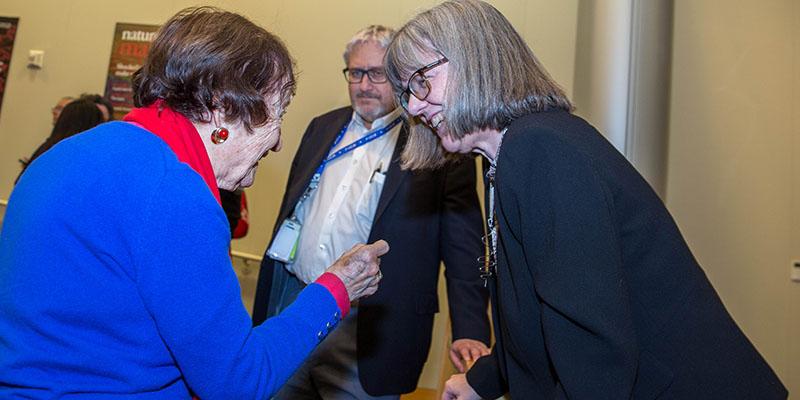 A Nobel story -- from grad school to fairy tale

Lawrence Livermore National Laboratory has a reputation for developing world-leading lasers, ranging from the NOVA Petawatt to today’s ultra-high-peak-power laser systems, such as the Advanced Radiographic Capability and the High-repetition-rate Advanced Petawatt Laser.

What these systems have in common is a foundational technology – chirped-pulse amplification (CPA), which enables the amplification of ultrashort laser pulses to the petawatt level, without destroying the amplifying material.

Donna Strickland, professor in the Department of Physics and Astronomy at the University of Waterloo and a former LLNL staff scientist, was recognized with the 2018 Nobel Prize in physics for this groundbreaking work. She reflected on her research in a recent Director’s Distinguished Lecturer Series (DDLS) address.

While noting that Strickland’s time at LLNL was short (1991-92), Director Bill Goldstein recognized that her impact on the Laboratory is enduring.

"CPA is an advance that is at once incredibly profound and at the same time incredibly elegant, and has made the path possible to intense lasers and all their unique applications, from medicine to scientific discovery," he said. "At this Laboratory, it has been a critical ingredient in advanced laser systems, starting with the first petawatt, demonstrated here at the Lab, right up to this year’s delivery of an exceptional high-average-power petawatt system to the ELI Beamlines facility in Prague."

Goldstein told the audience of his experience representing LLNL at the Nobel Prize ceremony, at Strickland’s invitation, noting that it was truly "a once-in-a-lifetime experience."

"It is very difficult to overstate the feeling of honor, being there to celebrate the advance that Donna made," he said. "It was for me a huge feeling of being witness to history, not only for this prize but the fact that Donna is only the third woman to win the Nobel Prize in physics. Let us hope that this is part of a growing trend."

During her DDLS talk, "From Nonlinear Optics to High Intensity Laser Physics," Strickland took the audience through decades of research in optics and lasers, culminating in her Nobel-winning work, published in 1985 when Strickland was a Ph.D. student at the University of Rochester. She shares the prize with Gérard Mourou, her Ph.D. supervisor and Arthur Ashkin. 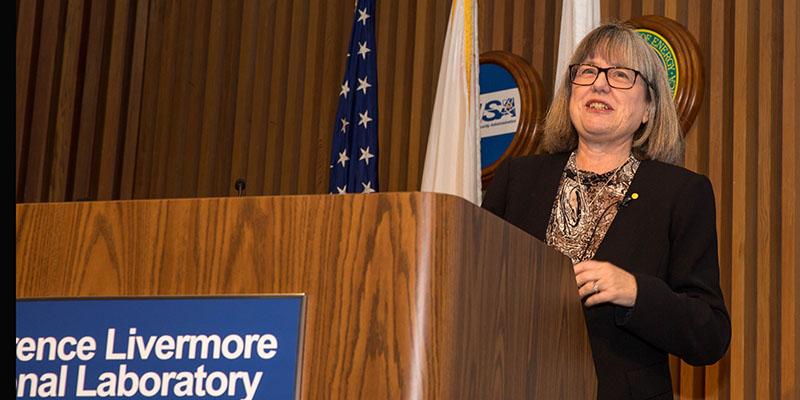 After completing her degree, Strickland was a research associate at the National Research Council, a physicist at Lawrence Livermore and a member of technical staff at Princeton University. In 1997, she joined the University of Waterloo, where her ultrafast laser group develops high-intensity laser systems for nonlinear optics investigations.

"Somehow winning the Nobel Prize takes you on a walk down memory lane," Strickland said, noting that in addition to her visit to LLNL, she’s spoken at her elementary school and the National Research Council, with visits to her high school and the University of Rochester later this year.

During her talk, she also took the audience on a walk through the past, reflecting on historical advances in light, optics and lasers that laid the groundwork for her research, reviewing topics from Maxwell and photoelectric effects to multiphoton physics, nonlinear interaction and the demonstration of the laser. She also highlighted important contributions from scientists such as Albert Einstein, Maria Goeppert Mayer, Peter Franken, Charles Townes, Theodore Maiman and many others.

"I want to honor all of the people who won the Nobel Prize in this field along the way," Strickland said.

After providing the audience with that context, she shifted into a deeper discussion of her own research and the development of CPA, sharing anecdotes of the perils of research, ranging from adventures with fibers, HVAC systems and safety measures of the 1980s.

"There we were in the 1980s – we had big energy lasers, but we couldn’t put short pulses down them, and that’s why we needed CPA," Strickland said. "I like how Bill very nicely called it elegant – he didn’t want to say simple, but that’s what it is. I always like to say that what I built was a laser hammer."

Strickland discovered that by stretching, amplifying and then compressing laser pulses, the intensity could be increased without damaging the amplifying material. Measurements taken in the wee hours of a Thursday night in 1985 proved that CPA worked, laying the foundation for Strickland’s Ph.D. thesis and later, the Nobel Prize.

She closed her talk by sharing a few images from the Nobel celebrations.

"I had a great time with the king," she joked, adding more seriously, "Somehow I went from a grad student trying to do a really good project, to the middle of this fairy tale."

Grounded but flies among the few

You’d never imagine that someone who flies "by the seat of her pants" would win a Nobel Prize.

But that’s exactly what happened to Strickland. "I don’t plan much," the third woman to win the Nobel Prize in physics told an audience during a conversational visit -- following her technical lecture -- with Deputy Director of Science and Technology Pat Falcone and WCI Associate Director Kim Budil.

Strickland and her mentor, French physicist Gérard Mourou, were named Nobel Prize laureates on Oct. 2 for their work in developing chirped-pulse amplification (CPA) to amplify ultrashort laser pulses up to the petawatt (quadrillion-watt) level.

Though winning the Nobel is the ultimate in scientific recognition, Strickland has a good sense of confidence and purpose, yet stays grounded.

"(In school) I was good at so little. I wasn’t an athlete, I played the piano for a while but that didn’t work out," she said. "I’ve had no trouble knowing what I was good at. Even as a child, I heard that a Ph.D. is the ultimate education. My whole life’s goal was to get a Ph.D."

And she did earn her doctorate. – in optical physics from the University of Rochester, home to LLNL’s frequent collaborator, the Laboratory for Laser Energetics (LLE). Her career includes one year at Lawrence Livermore, in 1992, as a staff scientist in the Laser Programs Directorate. Her work was instrumental in the Lab’s development of a series of groundbreaking short-pulse, high-energy laser systems over the past two decades.

At that time Budil was a graduate student working in the short-pulse laser lab under Strickland. While Strickland calls herself more of a recluse and prefers working by herself in a research lab, Budil is more of a people person and Strickland was very encouraging as she struggled with her Ph.D. research. "She told me stop apologizing for being here – I belonged and was contributing in a real way." 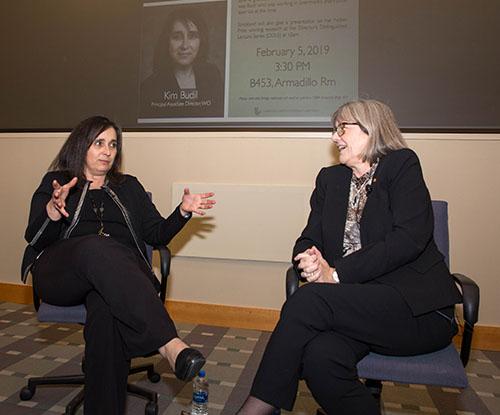 During the afternoon conversation, Strickland touched on her school years, a move from her native Canada to the United States, getting married and having a family and a career path that ultimately put her at the University of Waterloo. Throughout, she displayed a level of humor and confidence in what she set out to do, never letting anything stand in the way.

She recalled telling one teacher that she knew she would have a career in science and math, only to be told "those are boy subjects."

Strickland never sees herself as a woman scientist, but rather a scientist. "Do what you’re good at and don’t let them tell you anything different," she said.

When asked to speak about winning the Nobel, Strickland modestly offers she’s still not sure why she was chosen. Her colleagues would say differently.

CPA is the underlying and enabling technology for all ultra-high-peak-power laser systems, such as LLNL’s Advanced Radiographic Capability (ARC) and High-repetition-rate Advanced Petawatt Laser (HAPLS), as well as in laser eye surgery and ultrafast cameras used for imaging molecular processes. As noted by the Nobel Committee for Physics, the Laboratory’s NOVA Petawatt, the world’s first petawatt laser, was a famous early example of a CPA laser.

After postdoctoral research at the National Research Council in Ottawa, Strickland joined LLNL’s inertial confinement fusion program under Mike Perry, now a vice president at General Atomics in San Diego. She divided her time between work on high harmonic generation in noble gases and helping Todd Ditmire, then a graduate student and now director of the Center for High Energy Density Science at the University of Texas at Austin, build a CPA laser from a new, promising laser material called Cr-doped LiSAF. She contributed to papers on the design and performance of the Cr-doped LiSAF regenerative amplifier, extreme ultraviolet radiation (XUV) in laser-driven plasmas and a compact high-power femtosecond (quadrillionths of a second) laser.

Strickland, born in 1959 in Guelph, Canada, and Mourou published the revolutionary article that would become the basis of Strickland's dissertation in 1985 and lead to her Nobel-winning work.

Anne Stark contributed to this report.

The Nobel Prize in Physics
The Optical Society -- Donna Strickland