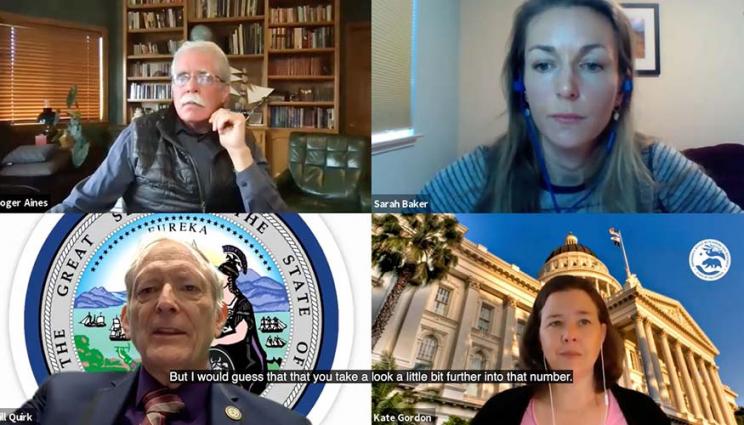 No miracles required: Scientists, industry experts agree California’s carbon capture and storage can be a reality

When it comes to California implementing a carbon capture and storage program to reach the state’s goal of carbon neutrality by 2045, nothing too newfangled needs to take place.

During a forum titled “Carbon Capture and Sequestration in California: Regional Insights and Community Attitudes,” a group of scientists, California policymakers and industry leaders came together to discuss the reality of getting to neutral in the state.

“There are no miracles required. These technologies are proven to work,” said Lawrence Livermore National Laboratory (LLNL) scientist Sarah Baker, lead author of "Getting to Neutral: Options for Negative Carbon Emissions in California.” "And we need engineered solutions and geologic storage —  Mother Nature can’t do it on her own.”

Baker outlined three main technologies that can help the state remove 120 million tons of carbon dioxide per year to reach the state’s goal. They include natural and working lands that naturally store carbon in the ground; conversion of waste biomass to fuels while storing the carbon emitted from the process in geologic formations; and direct air capture and carbon storage from the source such as industry and power plants.

The forum, sponsored by LLNL, the Livermore Lab Foundation and the California Council on Science and Technology, featured speakers highlighting the headway that has been made one year after the "Getting to Neutral" report was released and results from a new report released earlier this month, "Permitting Carbon Capture & Storage Projects in California." The new report outlines updates to regulatory frameworks that push carbon capture technologies forward while safeguarding the environment, public health and safety during these activities.

Carbon capture and storage (CCS) refers to a large family of technologies that remove CO2 from large point sources or from the atmosphere directly, transport it (commonly by pipeline, truck, rail or barge) and then store it permanently and securely thousands of feet underground in the same types of rock formations that have held the carbon for millions of years in the form of fossil fuels. Many of the technologies involved are not new, and a sizable array of demonstration and early commercial-scale projects has emerged over the past two or more decades around the world.

The groundbreaking “Getting to Neutral” report has become a trusted source in the discussion of how to remove carbon dioxide from the air.

“Traditionally California has focused on emission mitigation from specific sources,” said Kate Gordon of the Governor’s Office of Planning and Research. “We need to address the CO2 that’s already in the atmosphere. The report digs into the hard questions of how we get there. In California, we are looking at carbon removal in both sides, in land and carbon storage.”

During a session focused on community attitudes regarding carbon capture and storage, Dave Metz of FM3 Research presented results from a community survey of Delta and Kern County scientists, business owners and residents. “This is something that most of the general public have not begun to grapple with,” Metz said. “But given an introduction to carbon capture and seeing the benefits to the community, I would say there is cautious optimism.”

“A lot of the questions people have are the same: risk, costs, what happens to CO2 when it’s underground, what’s in it for our community,” said Holly Buck, a professor at the University of Buffalo “We need to understand the wider context and concerns in these areas. Communities really want a voice. Community needs to have a sense of empowerment to mitigate the risks.”

The final session focused on opportunities and barriers for CCS in California.

“This decade is critical to hitting that carbon neutrality goal by 2045,” said Rajinder Sahota of the California Resource Board. “It’s not like we can wait until 2030 to hit that target. The conversations in California matter to help inform a national discussion.

California has a huge opportunity and challenge in front of it. The state has an extensive regulatory framework that is rigorous and robust, and capable of protecting human health, safety and the environment. However, this framework may not be fast enough to handle the timely permitting and deployment of sufficient CCS projects to match the rapidly worsening climate and support achieving the state’s climate goals, said George Peridas, LLNL director of carbon management partnerships.

“We have an urgent need to be respectful to local needs and we have some challenges in front of us,” he said. “We have to figure out if [permitting] any of this is feasible. This is a very complex undertaking. We’re not looking at any major changes in regulatory reform but we’ll need cooperation from local, state and national sectors. We have a big opportunity in our hands to do carbon storage.”