Dimitri Kusnezov, chief scientist and director of the Office of Science and Policy for the National Nuclear Security Administration (NNSA), recently visited the Navajo Nation. 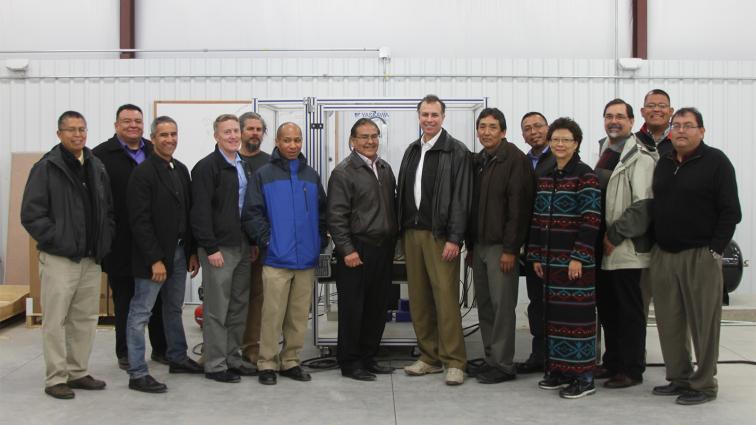 Carrie L Martin, martin59 [at] llnl.gov, 925-424-4715
Dimitri Kusnezov, chief scientist and director of the Office of Science and Policy for the National Nuclear Security Administration (NNSA), recently visited the Navajo Nation in the four corners area to gain a better understanding of tribal efforts in energy and Science, Technology, Engineering and Math (STEM) education.

Steve Grey of the Lawrence Livermore National Laboratory (LLNL) American Indian Program coordinated the visit on behalf of NNSA. Grey manages an office on the Navajo Nation and works with tribes throughout the west. One of the goals of the visit was to see how the three NNSA Laboratory's, LLNL, Los Alamos National Laboratory (LANL) and Sandia National Laboratories (SNL) could assist through their tribal outreach offices in developing a plan outlining how a tribal science and technology initiative could be supported.

Joining the visit were New Mexico congressional representatives, Brian Lee, staffer for Congressman Ben Lujan, and Calvin Curley, staffer for Sen. Tom Udall. Each expressed their appreciation for NNSA having a senior official visit the Navajo Nation and for national laboratories, such as LLNL, partner with tribal institutions. With 36 tribal institutions across the United States, many science and engineering students began their careers at tribal colleges such as Navajo Technical University or Dine College on the Navajo Nation.

"This was a great opportunity for NNSA to see what partnerships the Laboratory has with tribes and tribal institutions," Grey said. "Through the NNSA tribal ST4 initiative we look forward to expanding upon this relationship with the tribal institutions and tribes."

In preparation for the visit, Kusnezov met with several tribal organizations including tribal college president Elmer Guy in Washington D.C. to discuss their efforts in Science, Technology, Engineering and Math (STEM). He also attended a national conference for American Indians in Science and Engineering in Denver, Colo., where he met a number of American Indians in science and engineering and learned of research being done on tribal lands, some of which was supported by DOE and NNSA.

Kusnezov is hoping to address all the tribal college presidents in February at their annual winter meeting in Washington D.C. as well as meet with LLNL, SNL and LANL tribal contacts and discuss the draft framework. Later in the spring, he hopes to meet with selected universities with high Native American populations to get their input regarding a tribal science and technology effort.