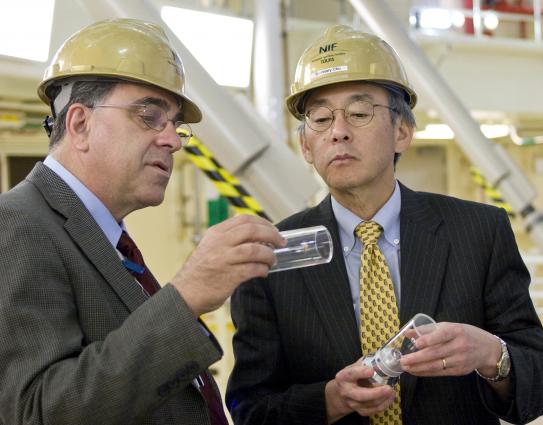 Energy Secretary Steven Chu examines a target for the National Ignition Facility, being held by NIF director Ed Moses. After a tour and briefings at LLNL on Oct. 26, Chu said said of NIF, "It's a marvel." Photo by Jacqueline McBride/LLNL 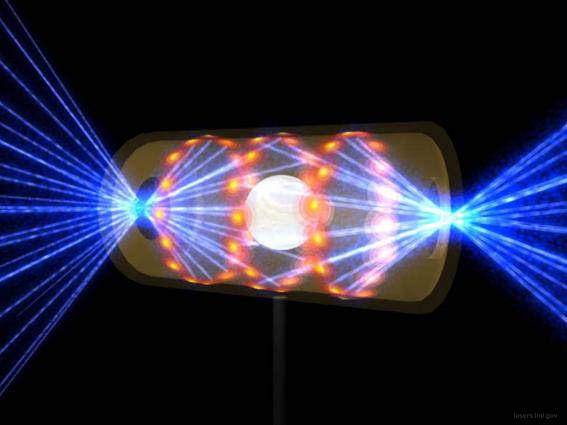 This artist's rendering shows a NIF target pellet inside a hohlraum capsule with laser beams entering through openings on either end. The beams compress and heat the target to the necessary conditions for nuclear fusion to occur.

WASHINGTON, D.C. — This week the National Nuclear Security Administration (NNSA), along with officials from the National Ignition Facility (NIF) at Lawrence Livermore National Laboratory (LLNL), announced an important milestone in the National Ignition Campaign (NIC) at the 51st annual meeting of the American Physical Society Division of Plasma Physics in Atlanta.

The NIF was built as a part of the NNSA's program to ensure the safety, security and effectiveness of the nuclear weapons stockpile without underground testing. With NIF, scientists will be able to evaluate key scientific assumptions in current computer models, obtain previously unavailable data on how materials behave at temperatures and pressures like those in the center of a star, and help validate NNSA's supercomputer simulations by comparing code predictions against observations from laboratory experiments.

Because of its groundbreaking advances in technology, NIF also has the potential to produce breakthroughs in fields beyond national security. It will help advance fusion energy technology, which could be an element of making the United States energy independent. It also will enable scientists to better understand the makeup of stars in the universe and planets both within and outside our solar system.

"The developments announced this week demonstrate exciting progress toward the grand scientific challenge that is fusion ignition on the National Ignition Facility," said Brig. Gen. Garrett Harencak, NNSA Principal Assistant Deputy Administrator for Military Application. "NIF will be a cornerstone of a critical national security mission, ensuring the continuing reliability of the U.S. nuclear stockpile without underground nuclear testing, while also providing a path to explore the frontiers of basic science, and potential technologies for energy independence. It is a prime example of how our investment in nuclear security is providing the tools to tackle a broad range of national challenges."

The results announced this week demonstrate that NIF is capable of fulfilling a key requirement of the fusion process. To achieve fusion, NIF will focus its 192 laser beams, in a few billionths of a second, into a pencil-eraser-sized metal cylinder containing a small fuel capsule to create a small star about the diameter of a human hair which, when successful, releases more energy than the laser energy used to create it.

One of the key requirements for this process is to create sufficient x-ray energy to drive the fuel implosion. In a series of experiments that began shortly after the facility was dedicated in May, NIF researchers have been focusing on characterizing the x-ray drive created in test targets. Recent tests at the NIF have shown that the NIF laser beams can be effectively delivered and are capable of heating the targets to the radiation temperatures needed to drive fuel capsules to ignition conditions.

"These are very exciting results," said NIF Director Ed Moses. "The NIF laser is proving to be robust with very precise and repeatable performance. We have demonstrated most aspects of target fabrication and are integrating and using the diagnostics we need for initial ignition test experiments later next year."

Established by Congress in 2000, NNSA is a semi-autonomous agency within the U.S. Department of Energy responsible for enhancing national security through the military application of nuclear science in the nation's national security enterprise. NNSA maintains and enhances the safety, security, reliability, and performance of the U.S. nuclear weapons stockpile without nuclear testing; reduces the global danger from weapons of mass destruction; provides the U.S. Navy with safe and effective nuclear propulsion; and responds to nuclear and radiological emergencies in the U.S. and abroad.