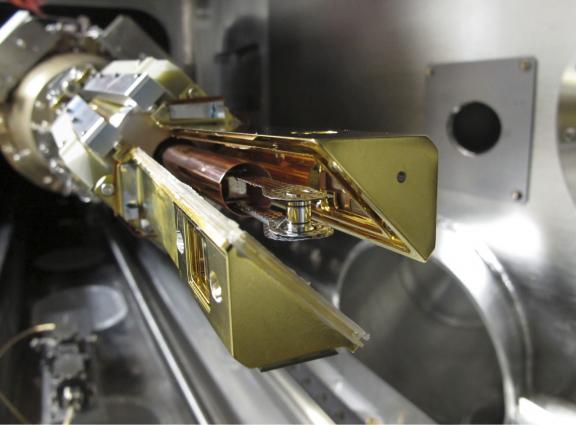 Before the shot: The target is mounted in the cryogenic target positioning device. The two copper-colored arms form a shroud around the cold target to protect it until they open five seconds before a shot. 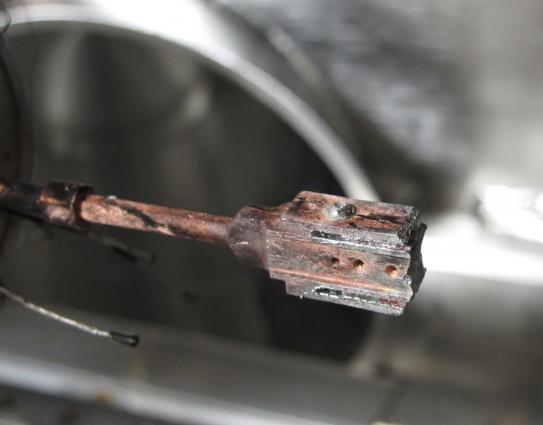 After the shot: The remains of the target assembly.

WASHINGTON, D.C. – The National Nuclear Security Administration (NNSA) and Lawrence Livermore National Laboratory (LLNL) today announced that the National Ignition Facility (NIF) recently completed its first integrated ignition experiment. In the test, the 192-beam laser system fired 1 megajoule of laser energy into its first cryogenically layered capsule, raising the drive energy by a factor of thirty over experiments previously conducted at the Omega laser at the University of Rochester. With the completion of this test, NIF is beginning its next phase of the campaign to culminate in fusion ignition tests.

"NIF is an example of what the NNSA labs do best," said NNSA Deputy Administrator for Defense Programs Don Cook. "We are bringing together the best minds in science, engineering and technology to solve some of the nation’s greatest challenges.

With NIF, the nation has a critically important asset that supports our national security priorities, pushes the frontiers of science and discovery, and carries the potential for critical advances in energy security."

NIF, the world’s largest and highest-energy laser system, is expected to be the first laser system to demonstrate reliable fusion ignition – the same force that powers the sun and the stars – in a laboratory environment. When NIF’s lasers fire, more than one million joules of ultraviolet energy are focused into a pencil-eraser-sized gold cylinder that contains a peppercorn-sized plastic capsule filled with the hydrogen fuel.

The experiment demonstrated the integration of the complex systems required for an ignition campaign. This target was filled with a mixture of tritium, hydrogen and deuterium tailored to enable the most comprehensive physics, a necessary step on the path to demonstrating fusion ignition. All systems operated successfully, and 26 target diagnostics participated in the shot.

"From both a system integration and from a physics point of view, this experiment was outstanding," said Ed Moses, Director of the National Ignition Facility. "This is a great moment in the 50-year history of inertial confinement fusion. It represents significant progress in our ability to field complex experiments in support of our NNSA Stockpile Stewardship, Department of Defense, fundamental science and energy missions."

NIF was built as a part of the NNSA’s program to ensure the safety, security and effectiveness of the nuclear weapons stockpile without underground testing. With NIF, scientists will be able to evaluate key scientific assumptions in current computer models, obtain previously unavailable data on how materials behave at temperatures and pressures like those in the center of a star, and help validate NNSA’s supercomputer simulations by comparing code predictions against laboratory observations. Other missions include advancements in fusion energy technology and enabling scientists to better understand the makeup of stars in the universe and planets both within and outside our solar system.

The experimental program to achieve fusion and energy gain, known as the National Ignition Campaign, is a partnership among LLNL, the Laboratory for Laser Energetics at University of Rochester, Los Alamos and Sandia National Laboratories, and General Atomics. Other contributors include the Massachusetts Institute of Technology, the Atomic Weapons Establishment (UK), Commissariat à l'énergie atomique (France) and many others.

Established by Congress in 2000, NNSA is a semi-autonomous agency within the U.S. Department of Energy responsible for enhancing national security through the military application of nuclear science in the nation’s national security enterprise. NNSA maintains and enhances the safety, security, reliability, and performance of the U.S. nuclear weapons stockpile without nuclear testing; reduces the global danger from weapons of mass destruction; provides the U.S. Navy with safe and effective nuclear propulsion; and responds to nuclear and radiological emergencies in the U.S. and abroad.