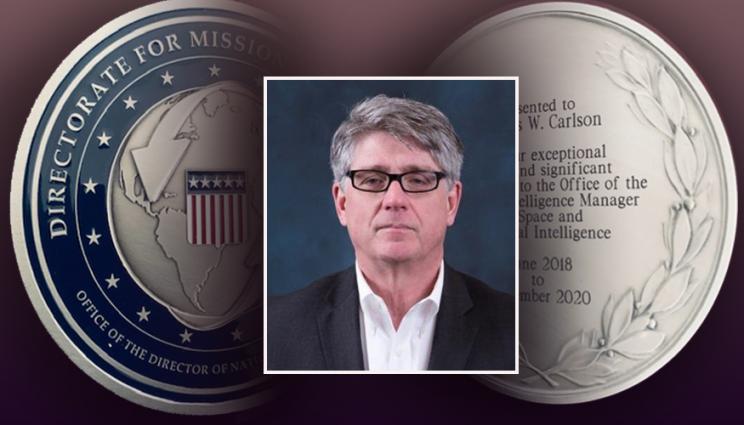 Nils Carlson has received the Office of the Director of National Intelligence award for exceptional service.

Lawrence Livermore National Laboratory's (LLNL) Nils Carlson has received the Office of the Director of National Intelligence (ODNI) award for exceptional service while on assignment with ODNI.

The citation notes that Carlson successfully leveraged his expert knowledge of Intelligence Community (IC) integration issues affecting the mission area in order to advise ODNI on effective resource approaches and mitigation measures. Carlson’s ability to foster collaboration and create an atmosphere of transparency within the ODNI and across the IC was instrumental in achieving breakthrough intelligence insights.

A second award was presented to Carlson in recognition of his exceptional service and significant contributions to the Office of the National Intelligence Manager for Space and Technical Intelligence (S&TI) between June and September 2020.

Carlson, who has returned to the Lab full time had been on assignment with ODNI as the National Intelligence Manager for S&TI. Carlson’s role was to ensure the IC S&TI community was integrated, used resources effectively, had the expertise and authority needed to deliver decision- and operational-advantage on foreign space, counterspace and other global technology developments that affect U.S. national and economic security.

Carlson said it was an honor to have worked at ODNI and to have received the award.

ODNI had reached out to Carlson based on his technical qualifications, previous experience as deputy national intelligence officer for Scientific and Technical Intelligence at the National Intelligence Council, and for his leadership of LLNL’s Intelligence Programs.

“This two-year assignment enabled me to provide LLNL enhanced situational awareness for the LLNL Space Science and Security Program as well as LLNL’s role in understanding and anticipating threats to national security posed by emerging and disruptive technologies,” he said. “Off-site assignments are valuable because they give you a view to the future, beyond what is possible at the Lab, on where LLNL and other FFRDC sponsors and customers are going with national security priorities.”

Since returning to LLNL, Carlson said he has worked on applying the experience and view-to-the-future he gained to help the Lab get a “leg up” on developing a plan and response to likely upcoming requests from government customers and sponsors on whole-of-government efforts to support the nation’s response to the global competition in S&T.