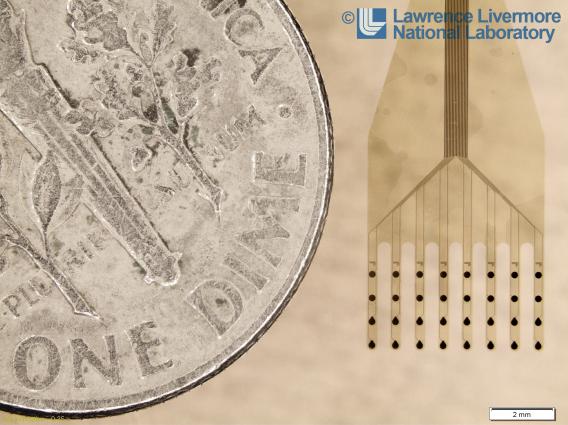 This image gives perspective of how tiny the electrode arrays are when compared to a dime. Graphics by Kwei Chu/LLNL

Lawrence Livermore National Laboratory is developing a neural measurement and manipulation system -- an advanced electronics system to monitor and modulate neurons -- that will be packed with more than 1,000 tiny electrodes embedded in different areas of the brain to record and stimulate neural circuitry. 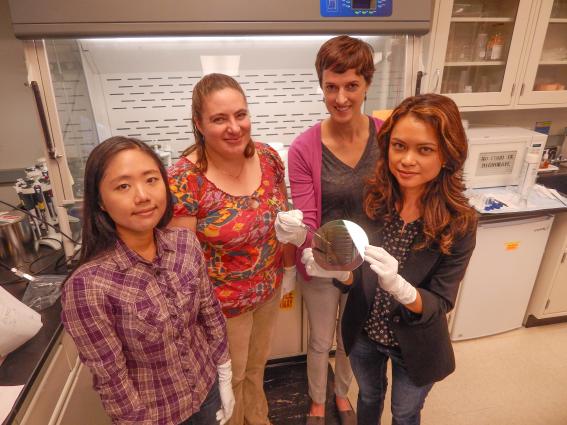 LIVERMORE, Calif. - The National Institutes of Health (NIH) awarded Lawrence Livermore National Laboratory (LLNL) a grant today to develop an electrode array system that will enable researchers to better understand how the brain works through unprecedented resolution and scale.

The agency announced its first wave of investments totaling $46 million in FY14 funds to support the BRAIN Initiative's goals. More than 100 investigators in 15 states and several countries will work to develop new tools and technologies to understand neural circuit function and capture a dynamic view of the brain in action.

"The human brain is the most complicated biological structure in the known universe. We've only just scratched the surface in understanding how it works -- or, unfortunately, doesn't quite work when disorders and disease occur," NIH Director Francis S. Collins said. "There's a big gap between what we want to do in brain research and the technologies available to make exploration possible. T hese initial awards are part of a 12-year scientific plan focused on developing the tools and technologies needed to make the next leap in understanding the brain. This is just the beginning of an ambitious journey and we're excited about the possibilities."

Lawrence Livermore is developing a neural measurement and manipulation system -- an advanced electronics system to monitor and modulate neurons -- that will be packed with more than 1,000 tiny electrodes embedded in different areas of the brain to record and stimulate neural circuitry. The goal is to develop a system that will allow scientists to simultaneously study how thousands of neuronal cells in various brain regions work together during complex tasks such as decision making and learning.

The biologically compatible neural system will be the first of its kind to have large-scale network recording capabilities that are designed to continuously record neural activities for months to years.

"This is an incredible opportunity for us to develop a technology that is going to advance neuroscience research for the community," said Vanessa Tolosa, an engineer at LLNL's Center for Bioengineering who is a principal investigator on the project. "The brain is a dynamic and complicated system. Though neuroscientists have uncovered a lot about the brain in the last couple of decades, there is a pressing need for new technologies that'll enable us to study more brain regions over longer periods of time."

The NIH project is a collaboration between LLNL's Neural Technology Group; the laboratory of Loren Frank at University of California, San Francisco (UCSF); Intan Technology; and SpikeGadgets.

Housed at the Center for Bioengineering, the Neural Technology Group will work with UCSF researchers to design and build electrode arrays that can record hundreds to thousands of brain cells simultaneously. Their goal is to develop 1,000-plus channel arrays that can eventually be expanded to 10,000 channels.

These arrays will use new microchips designed at Intan and will send data to a system developed at SpikeGadgets. UCSF will coordinate these efforts and test the technologies. The arrays will penetrate multiple regions of the brain without interfering with normal functions during the experiments, allowing for detailed studies of brain circuits that underlie behavior.

"This collaboration combines the engineering talent of LLNL with UCSF's expertise in neural recording and modulation systems, and the design and programming skills of Intan and SpikeGadgets," Frank said. "The result will be a system that will help us understand how different brain areas communicate and carry out complex mental functions."

The system also will be designed for compatibility with optogenetic stimulation, a technique that uses light sensitive proteins and light to manipulate neural activity. This technique allows researchers to target specific neurons or cells for recording.

Using the Center for Bioengineering's unique microfabrication capabilities,Tolosa and her colleagues have achieved multiple patents and publications during the last decade. The team's ultimate goal is to launch a complete, modular and open source system that would be available to any neuroscientists interested in large-scale neural recording and modulation.

LLNL's project is one of 58 BRAIN-related projects funded by NIH.The others include creating a wearable scanner to image the human brain in motion, using lasers to guide nerve cell firing, recording the entire nervous system in action, stimulating specific circuits with radio waves and identifying complex circuits with DNA barcodes. The majority of the NIH grants focus on developing transformative technologies that will accelerate fundamental neuroscience research and include: