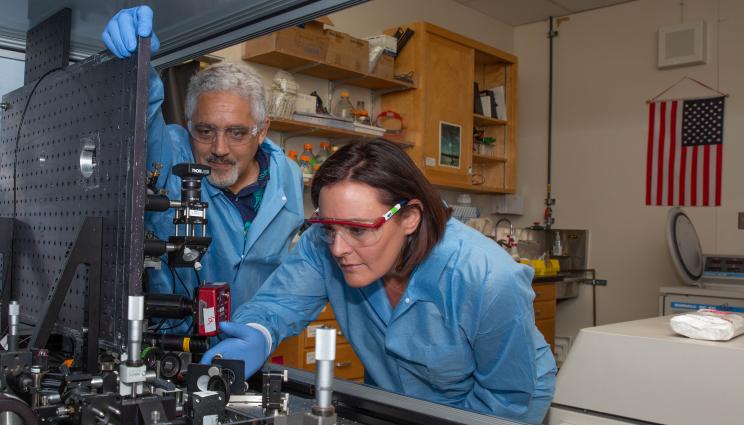 A cooperative research center that aims to develop vaccines for chlamydia has been established by the National Institutes of Health at Lawrence Livermore National Laboratory (LLNL).

The new center, to be funded under a five-year, $10.1 million grant from the National Institute of Allergy and Infectious Diseases (NIAID), will be a three-way partnership between LLNL and researchers from two University of California campuses — Irvine (UCI) and Davis.

“LLNL is extremely pleased to be named an NIH Cooperative Research Center, focused on developing new vaccines to prevent diseases that potentially touch so many lives,” said Kris Kulp, the acting leader of the Lab’s Biosciences and Biotechnology Division.

“This project capitalizes on a wealth of expertise that our scientists have worked hard to build over the last decade and will help develop LLNL capabilities to create novel treatments for other diseases of national security interest,” Kulp added.

It is led by two co-directors — Matt Coleman, an LLNL biomedical scientist, and Luis de la Maza, a pathologist at UCI and a worldwide leading expert in chlamydia biology.

“I am very happy that the NIH has established a center for the formulation of a chlamydia vaccine,” de la Maza said. “This is a great opportunity. The collaboration between three institutions will have a much better chance of developing a vaccine than the individual institutions working independently.”

Coleman called the establishment of the new center something that is “very exciting” for the Livermore scientists who will work on the vaccine.

“This grant means that the NIH and our scientific peers outside the Lab recognize that LLNL has technology and unique scientific expertise that can help meet national needs,” Coleman said.

The team of scientists will build on a nanotechnology — called nanolipoprotein particles (NLPs) — that was developed at LLNL for delivering vaccines and drugs inside the human body.

NLPs are water-soluble molecules that are 6 to 30 billionths of a meter in size and resemble HDL particles, which are associated with playing a role in regulating the human body’s good cholesterol. LLNL scientists have worked on this nanotechnology, also known as nanodisc, since 2005.

They will use the NLPs to investigate surface-exposed proteins within the outer membrane of Chlamydia trachomatis, the bacterium that causes chlamydia, because they believe those proteins could serve as novel formulations for a vaccine.

As envisioned, the vaccine could be given to people so that they don’t contract chlamydia and are protected from the negative consequences of an infection.

UCI scientists will focus on developing models that mimic the response of chlamydia human infections, which will enable Livermore researchers to refine nanoparticle formulations developed at LLNL. Two UC Davis Health researchers — biostatistician Laurel Beckett and immuno-pathologist Alexander “Sandy” Borowsky — will devote their efforts to the safety and efficacy of the vaccine formulations.

Chlamydia trachomatis is the most common sexually transmitted bacterial pathogen in the world. The U.S. Centers for Disease Control and Prevention estimate that at least 1.7 million cases of chlamydia were diagnosed in the United States in 2017, 45 percent of which were in women aged 15 to 24 years old.

Most infections are asymptomatic, but untreated chlamydia infections in women can lead to pelvic inflammatory disease or infertility and have been linked to ovarian cancer.

In Coleman’s view, LLNL’s work to develop vaccines and use the NLPs as a delivery system will offer broad applications for bioenergy, biodefense and biomedical engineering.

Among the LLNL capabilities that will be used for the center are: the NLPs delivery system, the ability to connect technology with academic and industrial partners and the technology to produce and characterize membrane-bound proteins, which are key to making a successful vaccine, Coleman said.

In combination with the work by researchers to develop a chlamydia vaccine, an internal three-year LLNL research project will focus on what the future of vaccines will be in 5-10 years.

“Through a Laboratory Directed Research and Development (LDRD) project, we’re focusing on what it’s going to take for LLNL to help develop the next generation of vaccines,” said LLNL biomedical scientist Nick Fischer. “While independent from the NIH program, this project aims to develop complementary approaches to vaccine development that can be applied to diseases like chlamydia.”

The focus of the LDRD project is to use the NLPs to deliver large messenger RNA molecules to the body. When these RNA molecules get into the body’s cells, they in turn use the cells’ machinery to produce the protein antigen locally.

“The Lab is interested in the RNA delivery approach for vaccine development for broad use in the future,” Fischer noted.