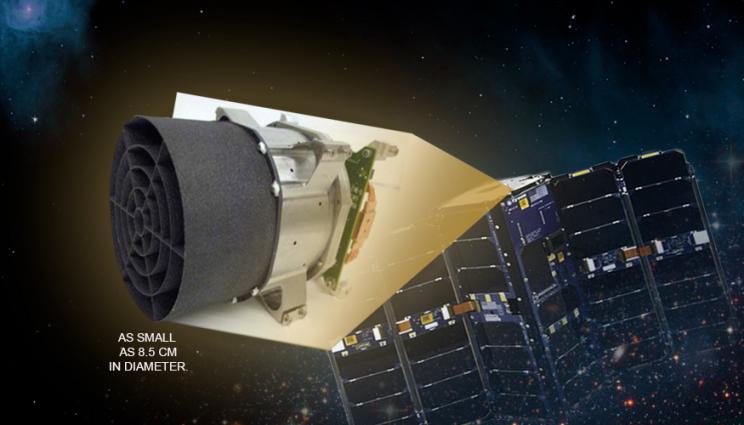 A LLNL-developed monolithic telescope is 8.5 centimeters in diameter and is mounted on a nano-satellite developed by Tyvak. The demonstration system was launched earlier this year.

Night or day, Lab-developed space-based telescope can image Earth and beyond

Lawrence Livermore National Laboratory (LLNL) researchers have developed and tested an optical telescope system that can be used for Earth and space observation.

After successfully testing one of the designs in 2016 on a high-altitude NASA aircraft, the Livermore team partnered with Tyvak, a commercial satellite developer, to integrate the monolithic telescope into a "CubeSAT" (a type of modularized miniaturized satellite).

"These designs are extremely compact compared to conventional telescopes and robust against vibration loads and temperature swings," de Vries said.

The lightweight telescope measures as small as 8.5 centimeters in diameter and is so compact that the satellite it is mounted on can be smaller than traditional space vehicles.

This demonstration system, which was launched in early 2018 into low-Earth orbit, has produced excellent imagery of both stellar fields and ground targets. Potential applications under consideration for the low-cost imaging system include commercial and government Earth observation, space debris detection and tracking and astronomical science observations.

One advantage of the telescope is that it can take images of space in daytime and night during its 95-minute orbit of Earth, whereas terrestrial telescopes can only take images at night.

"It really helps fill in the coverage gaps of ground-based telescopes," de Vries said. "We were very pleased with the optical performance of the system on-orbit."

The demonstration raises the technical maturity of the monolithic telescope technology, leading to new opportunities to insert LLNL imaging payloads in other satellite development efforts.

The idea for the monolithic telescope was originally conceived and proven with support from the Laboratory Directed Research and Development Program.