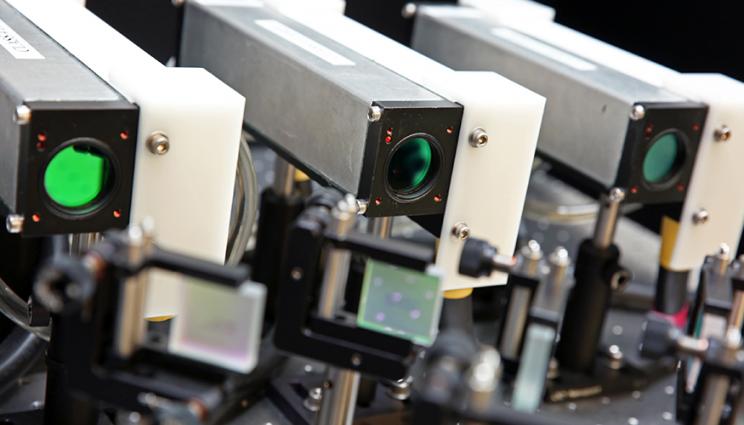 In Diode-based Additive Manufacturing, the laser light is sourced by a set of four diode laser arrays and a pulsed laser. It passes through the Optically Addressable Light Valve, which patterns an image of a two-dimensional “slice” of the desired 3D part. The laser then flash prints an entire layer of metal powder at a time, instead of scanning with a laser as with traditional selective laser melting systems. Photos by Kate Hunts/LLNL

A technology originally developed to smooth out and pattern high-powered laser beams for the National Ignition Facility (NIF) can be used to 3D print metal objects faster than ever before, according to a new study by Lawrence Livermore researchers.

A team of Lab scientists report the findings in the latest issue of Optics Express, published online on May 15. This new method -- Diode-based Additive Manufacturing (DiAM) -- uses high-powered arrays of laser diodes, a Q-switched laser and a specialized laser modulator developed for NIF to flash print an entire layer of metal powder at a time, instead of raster scanning with a laser across each layer, as with conventional laser-based powder-bed fusion additive manufacturing (PBFAM) systems.

The result, researchers said, is the possibility that large metal objects could be printed in a fraction of the time needed for metal 3D printers on the market today, expanding possibilities for industries requiring larger metal parts, such as aerospace and automotive. The combination of speed and degree of design flexibility afforded through the DiAM method, the team concluded, is potentially "far beyond" that of current powder-bed fusion-based systems.

"By cutting the print time and having the ability to upscale, this process could revolutionize metal additive manufacturing," said Ibo Matthews, an LLNL scientist heading the research and the paper’s lead author. "The illumination time savings, we estimate, is such that a one cubic meter build that would require 10 years of raster-scanned illumination to make would require only a few hours with DiAM, because you can image each layer at once. Printing with a gray-scaled image may also allow you to reduce residual stress because you can tailor the thermal stresses spatially and temporally." 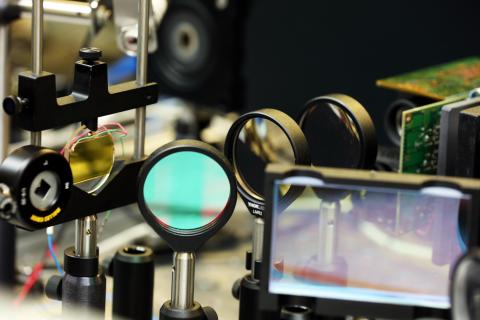 The "magic" of the process, Matthews said, is the implementation of a customized laser modulator called an Optically Addressable Light Valve (OALV), which contains a liquid crystal cell and photoconductive crystal in series. Much like a liquid crystal-based projector, researchers explained, the OALV is used to dynamically sculpt the high-power laser light according to pre-programmed layer-by-layer images. But unlike a conventional liquid crystal projector, the OALV is un-pixelated and can handle high laser powers.

The technology was originally designed for and installed in NIF as part of the LEOPARD (Laser Energy Optimization by Precision Adjustments to the Radiant Distribution) system, which was deployed in 2010 and won an R&D 100 award in 2012. In NIF, the OALV is used to optimize the profile of the laser beams and locally shadow and protect optics subjected to higher intensities and fluences (or energy density -- the amount of laser energy for a given unit area). With LEOPARD, NIF electronically protects regions of its beams containing potentially threatening flaws on its final optics, as identified by the Final Optics Damage Inspection (FODI) system. This enables NIF to continue firing until the schedule allows those optics to be removed, repaired and reintroduced into the beamline.

The team that first demonstrated the light valve could be used for printing parts was initially led by James DeMuth, a former LLNL researcher. John Heebner, the LLNL scientist that led the development of the OALV described its use in metal 3D printing as a "natural synergy."

"The DiAM project marries two technologies that we’ve pioneered at the Lab – high-power laser diode arrays and the OALV," Heebner said. "Given that we put all this time and development into this light valve, it became a natural extension to apply it to this project. We went through some calculations and it was clear from the outset that it would work (with 3D printing). The ability to change a serial process to a parallel process is critical to ensuring that as parts increase in complexity or size that the patterning process speed can be increased to catch up."

Besides the ability to potentially produce larger parts, using such a valve results in imaging quality that rivals and could exceed today’s metal 3D printers, and the ability to fine-tune gradients in the projected image means better control over residual stress and material microstructure, researchers said.

With DiAM printing, the laser light is sourced by a set of four diode laser arrays and a nanosecond pulsed laser. It passes through the OALV, which patterns an image of a two-dimensional "slice" of the desired 3D part. The images go from a digital computer file to the laser in a two-stage liquid crystal modulation process. In the first stage, the images are sourced from a digitized CAD model and imprinted on a low-power blue LED source using an ordinary, pixelated liquid crystal projector. In the second stage, the blue images activate the OALV’s photoconductive layer creating local conductive patches (where blue light is present) that transfer voltage to its liquid crystal layer. This enables the low power blue images to modulate the high-power laser beam. The beam is then directed onto a build plane, printing the entire metal layer at once. For the study, the researchers used tin powder, successfully demonstrating the printing of two small 3D models, an impeller (a small turbine blade structure) and LLNL logo.

While speeding up the metal additive process was a main driver for pursuing the technology at LLNL, the larger build size could potentially have significant value for the Lab’s core mission of stockpile stewardship, the researchers said. The laser diodes – which provide most of the energy compared to the pulsed laser system – are also cheap to purchase, so such a system would be more cost-effective than fiber laser-based machines on the market today.