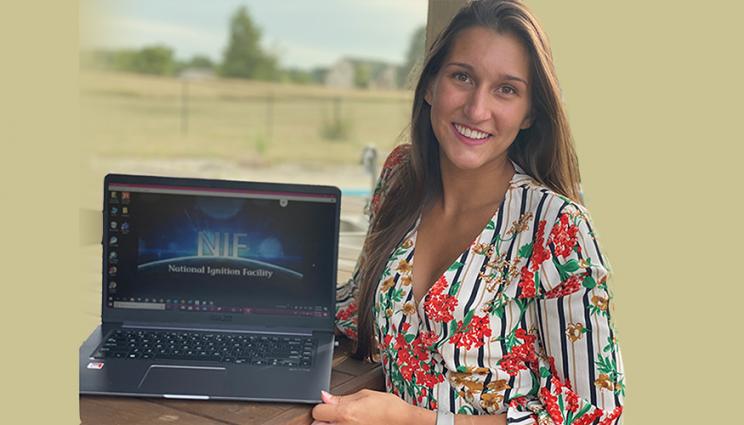 Alexus “Lexi” Warchock was initially disappointed when she learned the NIF & Photon Science Summer Scholar Program would be continuing — but as a virtual internship.

“I was upset knowing I would miss out on seeing firsthand the amazing (Lab) facility and interacting with other Lab employees,” the University of Michigan-Dearborn senior said. “My dream of moving out from Michigan and living in California was crushed. But after the initial shock, I realized that the move to remote was really the best option I could have hoped for.”

Her successful internship turned into a part-time job at Lawrence Livermore National Laboratory (LLNL) through May 2021 while she continues pursuing a dual major in bioengineering and mechanical engineering at UM-Dearborn.

“Had I not worked remotely, my internship would have ended in the summer,” Warchock said. “I now have the amazing bonus of being able to work through the school year and continue to gain experience. And I cannot speak highly enough of my mentor (Cory Waltz) and team members. They were exceptional at making me feel welcome, supporting me and my project and are all very talented at what they do.”

Waltz, in turn, praised Warchock’s work. “I am excited that Lexi has been able to continue working part-time with the Lab while also continuing on with school,” he said.

Warchock was one of the 78 college and graduate students who experienced an all virtual NIF&PS summer internship this year, according to Summer Scholars Program Director Patrick Poole (see “NIF&PS Summer Internship Program Goes on—Virtually”).

Warchock’s initial in-house project was working with the nTOF (neutron Time-of-Flight) diagnostic to develop and test a two-omega (2ω or green light) laser fiducial injection system. But that was modified to a project on the Neutron Imaging System (NIS), which captures an image of the volume of neutrons generated by the fusion of hydrogen atoms in a NIF inertial confinement fusion implosion. This is achieved by three nearly orthogonal NIS legs, each capturing a 2D image that can be reconstructed into a 3D visualization of the neutron-emitting volume.

Each leg contains a pinhole array (PHA) that acts as the imaging aperture that is crucial to the function of the NIS. The PHA blocks neutrons from traveling down the NIS line of sight. The NIS manipulator must be capable of aligning imaging apertures along that line of sight to tolerances on the scale of 100 microns, which is about the average thickness of a strand of human hair.

Completing a project from 2,400 miles away

NIF researchers previously developed three possible concepts for the manipulator and determined some system requirements. Warchock began her internship analyzing each concept to determine if it met the necessary requirements. After a preliminary analysis, she determined that each concept had at least two criteria that failed the test.

She began modifying each concept to meet the requirements and spent most of her internship thinking of ways to adapt the original concepts, including various drive mechanisms and altering computer-aided design (CAD) models.

She then created a Pugh Matrix — a method to analyze and rank several design candidates — to determine which concept was best suited for the team’s needs and presented her findings in the Neutron Imaging System 1 Upgrade conceptual design review. She spent the last few weeks of her internship further optimizing the design.

Finally, she created a cross-coupling table for the NIS manipulator that calculated the exact number of steps necessary for the diagnostic instrument manipulator (DIM) that inserts the NIS into the Target Chamber and NIS manipulator motors to produce a specific amount of pitch, yaw, and x-, y- or z-adjustments.

The DIM is a large telescoping arm that positions various diagnostic packages.The limitation of using only the DIM for alignment is that the rotational movement is coupled to translational movement, Warchock said. To decouple the translational motion from rotation, the NIS manipulator was attached and works to align the snout.

Warchock easily worked on CAD modeling and engineering calculations using Amazon WorkSpaces, a secure cloud desktop service. “She integrated with the project team easily even though she was in the Eastern time zone. Lexi’s work was very important to our project, proving that remote internships can add a lot of value to the Lab,” Waltz said.

Warchock participated in “Touch Base Tuesdays,” an hour for students to meet virtually and chat. Several group chats also were available, such as a Microsoft Teams page for the Laser Systems Engineering Operations division and a Discord server, a group chatting platform similar to Microsoft Teams.

Warchock pointed out another strength of the virtual program.

“This internship, specifically in its remote setting, was effective in supporting growth of the ability to work independently,” she said. “Being in a different time zone, there were at least three hours each day that I had no access to any team members. Those three hours were an added challenge that really added value to my overall experience since I was developing the skills to problem solve on my own.”

She also said she picked up “valuable work-from-home skills and tools such as giving virtual presentations, running virtual meetings and general resourcefulness for solving technology.”

Her current work for the Lab will be conducted virtually for now, but she said “if offered the opportunity to visit or work at the Lab next summer, I would gladly accept.”