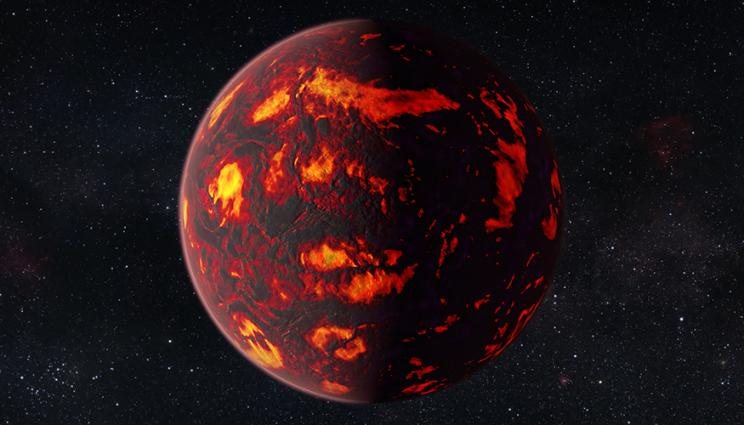 An artist’s rendering of 55 Cancri e, a carbon-rich exoplanet. For the first time in a laboratory setting, experiments conducted at the National Ignition Facility through the Discovery Science program reach the extreme pressures relevant to understanding the structure of carbon that sits in the interior of exoplanets. Credit: ESA/Hubble/M. Kornmesser.

Carbon is one of the most ubiquitous elements in existence. As the fourth most abundant element in the universe, a building block for all known life and a material that sits in the interior of carbon-rich exoplanets, the element has been subject to intense investigation by scientists.

Decades of studies have shown that carbon’s crystal structure has a significant impact on material properties. In addition to graphite and diamond, the most common carbon structures found at ambient pressures, scientists have predicted several new structures of carbon that could be found above 1,000 gigapascals (GPa). These pressures, approximately 2.5 times the pressure in Earth’s core, are relevant for modeling exoplanet interiors but have historically been impossible to achieve in the laboratory.

That is, until now. Under the Discovery Science program, which allows academic scientists access to Lawrence Livermore National Laboratory’s (LLNL) flagship National Ignition Facility (NIF), an international team of researchers led by LLNL and the University of Oxford has successfully measured carbon at pressures reaching 2,000 GPa (five times the pressure in Earth’s core), nearly doubling the maximum pressure at which a crystal structure has ever been directly probed. The results were reported today in Nature.

“We discovered that, surprisingly, under these conditions carbon does not transform to any of the predicted phases but retains the diamond structure up to the highest pressure,” said Amy Jenei, LLNL physicist and lead author on the study. “The same ultra-strong interatomic bonds (requiring high energies to break), which are responsible for the metastable diamond structure of carbon persisting indefinitely at ambient pressure, are also likely impeding its transformation above 1,000 GPa in our experiments.”

The academic component of the collaboration was led by Professor Justin Wark from the University of Oxford, who praised the Lab’s open access policy. “The NIF Discovery Science program is immensely beneficial to the academic community —  it not only allows established faculty the chance to put forward proposals for experiments that would be impossible to do elsewhere, but importantly also gives graduate students, who are the senior scientists of the future, the chance to work on a completely unique facility,” he said.

The team — which also included scientists from the University of Rochester’s Laboratory for Laser Energetics and the University of York — leveraged the unique high power and energy and accurate laser pulse-shaping of LLNL’s National Ignition Facility to compress solid carbon to 2,000 GPa using ramp-shaped laser pulses, simultaneously measuring the crystal structure using an X-ray diffraction platform to capture a nanosecond-duration snapshot of the atomic lattice. These experiments nearly double the record high pressure at which X-ray diffraction has been recorded on any material.

The researchers found that even when subjected to these intense conditions, solid carbon retains its diamond structure far beyond its regime of predicted stability, confirming predictions that the strength of the molecular bonds in diamond persists under enormous pressure, resulting in large energy barriers that hinder conversion to other carbon structures.

“Whether nature has found a way to surmount the high energy barrier to formation of the predicted phases in the interiors of exoplanets is still an open question,” Jenei said. “Further measurements using an alternate compression pathway or starting from an allotrope of carbon with an atomic structure that requires less energy to rearrange will provide further insight.”

About the National Ignition Facility (NIF)

NIF, the world’s highest-energy laser system, is designed to create the extreme conditions — temperatures exceeding 100 million degrees and pressures more than 100 billion times that of the Earth’s atmosphere — similar to those in stars and in detonating nuclear weapons. As the only facility that can create the conditions that are relevant to understanding the operation of modern nuclear weapons, NIF is a crucial element of the National Nuclear Security Administration’s science-based Stockpile Stewardship Program. In addition to helping ensure the reliability of the nuclear deterrent, NIF opens new frontiers in laboratory astrophysics, materials science, hydrodynamics and many other scientific disciplines.