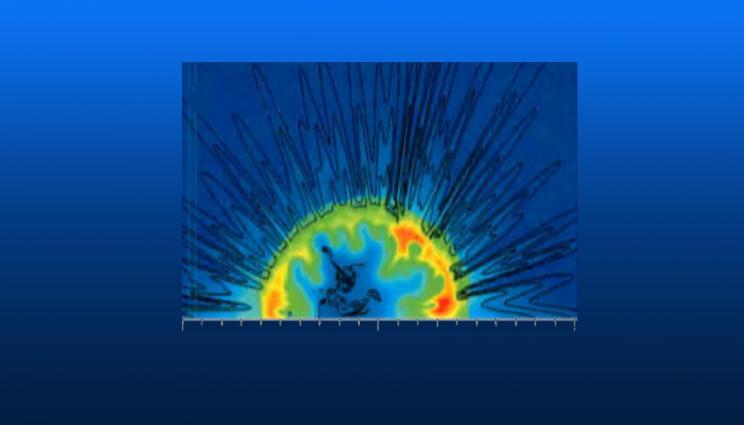 The experimental results have matched computer simulations much better than previous experiments, providing an important benchmark for the models used to predict the behavior of matter under conditions similar to those generated during a nuclear explosion, a primary goal for NIF.

Breanna Bishop, bishop33 [at] llnl.gov, 925-423-9802
Demonstrating the controlled fusing of deuterium and tritium (hydrogen isotopes), such that more energy is produced than is used to create the fusions, is one of the stated goals of the National Ignition Facility (NIF). Two papers published Feb. 5 in Physical Review Letters describe the "high-foot" series of experiments begun last spring, which bring NIF closer to achieving this goal.

In "Design of a High-Foot High-Adiabat ICF Capsule for the National Ignition Facility," Lawrence Livermore National Laboratory researchers report on the design basis for this experimental campaign.

The technique of inertial confinement fusion on NIF consists of capturing and converting laser light into X-rays in a several-millimeter-sized gold cylinder, which are then absorbed by a two-millimeter diameter capsule containing deuterium and tritium (DT) fuel. Absorption of these X- rays causes well-timed shocks to implode the capsule, thereby compressing, heating and confining the DT fuel such that fusion reactions can take place.

"In this experiment, we estimate that the fusion fuel trapped a significant number of helium nuclei (particles resulting from the fusion of deuterium and tritium)," said lead author Thomas Dittrich. "In addition, this implosion gave no indication of shell-fuel mixing and can be well understood by one-dimensional simulations."

Future experiments in this series of high-foot capsule implosions will take incremental steps from this current design in order to improve performance. These steps will include increasing laser energy and power, reducing capsule shell thickness and lowering capsule gas density.

In "High-Adiabat High-Foot Inertial Confinement Fusion Implosion Experiments on the National Ignition Facility," LLNL researchers report on results of this campaign through August 2013.

In this paper, the research team reports on achieving very high performance in DT-layered experiments by controlling the instabilities in the target shell, or ablator, using a specially-designed pulse shape. This design has higher radiation drive temperatures, which may not allow for maximum compression of the fuel but reduces the ablator front instabilities. This idea demonstrated measured mix levels that are very low (0 - 100 billionths of a gram) and resulted in high performing implosions. In addition, these shots showed that a significant portion of neutron yield is from the alpha-particle self-heating -- a necessary condition to achieve the ignition.

"This work showed that by mitigating the mixing of the ablator material, a significant contribution from alpha-particle self-heating was achieved," said lead author Hye-Sook Park. "Our deliberate step-by-step approach is working and more progress has been made since the experiments reported on in this paper. This work is a team effort of design physicists, experimental physicists, laser scientists and facility operations people coming from all areas of LLNL. It is very exciting to work on this monumental project."

"This work represents a significant progress towards achieving ignition, but we still have much more work to do," she added.

The paper was also the subject of an American Physical Society Viewpoint, "Encouraging Signs on the Path to Fusion."