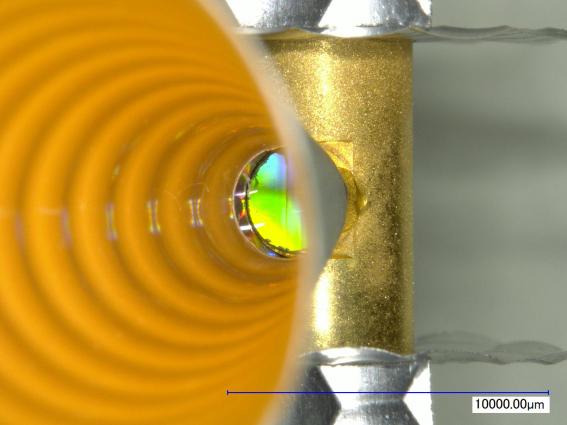 The diamond target sits at the end of a diagnostic cone attached to a gold hohlraum. 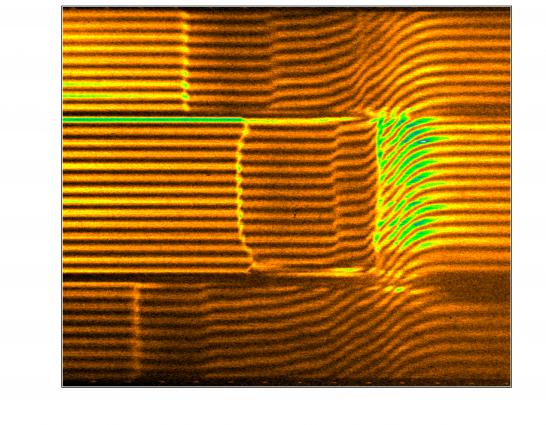 Data gathered by VISAR (Velocity Interferometer System for Any Reflector) provides information for the determination of the equation-of-state (EOS) of carbon, including its many potential structures at extreme pressures.

By replicating the conditions believed to exist in the cores of several recently discovered "super-Earths" - extra-solar planets three to 20 times more massive than Earth -- the experiments could provide clues to the formation and structure of these and other giant planets as well as the exotic behavior of materials at ultrahigh densities.

The team of scientists from UC Berkeley, Princeton University and LLNL used a carefully shaped 20-nanosecond, 750-kilojoule NIF laser pulse with 176 beams to ramp-compress multiple thicknesses of diamond. The properties of compressed diamond were then measured at more than six times the pressure previously achieved in similar experiments by the same team at the University of Rochester's OMEGA laser.

Pressure ramps give a much "softer" compression than that provided by a shock front, so they cause less heating. Use of the time-dependent ramp-wave compression technique is key to keeping the material relatively cool and solid at higher pressures than could be achieved with standard near-instantaneous shock-physics experiments.

The reduced level of heating by ramp compression makes these experiments relevant to the study of planetary interiors. The standard technique for studying material conditions relevant to the inside of planets is through quasi-static compression in a diamond anvil cell. Those platforms, however, are limited to peak pressures of about 3 megabars (Mbar), while planetary core pressures range from about 3.5 Mbar (Earth) to about 8 Mbar (Neptune) to 30 Mbar (extra-solar super-Earths) to 40 Mbar (Saturn) and 70 Mbar (Jupiter).

"The only way to recreate the interior conditions of large planets is through ramp compression -- and currently, as we've just demonstrated, NIF is the highest pressure platform by some way," said Ray Smith, the experiment's principal investigator and scientist in LLNL's Physics Division. "In fact, we believe we can build on these initial experiments and go to even higher pressures."

As many as 30 percent of main sequence stars are estimated to have planetary companions and more than 500 exoplanets have been discovered to date. Determining the interior structure and composition of exoplanets is challenging but is important to understanding the diversity and evolution of planetary systems. Planetary surface conditions are closely coupled to interior processes and both have an important influence on the habitability of planetary environments.

Diamond is especially interesting from an astrophysical standpoint because carbon (which diamond is formed from) is the fourth most abundant element in the universe and is important in planetary science. Ice giant planets such as Neptune and Uranus contain large quantities of methane that decompose at high pressures and temperatures, possibly forming diamond-rich layers in their interiors. A number of extra-solar Neptunes and super-Neptunes already have been discovered, and this class of planet is expected to be quite abundant. In addition, for certain protoplanetary disks with high carbon content -- the chemistry of planetary formation -- may lead to the formation of carbon-rich planets dominated by carbides and diamond.

"Diamond's overall technical and scientific importance and its potential use in laser compression experiments as an ablator or target make this material one of the most important for immediate study," Smith said.