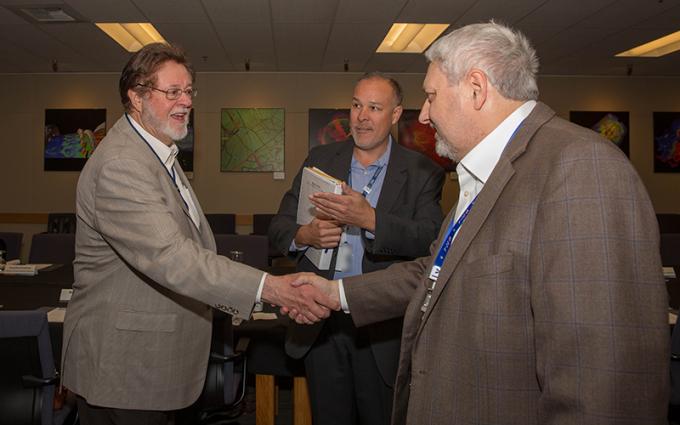 NFL comes to Lab to hear latest on TBI research

San Francisco 49ers chairman John York and NFL Executive Vice President for Health and Safety Jeff Miller joined a group of scientists from DOE and four of its national laboratories and neuroscience experts from the University of California, San Francisco (UCSF) to hear the latest breakthroughs in TBI research, specifically projects combining clinical data with HPC simulation, artificial intellegence (AI) and predictive modeling to better understand how the brain works and responds to trauma.

"We’re always looking to improve the health of our athletes in the game, and part of that is working with industry and governmental experts to advance science wherever possible," Miller said.

The NFL, which has collaborated with the Department of Defense, the National Institutes of Health and the National Institute of Standards and Technology (NIST), has studied concussions and TBI for several years. By undertaking a comprehensive video review of all reported concussions sustained in NFL games over the past three seasons, the league has been able to make data-driven rules changes regarding tackling, kickoffs and punts and how players practice, Miller said. The NFL, in partnership with the NFL Players Association (NFLPA), also has tested helmet performance by simulating concussion-causing impacts in a laboratory and comparing those against likely on-field incidents. The results of the laboratory tests are displayed on a poster shared with NFL players, in addition to club medical, training, coaching and equipment staffs, to help inform their equipment choices. After issuing last year’s poster — which for the first time included prohibited helmets — approximately 50 percent of NFL players upgraded to a better-performing helmet, Miller said.

In addition to producing finite element models of existing helmets exploring materials science advances for padding, next season the NFL will be piloting the use of mouthguards embedded with sensors for players from four NFL teams to measure force, frequency and direction of impacts, Miller said.

Aside from promoting safety for athletes, a greater understanding of TBI could have implications for the military and the DOE mission space, attendees said. DOE’s involvement in TBI research is championed by Secretary Rick Perry, who views TBI as an important national health problem. During the meeting, the parties identified areas of common interest, including the application of AI, machine learning and big data analytics to TBI. By leveraging its expertise in those areas, DOE could extend the frontiers of its supercomputing and tap into the broader neuroscience community, said Dimitri Kusnezov, DOE’s deputy undersecretary for Artificial Intelligence & Technology.

"Whether you’re in the nonproliferation world, or looking at NIF experiments, or subcritical tests, there are lots of data and lots of rich images," Kusnezov said. "We have the ability to sense and measure many different things, and the volumes of data we measure are in the petabytes. With TBI, we are engaged with the subject matter experts, the curated data and the ability to have people explain to us what’s in there -- we get all that for free. We get to work with complex data and complex images and develop tools that allow us to make predictions that we test against what actually happened. Ultimately, we care about doing that in all of our missions. AI is going to be important to just about everything we do." 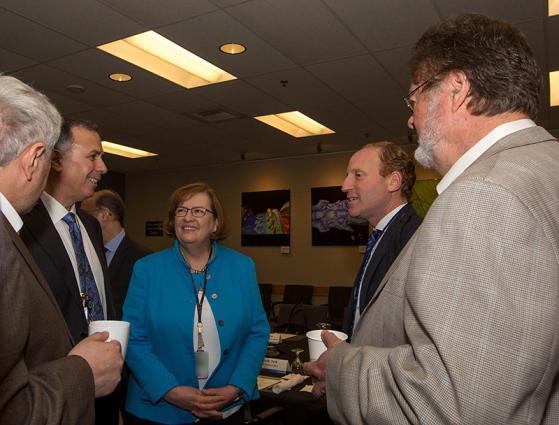 Scientists specializing in TBI and brain research from LLNL, Argonne, Los Alamos and Lawrence Berkeley national labs also attended the meeting, held in April. LLNL Director Bill Goldstein, who began proceedings with an overview of the Laboratory, highlighted a collaboration with Boston University and the Veteran's Administration to model concussions and ongoing work using high-performance computing simulations to accelerate cancer drug discovery through the ATOM project with the National Cancer Institute, UCSF and pharmaceutical company GlaxoSmithKline. LLNL’s history of applying supercomputers to big data and machine learning problems has made it and other national labs ideally suited to help push precision medicine for TBI, Goldstein said, as evidenced by work related to TRACK-TBI, which has led to unprecedentedly large calculations of connectomes (maps of brain activity) from MRI databases.

In 2018, the NFL awarded two grants totaling more than $11 million to the UCSF-led Transforming Research and Clinical Knowledge in Traumatic Brain Injury (TRACK-TBI) initiative, a public-private partnership launched seven years ago with funding from the National Institutes of Health and the National Institute of Neurological Disorders and Stroke (NINDS), which is championing an AI and computing-driven precision medicine approach to TBI.

Dr. Geoff Manley, a neurosurgeon at UCSF and principal investigator for the TRACK-TBI initiative, discussed how the consortium has made tremendous progress since its inception. Researchers have collected a massive amount of clinical data on 3,000 patients who are followed for a year subsequent to their injury. Manley noted that although these study participants are diagnosed with predominantly "mild" TBI, the TRACK-TBI team is finding that "mild TBI is not really mild" when analyzed over extended timescales. TRACK-TBI researchers are engaging in a follow-on project in which the original study participants will be interviewed and re-evaluated for up to seven years after their initial brain injury to examine how their symptoms have progressed over time. The goal of the project, Manley said, is to more accurately characterize the long-term effects of TBI and bring to clinical practice a precision medicine approach to TBI.

Manley said TBI researchers are "at in inflection point," where they are collecting large amounts of complex data but don’t have the computational tools to analyze it. Because TBI is one of the more complicated injuries in the most complex organ in the body, Manley said, researchers will need novel approaches, including machine learning and artificial intelligence -- and a diverse team approach to solve it.

"We have shared interests, not only for the athletes that play football, but also for the millions of people who watch football and who also experience head injuries," Manley said. "The care for the average person that has a traumatic brain injury pales in comparison to what is available to the military and professional athletes. There’s a lot at stake here; this is a major public health issue that we currently have no treatment for."

After Manley’s talk, Shankar Sundaram, director of LLNL’s Bioengineering Center and a lead investigator for the Lab on TRACK-TBI, relayed the results of the latest work his team has done with advanced neural imaging and patient outcomes aimed at helping UCSF clinicians make more refined diagnoses of TBI patients. The work has analyzed novel biomarker signatures of TBI called "white matter track disruptions" that can be captured in an MRI scan, Sundaram said. Through research done in parallel with TRACK-TBI, Sundaram’s group, including Lab computer scientists Timo Bremer and Alan Kaplan, recently computed the largest collection of connectomes ever performed — on 150 patients — and have plans to compute 3,000 more. On the Lab’s newest high-performance computers, Sundaram said researchers have dramatically reduced the time required to complete the several analytic steps required to visualize each connectome from 10 hours to less than an hour, meaning that this advanced diagnostic tool could be made clinically relevant.

"The bottom line is we have to be able to do this at scale," Sundaram said. "I certainly believe this could lay the groundwork potentially for an evidence-based, unbiased metric to assess concussions or TBIs at any hospital in any community."

Kristofer Bouchard, principal investigator for Lawrence Berkeley’s Neural Systems and Engineering Lab, reported on research he and his colleagues have done in combining AI with biomarkers and clinical outcomes to characterize 30 different types of TBI, which eventually will help to predict complex patient outcomes. Jim Brase, LLNL’s deputy associate director for programs in the Computing Directorate, said not only are the DOE national laboratories’ advanced supercomputers and artificial intelligence methods pushing the state-of-the art in TBI research, but the labs’ ability to disseminate and protect sensitive data offers collaborators an existing infrastructure to share massive amounts of clinical medical data.

"The kinds of things we can bring to this, these resources, the supercomputers, the people who actually know how to use them to solve problems coming together with the collection of people we have here today, make this a unique team," Brase said. "If we’re going to have a chance to take on a problem like TBI and make significant headway in how we treat and predict this, this is it."