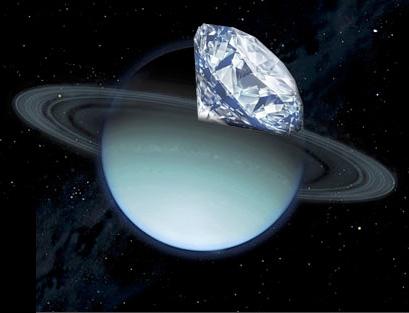 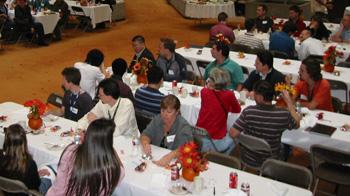 Diamonds are an astrophysicist's best friend

By determining the melting temperature of diamond under extreme pressure and temperatures, scientists may gain new insight into the evolution and structure of giant planets such as Uranus and Neptune.

Large amounts of carbon are at the hearts of giant planets. Diamond is a form of carbon in which the carbon atoms are arranged in a face-centered cubic crystal structure. Diamond has strong covalent bonding between atoms and has the highest hardness and thermal conductivity of any bulk material.

And diamond may dominate the cores of planets like Neptune. The high-pressure, high temperature behavior of carbon is essential to predicting the evolution and structure of such planets. However, the melting temperature of diamond has never been directly measured.

Until now when scientists at the Lawrence Livermore National Laboratory, University of California, Berkeley and the University of Rochester determined the melting temperature of carbon at pressures of 6 million to 11 million atmospheres. The research is published in the Nov. 8 online issue of Nature Physics.

In shock compression experiments using the OMEGA laser at the University of Rochester, the team discovered that diamonds melt to a denser metallic fluid between about 8,000 to 10,000 Kelvin (15,000 to 18,000 degrees Fahrenheit). At still higher pressures between 11 million and 25 million atmospheres, diamond melts to a complex fluid state as the temperatures increase above 50,000 degrees Kelvin (90,000 degrees Fahrenheit).

"These measurements of extreme pressure and temperature reveal some very interesting characteristics of the region of Neptune and Uranus, where carbon starts melting," said Jon Eggert, the lead author on the paper. "From what we've observed, it is likely that most of the atomic carbon has gravitationally settled into a carbon-rich, solid phase near the core of these planets."

Along with melting temperatures, the experiments show that pure carbon could be solid at all depths, although it is possible that a hotter deep interior may exist that is isolated from the outermost atmosphere by a stably stratified, non-convecting region within Uranus and Neptune.

"In such warmer conditions, pure carbon would exist in the liquid metallic state, settling out of the mantle to form a fluid outer core that helps sustain the planetary magnetic field," Eggert said. "In either case, the high sound velocity of a diamond-rich layer at intermediate depths could influence planetary normal modes that may be observable in the future."

Next week, Thanksgiving Day will be celebrated with family and friends, with an abundance of food on the table. But many in the community will not be as fortunate.

HOME at Sunset, one of the agencies on the HOME Campaign list that provides food and counseling to families in need, states that even a small donation of $10 can feed one person for about two or three days with wholesome meats, vegetables, fruit, bread, eggs and milk.

If you haven't made your pledge yet, take a few minutes during Thanksgiving week to remember those in the community who need some basic food items.

During this season of giving, employees can go to the Web page and donate to an agency of their choice. The deadline for online donations is Dec. 4.  Employees can check out the HOME Web page for donation statistics, articles, photos of the Run for HOME and "At HOME in our Community" activities.

Note: Today (Nov. 20) is the last day to add an agency to the existing HOME agency list, which is located on the HOME Web page.

This month, the Lab held its first event to recognize and show appreciation to foreign national employees.

Coordinated by Kathlean Batteate-Jordan, program leader of the Lab's Immigration Services, through the Work-Life Center, 72 of the Laboratory's 154 foreign national employees attended the event. Many of LLNL's foreign nationals come from Canada and Mexico, while others come from as far away as European countries, Argentina and China.

Scientists, engineers and postdocs come to LLNL from foreign countries to fulfill their professional goals.  "They want to be part of the cutting edge science that takes place here," Batteate-Jordan said. "It is important to host such an event to show them that they and their work are valued throughout the Lab."

Batteate-Jordan said one of the goals of the program has been to host an informal event where these employees who are spread throughout the Lab, could gather together informally and have a chance to meet others from similar backgrounds, or even from their own countries.

One of the methods used to host a foreign national employee is through an Exchange Visitor Program, which is carried out under the provisions of U.S. law, to increase mutual understanding between the people of the United States and the people of other countries by educational and cultural exchanges. The program provides an extremely valuable opportunity to experience the United States and its way of life, thereby developing lasting and meaningful relationships.

Comments from the foreign national employees who attended the recent event were favorable.

"I met new people. I now have contacts from my home country," said one employee.

"I felt invisible prior to this event; but, now, I feel very welcomed," said another.

Batteate-Jordan admits that she has a rather unique position at the Lab, as head of the office that manages immigration services for the Strategic Human Resources Department. She's been at LLNL for seven years and states happily: "I love this job. The people I meet through this office are brilliant, worldly and inspiring."

With the first foreign national event a success and now behind her, what's next?  Future plans could include an annual or semi-annual event of a similar nature.  "I want to make them feel comfortable here," Batteate-Jordan said.