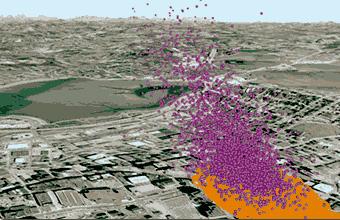 © National Geographic Channel Plume of dirty bomb debris spread across the city of Portland, Maine, after a hypothetical attack, based on data from LLNL’s National Atmospheric Release Advisory Center. 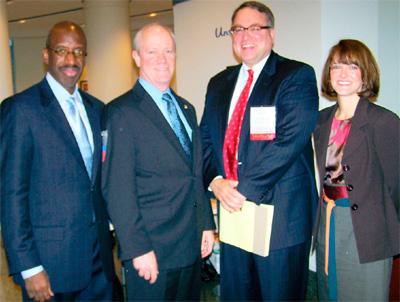 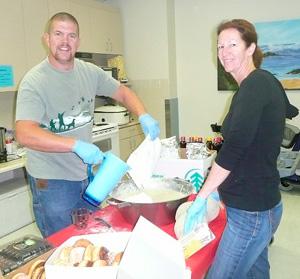 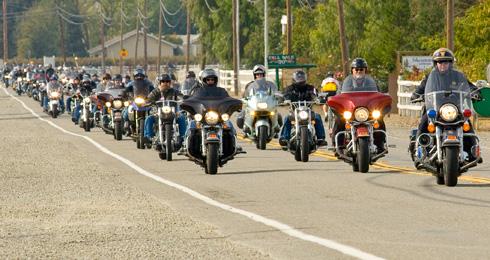 Two Laboratory researchers and the National Center for Atmospheric Release Advisory Center are featured in a one-hour documentary that airs Sunday, Nov. 15, on the National Geographic Channel.

The program, called Dirty Bomb Attack, shows what happens when a U.S. city — Portland, Maine — becomes the target of a hypothetical radiological attack. Part of the network’s Naked Science series, the program will air at 7 a.m. (Pacific Standard Time) on Sunday.

Produced by the Maine-based Lone Wolf Documentary Group, the program starts with a dramatization of a car bomb that detonates on a busy street, dispensing radioactive material, and moves to the question of "what happens next?"

Buddemeier also talked about the steps that could be undertaken to mitigate the consequences of a dirty bomb attack.

Page Stoutland, the director of Strategy for the Lab’s Global Security principal directorate, discussed the use of nuclear forensics to help identify the perpetrators of such a terrorist attack.

During the program, federal authorities contact the Laboratory’s National Atmospheric Release Advisory Center (NARAC) and its Interagency Modeling and Atmospheric Assessment Center (IMAAC) to obtain a model of the radiological plume’s dispersion over Portland, Maine. A team of NARAC/IMAAC atmospheric scientists and other researchers are shown modeling the dispersion of the plume.

Officials also were interviewed from several other agencies, including the FBI, the Centers for Disease Control and Prevention, the Department of Energy, the National Nuclear Security Administration and the Department of Homeland Security.

Have you made your pledge yet? With Thanksgiving Day less than two weeks away and the December holidays just around the corner, now is the time for giving – a time to help those in need in the community, especially during these challenging economic times.  Employees can go to the Web page to donate.

Small donations have an impact No contribution is too small. Even a one-time donation of $10 can make a difference in the lives of local residents represented by one of the many agencies in the HOME Campaign list. For instance:

Judith Odegaard of The McHenry House in Tracy said that $10 could feed the six families who reside at the house either breakfast or lunch. It also could provide school supplies for the children’s homework club or pay for 10 loads of laundry.

Patty Carter of the Home at Sunset (Free Fresh Foods) in Livermore said that $10 is a blessing and could provide enough groceries to feed a family for about three days.

Susan Ruxton of the Tri-Valley Animal Rescue Inc. in Pleasanton said that $10 could feed 12-15 animals for a week or vaccinate an animal to protect it from disease.

(These are but a few examples of the many agencies listed on the HOME Campaign agency list.)

‘Thank you’ from Open Heart Kitchen The recent Labwide canned food drive led by the Global Security Principal Directorate, which is coordinating the HOME Campaign this year, demonstrated the kindness and generosity of Lab employees.

"The generosity of the food drive efforts of the Lab has almost filled our railroad storage unit,"said Linda McKeever, executive director of Open Heart Kitchen, in a recent e-mail, thanking Lab employees.

"The food and gift cards will allow us to work with the local food pantries in the area and fill the much-needed food bags for more than 5,000 households this Thanksgiving holiday. They also will serve as our food supply base to create more than 450 hot meals each weekday for the next four months. The request for Open Heart Kitchens children’s box lunches has almost doubled this year, and many of the donations from the Lab employees have included items that can help meet the demand in our box lunch program.

"Your amazing efforts will help provide the base to prepare and serve more than 15,000 hot meals and several hundred box lunches to those most in need. Without your help we would not be able to provide this safety net against hunger for our neighbors in need."

Employees can check out the HOME Web page for donation statistics, articles, photos of the Run for HOME and "At HOME in our Community" activities.

Check Newsline and NewsOnLine for continued coverage of the HOME Campaign. The deadline for online donations is Dec. 4.

For the first time, the Laboratory hosted the Department of Energy Contractor Attorneys’ Association (DOECAA) annual fall conference.  The two-day meeting was held Oct. 22–23 at the University of California’s Washington, D.C. Center.

The conference was attended by 80 DOE and contractor attorneys, senior officials from the DOE complex and many attorneys from law firms that practice in the energy and national security arena.

"It was a great privilege to be associated with this event," said Paul Ehlenbach, Laboratory counsel. "With the assistance of Government Relations, the Bechtel Law Department, the UC Washington, D.C. center staff and great administrative support from back home, we were able to sponsor a memorable conference that many attendees told us was among the best DOECAA conferences they had ever attended."

More than 45 Lab volunteers woke up early on Wednesday morning to help prepare and serve a hearty Veterans Day breakfast for the 100 patients residing at the Livermore Veterans Hospital.

Volunteers scrambled 26 dozen eggs, cooked 40 pounds of sausage and 500 pancakes and waffles, cut up 30 pounds of fruit and poured eight gallons of juice.

The LLLAFVA (Lawrence Livermore Lab Armed Forces Veterans Association) hosted the breakfast, which has become an annual event at the hospital.

More than 80 Lab motorcycle riders took to the streets Wednesday in honor of Veterans Day.

Employees staged at Outer Loop Road, exited the East Gate and rode to Site 300. Riders were treated to a barbecue lunch at Site 300, courtesy of the Alameda County Firefighters Association.

The ride is organized by the Alameda County Firefighters Association and the LLLAFVA.