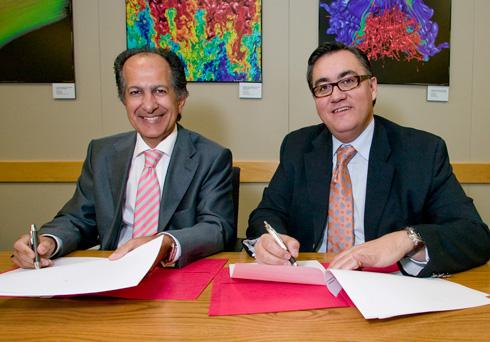 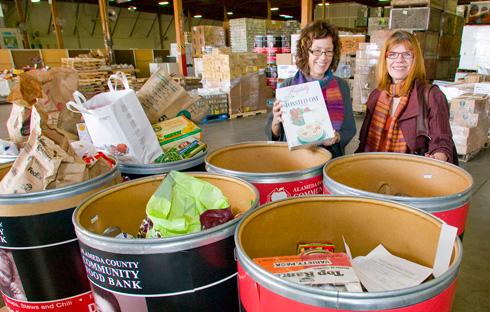 Jacqueline McBride/NEWSLINE (At left) Barbara Darrow-Blake and Beth Sawi of the Alameda County Community Food Bank stand near barrels of food items collected and ready to be distributed to people in need.

The overall thrust is to create a collaboration that integrates the policy and law expertise at Georgetown with LLNL's science and technology expertise.  Georgetown will provide S&T-informed policy advice and research; and increase recognition of LLNL within senior decision making circles as a laboratory that understands the importance of policy and law in the development and use of science and technology to address national security challenges.

"I’m very pleased to be launching this collaboration that merges Georgetown’s strength in policy, law and international affairs with Livermore’s science and technology, especially in cyber security," Díaz de la Rubia said. "I look forward to our future successes."

Georgetown University fits the model of an institution with depth in social science, public policy, political science, law and the humanities. Its presence in Washington, D.C., its campuses in Europe and the Middle East, and its extensive network of alumni in government and distinguished scholars place it in a unique position to stimulate the type of thinking that can positively influence U.S. government policy.

For the Laboratory, the collaboration with Georgetown will provide real-time interpretation of the national or international regulatory and public policy context so that Lawrence Livermore programs are better targeted; and also provide solutions to policy "pieces" that, when integrated with Lawrence Livermore’s science pieces, create comprehensive or more complete programs that address important national or global problems.

Quashing the conventional view of bonding

LLNL theoretical physicists Per Söderlind and Alex Landa have, together with colleagues from the Royal Institute of Technology, Sweden, discovered features of the transition metals that contradict the conventional explanations for phase stability.

For decades, the high-symmetry cubic and hexagonal phases of the transition metals have been assumed to be a result of d-electron bonding, which rules out lower symmetry atomic arrangements such as tetragonal or orthorhombic structures.

But Söderlind and Landa have now proved that this assumption is erroneous. Their study began five years ago when they predicted that the 3d metal, vanadium, becomes mechanically unstable in its cubic phase during compression because of the intraband nesting of the Fermi surface.

This discovery led to experiments to find several phonon-dispersion anomalies and possible phase transitions induced by pressure. A rhombohedral phase was later discovered in diamond-anvil-cell measurements.

Söderlind and Landa explain more generally that band-energy effects combined with electrostatic (Madelung) interactions can lead to a stabilization or destabilization of the body-centered-cubic group VB elements, depending on pressure and/or alloying with neighboring metals. This work also has important implications for strength in metals of interest for the Laboratory such as vanadium and tantalum.

Their article, entitled "Stability in bcc transition metals: Madelung and band-energy effects due to alloying," is scheduled to appear in today’s (Dec. 4) edition of Physical Review Letters .

LLNL rad detection to be featured on Channel 7

Two LLNL radiation detection technologies will be featured in a news story slated to air this Sunday (Dec. 6) night on a Bay Area television station.

The news story, which will focus on the Adaptable Radiation Area Monitor (ARAM) and GeMini, is scheduled to be broadcast on Channel 7 (KGO-TV, San Francisco) during the station’s 11 p.m. newscast.

The ARAM technology has been licensed to – and developed into a counterterrorism tool – by Textron Defense Systems Corp., a firm headquartered in Wilmington, Mass.

Developed by a team of LLNL scientists and engineers, GeMini is a portable gamma-ray spectrometer based on germanium technology. GeMini was launched on NASA’s Mercury MESSENGER spacecraft and has been taking the first-ever gamma-ray data of the planet Mercury. GeMini also can be used to help prevent smuggling of nuclear materials.

Last day to bring it HOME

Today is the final day for employees to make a donation to the 2009 Helping Others More Effectively (HOME) Campaign.

Employees can go to the Web page to donate to the agency of their choice.

Banking on feeding the hungry

The Alameda County Community Food Bank , located near the Oakland Airport, is one of the many non-profit agencies listed in the Lab’s HOME Campaign.  In business since 1985, this is one organization whose vision is to go out of business.

Over the years, Lab employees have donated generously through the HOME Campaign to assist the work of the Alameda County Community Food Bank.

The Alameda County Community Food Bank was recently featured on CBS News Sunday Morning in a segment entitled, "Fighting Hunger in a Land of Plenty."