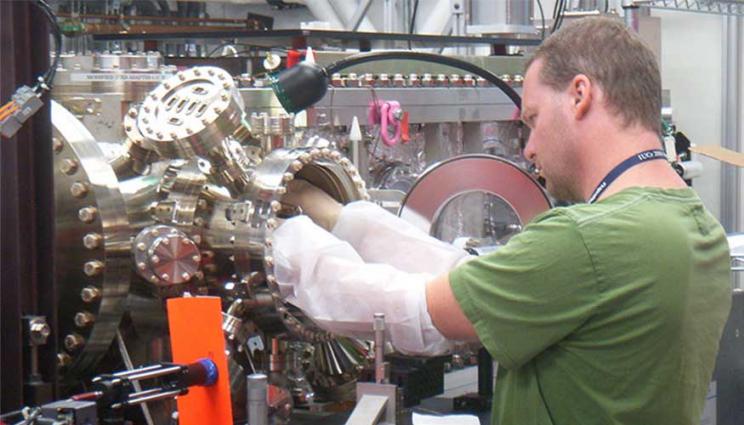 Stephen Wampler, wampler1 [at] llnl.gov, 925-423-3107
An international team of researchers has demonstrated a new method for studying the structure of proteins that could lead to important advances in biology and other fields.

For the first time, protein crystals have been studied in two dimensions at room temperature with X-rays, using a new technique that could open the door for scientists to learn more about an important class of proteins that constitute about one-third of all human proteins. The scientists report their findings about this X-ray diffraction method in the March edition of the International Union of Crystallography Journal.

Frank co-led a team of two dozen scientists with crystallographer James Evans of Pacific Northwest National Laboratory (PNNL) that used the Linac Coherent Light Source (LCLS) at the SLAC National Accelerator Laboratory in Menlo Park, Calif. The SLAC machine, an X-ray Free Electron Laser (XFEL), is one of two such machines in the world -- along with Japan's SACLA -- that can produce hard X-rays.

Using the predominant method for analyzing protein structures, synchrotron light sources, researchers who take snapshots of proteins must work in three dimensions and need a billion copies of the same protein all stacked up on each other to get a better image of what the protein looks like.

Now with the LCLS XFEL machine, scientists can use exceptionally bright and fast X-rays to take a picture that rivals current methods, with a sheet of proteins only one layer thick.

The membrane proteins that can now be studied more easily using the LCLS machine are often embedded in the boundaries of cells and perform a number of vital cell functions, including nutrient uptake, transport and signaling.

They are important not only because they represent about one-third of all human proteins, but also because they constitute about two-thirds of all current pharmaceutical drug targets for fighting diseases and other human-related health issues.

"The structures of the proteins tell us about their function, which is why it's important to better understand their structure," according to Frank.

"We believe that ultimately the two-dimensional X-ray crystallography performed at room temperature may someday allow us to observe molecules in action, or to make what some call 'molecular movies.' This would permit us to better understand the proteins' functions and how to control them by drugs," he continued.

In 2012, scientists showed they could use an XFEL on a crystal of proteins 10 to 20 sheets thick. Frank, Evans and their team aimed at reducing the number of layers further.

The team developed a way to create one-sheet-thick layers of two different proteins -- a soluble protein called streptravidin that is a commonly used molecule in biology for binding substances and bacteriorhdopsin, a membrane protein isolated from bacteria living in salt ponds. The structures of both proteins are well understood, so the proteins served as model systems.

The team measured the resolution of the two proteins at 8.5 angstroms (a size that would fit in the period at the end of a sentence more than 500,000 times). In subsequent experiments, they have already obtained better resolutions and eventually, the scientists would like to reach a resolution of 2 angstroms, a level at which individual atoms can be distinguished.

In addition to Frank, other members of the LLNL multidisciplinary team that assisted in conducting the three-day May 2012 experiments were postdoctoral researcher and physical chemist Mark Hunter, chemist W. Henry Benner, physicist Stefan Hau-Riege, postdoctoral researchers and physicists Tommaso Pardini and Alexander Graf (who has since left LLNL), and biologists Brent Segelke and Matthew Coleman.

Among the institutions that participated in the research besides LLNL and PNNL were the University of California, Davis, Arizona State University, the Centre for Free Electron Laser Science based in Hamburg, Germany; the Paul Scherrer Institute in Villigen, Switzerland; and the LCLS at the SLAC National Accelerator Laboratory.

Since 2005, LLNL has conducted proof-of-principle experiments for using X-ray free electron lasers for biological imaging and structural biology. Those experiments were led initially by former LLNL physicist Henry Chapman, who is now a director at the Centre for Free Electron Laser Science in Hamburg.

The paper is published on the Web in the I nternational Union of Crystallography Journal.