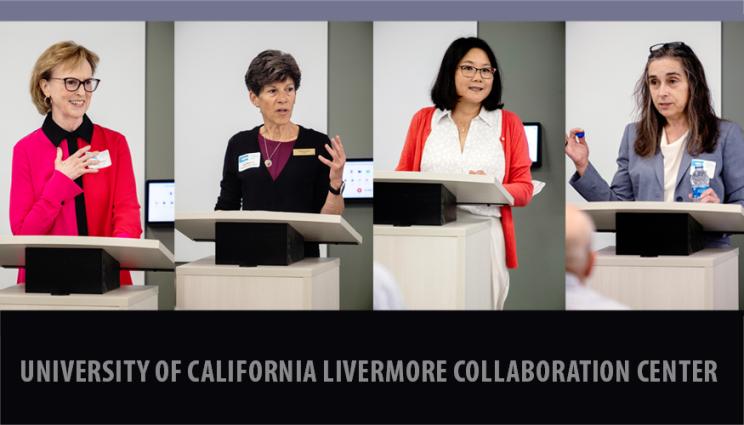 The three-building Hertz Hall complex on the east side of Lawrence Livermore National Laboratory (LLNL) has a new look and a new name.

“The UCLCC will be pivotal in our system-wide UC plan to expand and create new collaborative research, education, workforce development and community outreach programs to meet current and future needs and to strategically leverage the entire UC system,” said UC Regent Jay Sures, the president of the Lawrence Livermore National Security (LLNS) Board of Governors.

UC President Michael Drake stated that he is proud of the “long and fruitful relationship” between UC and the federal government in managing and operating the national laboratories.

“The operation of the UC Livermore Collaboration Center embodies the university’s core mission of public service, research excellence and integrity and commitment to education. Modernizing these facilities at the Livermore Lab will contribute to the future health and scientific vitality of these national resources,” Drake said. (Leasure read the remarks of Drake and Sures to the ceremony’s audience over Zoom).

In his presentation, Leasure told the group that the vision for developing the UCLCC — located on the east side of the Laboratory across from the Discovery Center — started when Budil was the UC vice-president for national laboratories.

Budil arrived at the Laboratory some 35 years ago, in September 1987, to work here and to attend the University of California, Davis Department of Applied Science (DAS), which was located at Hertz Hall.

DAS was established in 1963 at the urging of Lab co-founder and former LLNL Director Edward Teller, who wanted to see a university-level educational facility at the Livermore site.

DAS, or “Teller Tech,” as the program became known, provided unique on-site educational opportunities and awarded nearly 400 Ph.D.s, including one to Budil, with about 50 percent of its graduates taking their first job at the Laboratory.

“That connection to UC Davis not only gave me a world-class UC education, but it allowed me to do research here in facilities that graduate students from academic environments would have absolutely been thrilled to have gained access. It was amazing,” Budil said. But by 2011, DAS closed and the east side buildings saw fewer and fewer uses.

While the relationship between LLNL and UC didn’t disappear, it changed in ways and in Budil’s view, a number of excellent opportunities for partnerships didn’t come to fruition.

“I joined the University of California Office of the President in 2014 with the goal of rebuilding that connective tissue between UC and LLNL. This is our progenitor organization. We have felt great pride being part of the UC system for so many years and we feel those academic roots even at a distance today,” Budil said.

Both Budil and Leasure lauded the work of June Yu, associate vice president for the UC national laboratories, for bringing the UCLCC from the drawing boards to reality.

When Budil and Yu started, the UCLCC seemed like “the impossible dream” and in the early days the duo had to receive special permission from the Department of Energy’s Livermore Field Office (LFO) to enter the facility because it was in such bad shape, Budil recalls.

“I will tell you that this center would not have happened without the amount of time, effort and dedication that June has spent carrying this project on her back to the finish line,” Leasure said. “So, I want to thank June for all of her work.”

“We as a city are very, very proud to have the Laboratory within our city boundaries and we truly value the many partnerships we currently have with you and will have in the future.”

Other speakers — Dona Crawford, chair of the Livermore Lab Foundation Board of Directors; Pete Rodrik, acting associate administrator for partnerships and acquisition for NNSA; and Janis Parenti, interim manager for LFO — all noted the role the UCLCC can play for partnerships.

The design-build team for the UCLCC project included Oakland-based Dialog for design, with Hayward-based Rodane Builders as the general contractor for the $6.5 million effort. The construction, funded by UC, started in September 2021 and was completed in May.

The three buildings in the UCLCC complex will retain their names as the Edward Teller Education Center (Trailer 6675), the Union building (Bldg. 667) and Hertz Hall (Bldg. 661). The buildings are owned by UC, with a 20-year ground lease from NNSA.

The UCLCC buildings include eight general offices, a general lab, a small conference room, two large classrooms, three medium classrooms and two small classrooms. However, the arrangements for the facilities are very flexible and can easily be reconfigured for various uses.

The UCLCC will be open for tours and visits during the Laboratory’s 70th anniversary Employee Engagement celebration on Oct. 11.