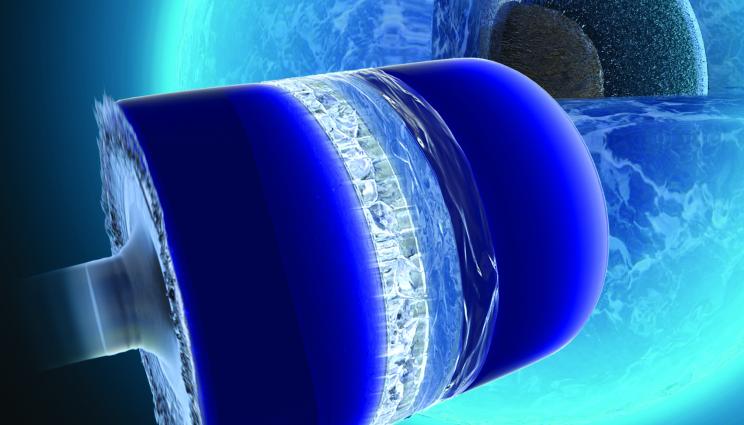 Compression experiments allow liquid water to be driven to an extremely undercooled state and nucleate a high-pressure polymorph known as ice VII. Theoretical work at LLNL has revealed the detailed of the nucleation and growth kinetics of this solidification process. This unique phase of ice is believed to exist near the core of "ocean world” planets, recently detected by observation.

A team of theorists from Lawrence Livermore National Laboratory (LLNL) has solved a long-standing puzzle in the nucleation of a high-pressure phase of ice known as ice VII, which is believed to exist near the core of "ocean world" planets recently detected outside of the solar system, and has recently been discovered to exist within the Earth’s mantle. The findings are described in a paper published today by Physical Review Letters.

Water has been found to freeze into ice VII in laboratory experiments that use shock or ramp waves to compress liquid water to pressures exceeding 100,000 times that found at ambient conditions. However, experiments conducted by different research groups have presented contradictory modes of nucleation. In one case, ice nucleates heterogeneously (forms on a nearby material surface) but in other studies ice was found to nucleate homogeneous (within the bulk of the water sample) and with a much faster rate of crystallization, with the entire sample frozen in an astoundingly short timescale of 10 nanoseconds.

"The conditions created by shock compression are unusual in that they produce an enormous driving force for the system to nucleate -- there are unique considerations that need to be taken into account for solidification at high pressure," said Philip Myint, a staff member in the Physics Division at LLNL and lead author of the research, which is also featured as an "Editor's Suggestion" in the journal. "The liquid is driven away from equilibrium so quickly that it takes additional time for clusters to appear, a process known as transient nucleation."

Myint and co-authors found that this transient nucleation mechanism has a profound effect on the timescale for crystallization, an insight that alters how high-pressure experiments might be conducted in the future.

Nucleation of a crystal begins with the formation of a cluster of atoms, creating an interface that is neither liquid nor solid. In freezing water at ambient pressure, there is a layer of heat running ahead of the liquid-solid interface. The new theoretical work on ice VII kinetics paints a completely different picture, with virtually no layer of heat ahead of the interface. 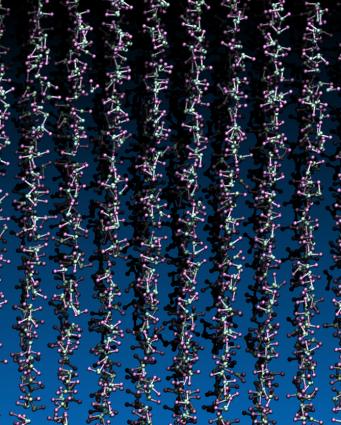 "This extreme temperature disequilibrium between the liquid and growing ice VII crystal comes from the extremely high undercooling driving the liquid to freeze. As a result,  there is no need for the slow process of latent heat removal and the interface velocity is controlled only by very fast molecular ordering at the interface," said co-author Alex Chernov, an LLNL physicist and an authority in the field of crystal growth. "Furthermore, the nucleation process in this system is extremely special as compared to what is generally known about solidification, with a single critical nucleus containing less than 100 water molecules. This is a regime where the limits of our physical understanding are being tested."

The theoretical model developed by the team (which builds on their earlier work, published here and here), which explains more than a dozen high-pressure freezing experiments, also can shed light on areas of application where very high rates of nucleation are desirable, such as in material synthesis and memory storage technology.

"The understanding and control of cross-scale dynamic correlations that appear in matter taken far from equilibrium is perhaps the most important research frontier and unknown today, and progress in this field will be key to the race for technologies of the 21st century," said co-author Babak Sadigh, an LLNL physicist and expert on non-equilibrium phenomena. "By dissecting the thermodynamics and kinetics of interfaces, there are entirely new classes of problems that can be studied and, ultimately, controlled. A holy grail is to design self-regulating dynamic systems and machines that can utilize far-from-equilibrium dissipative dynamics to perform complex tasks, as in biological systems -- control of nucleation is a step on this path."

According to the team, the fundamental breakthrough was possible only after rejecting the empirical approaches that had been embraced by the broader shock physics community until recently.

"For more than a decade, the shock compression community has been at a loss to understand what’s happening in the compressive freezing of water and its observed kinetics. I think that a physics-based theory for how ice VII solidifies is finally here, at least for the homogeneous nucleation case," said Jon Belof, project leader for kinetics research in physics and engineering model development under LLNL’s Advanced Simulation and Computing program and corresponding author of the paper.

Future theoretical work will focus on better understanding the scenario of heterogeneous nucleation, which the team found plays a more prominent role at lower pressures. "That is the real challenge," Belof said. "Nucleation is a rare event and, in principle, it only takes only a single heterogeneous site to start that going."