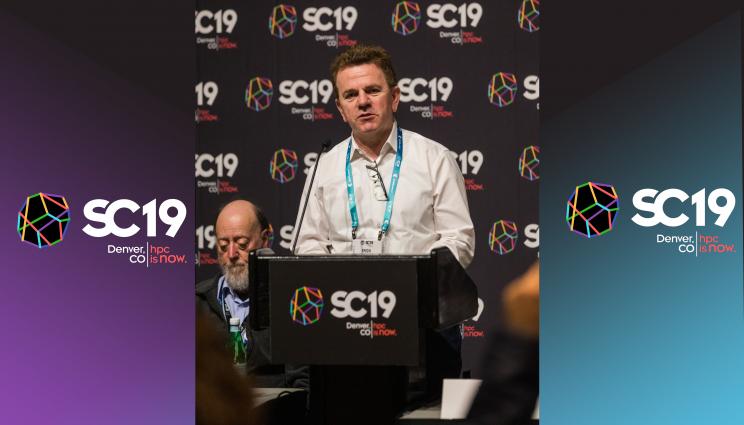 Erich Strohmaier of the TOP500 and Lawrence Berkeley National Laboratory announces the TOP500 List of the world’s most powerful supercomputers at the 2019 International Supercomputing Conference for High Performance Computing, Networking, Storage and Analysis (SC19) in Denver on Nov. 18. Credit: SC19 Conference

The latest TOP500 List of the world's most powerful computers was released today at the 2019 International Supercomputing Conference for High Performance Computing, Networking, Storage and Analysis (SC19) in Denver. Lawrence Livermore National Laboratory’s (LLNL's) IBM/NVIDIA Sierra supercomputer held steady at the No. 2 spot, one of seven Lab systems to crack the top 100, including a brand-new arrival.

The top 10 remained unchanged since the last list was published in June. Oak Ridge National Laboratory maintained its grip on the No. 1 spot with the IBM/NVIDIA system Summit, clocking in at 148.6 petaflops of maximum sustained performance. LLNL's Sierra remained in second place at 94.6 petaflops, followed closely by China's Sunway TiahuLight system at 93.0 petaflops. Sierra's unclassified companion system Lassen, which utilizes the same IBM Power9/NVIDIA V100 GPU architecture as Sierra, stayed in the 10th spot at 18.2 petaflops. One other Department of Energy supercomputer made the top 10 — Trinity, a Cray system operated by Los Alamos National Laboratory and Sandia National Laboratories, which ranked No. 7 at 20.2 petaflops.

In all, nine LLNL high performance computing systems made the list. LLNL’s venerable IBM Blue Gene/Q Sequoia, which is scheduled to be retired in early 2020, came in at No.12 (17.17 petaflops) followed by Vulcan at No. 49 (4.29 petaflops). A newcomer to the list, the just-announced Magma computing cluster from Penguin and Intel, ranked 69th at 3.24 petaflops. Magma is one of the first deployments of Intel’s Xeon “Cascade Lake” Platinum 9200 series processors. When operational, Magma will serve the National Nuclear Security Administration’s Advanced Simulation & Computing program. Filling out the Top 100 were other Penguin clusters Jade (2.63 petaflops) and Quartz (2.63 petaflops) at No. 96 and No. 97 respectively.

The TOP500 List is released twice a year and utilizes the High Performance Linpack (HPL) Benchmark, a dense system of linear equations, as a yardstick of computing performance. The aggregate performance of the 500 systems on the latest list continues to rise and is now at 1.65 exaflops, according to the TOP500.

Additionally, Sierra took the 10th slot on the Green500 List of the world’s most energy-efficient supercomputers. The new Penguin/Intel cluster Magma placed at No. 67. ORNL’s Summit was fifth.

Visit the web for the full list of the world’s most powerful supercomputers and the Green500.

Penguin Computing to deliver Magma Supercomputer, one of the First Intel Xeon P…