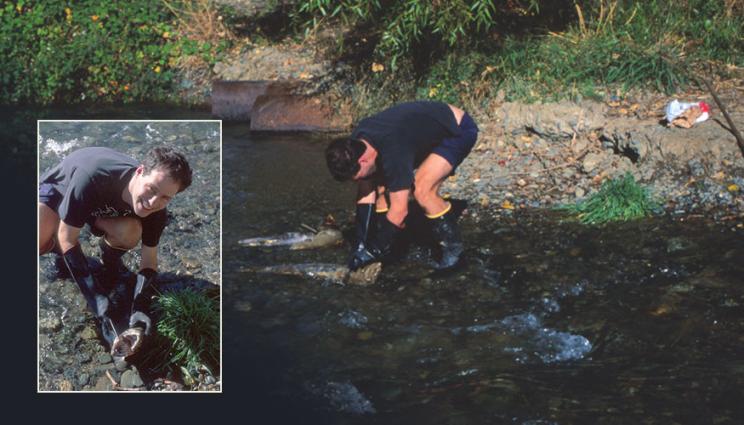 The most treacherous journey of any salmon’s life is from its natal river to the ocean when it is still a juvenile, usually when they are only a few months old. For endangered salmon, this early journey is a matter of life and death for the whole population.

In a new study from the Metropolitan Water District (MWD), University of California, Davis, the NOAA Fisheries Service and Lawrence Livermore National Laboratory (LLNL), researchers trace this journey in the bones of endangered adult Chinook salmon that return from the ocean to spawn and renew the cycle. The surprising finding was that in their youth, on average, half of these successful adult salmon had wandered beyond their natal reach of the Sacramento River to feed and grow before making their way to the ocean. Many of these salmon used unexpected rivers along the way.

The research appears in the journal, Biological Conservation.

"To date, most actions to conserve winter-run Chinook have focused on restoring and protecting habitats within the mainstem Sacramento River," said Corey Phillis, a scientist with MWD and lead author of the new study. "But our work shows that winter runs use a diversity of habitats not previously appreciated and presents new conservation opportunities."

The endangered species in this study is California’s Sacramento River winter-run Chinook salmon. According to the National Oceanic and Atmospheric Administration (NOAA), the winter run is particularly important among California’s salmon runs because the fish exhibit a life-history strategy found nowhere else on the West Coast. These Chinook salmon are unique in that they spawn during the summer months when air temperatures are their warmest.

Many state and federal agencies are charged with working to restore and protect critical habitat for the survival of this unique part of California’s natural heritage. "This helps inform our efforts by giving us a clearer picture of the areas these fish are using throughout their migration," said Rachel Johnson, a research fisheries biologist at NOAA Fisheries’ Southwest Fisheries Science Center and co-author of the report. "The tools we developed offer new insights into the lives of these fish that may be an important link to their survival strategies."

The researchers took advantage of California’s diverse geology to find a tracer for the salmon migration to the sea. They used natural differences in strontium isotopes released from weathering rocks to develop a map of river strontium-87 signatures called an "isoscape." The researchers used the abundance of strontium-87 in the bones of the salmon as a tracer to track where the salmon went as juveniles as they migrated to the ocean.

"What rounds out this story is that fish have a special set of ear bones -- called otoliths -- that grow like pearls. When the fish are young, they lay down a distinct layer every day. With modern technology, we can cut open the ear bone and read the strontium history of each fish," said Peter Weber, LLNL geochemist and senior author on the study. "That strontium history is the key to deciphering their journey to the sea. We can link specific strontium-87 abundances to specific rivers in the California Central Valley. It’s a lovely use of California’s geologic past to protect present biology."

The team used laser ablation mass spectrometry to measure the abundance of strontium-87 in two- to three-week increments from the salmon ear bones. "The laser allows us to remove a tiny sample smaller than a hair’s width from the otolith rings," said Anna Sturrock, fish ecologist at the UC Davis Center for Watershed Sciences. "This tiny sample is then heated to temperatures hotter than the sun to break it down into individual ions, which are separated and counted."

By comparing the ear bone strontium-87 abundances with the Central Valley strontium-87 isoscape – effectively a chemical map - the team re-traced the juvenile outmigration of hundreds of California’s endangered Chinook salmon to the rivers they visited in their youth when they were making their treacherous journey to the ocean.

The researchers knew that the winter-run salmon were using unexpected rivers when they saw the distinct strontium signature of the American River in the ear bones of many of these salmon. The American River watershed includes ancient volcanic rocks rich in strontium-87. "The conclusion was unmistakable because the American River’s high strontium-87 abundance is so distinctive," Weber said. "We knew those fish couldn’t have been in any other river in the Central Valley."

In total, the researchers found evidence that the winter-run juvenile salmon were using some combination of Battle, Deer, Mill and Antelope creeks in the northern Central Valley, as well as the Feather and American rivers further south, and the Delta at the confluence of the Sacramento and San Joaquin rivers. Anecdotal evidence of winter-run juveniles using non-natal streams has been documented, but biologists did not know the importance of these areas. "We had observed winter-run sized fish in these rivers and creeks and now have reason to think that this may be an essential stop-off for this endangered fish," said Jim Smith, a U.S. Fish and Wildlife Service expert on winter run in the Red Bluff office.

Ultimately, the researchers say that their work provides new information about the species’ life cycle that could help conserve these endangered fish.

Weber said: "Perhaps a little unpredictability is part of survival."