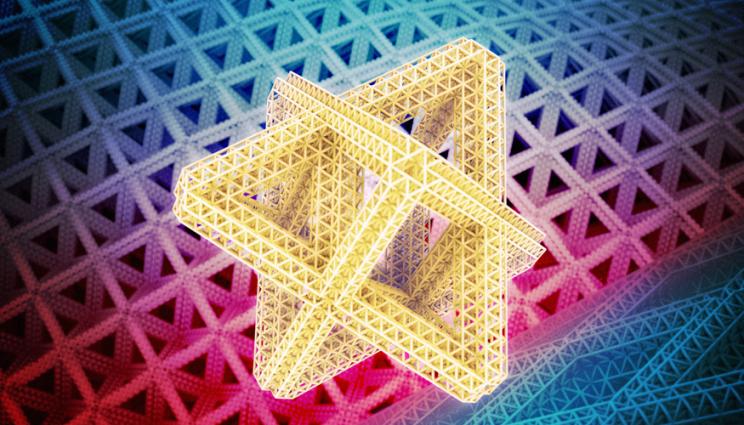 A 3D rendering of a network of hierarchical fractal-like metamaterials. In the latest issue of Nature Materials, LLNL researchers report 3D printing fractal-like lattices with features ranging from the nanometer to centimeter scale to build a nickel-plated metamaterial with a high elasticity not found in any previously built metal foams or lattices. Image by Ryan Chen/LLNL.

In a study published online July 18 in Nature Materials, LLNL engineers report building multiple layers of fractal-like lattices with features ranging from the nanometer to centimeter scale, resulting in a nickel-plated metamaterial with a high elasticity not found in any previously built metal foams or lattices.

"With these 3D features we’ve been fabricating on a nanoscale, you can get some really interesting properties, but people have never been able to scale them up and see how they behave," said lead author Xiaoyu "Rayne" Zheng, a former LLNL technical staff member who led the study and recently transferred to academia as a professor of mechanical engineering at Virginia Tech. "We’ve figured out a strategy of hierarchically building them to take advantage of the nanoscale features but use them at a large scale. It turned out better than we could have imagined." 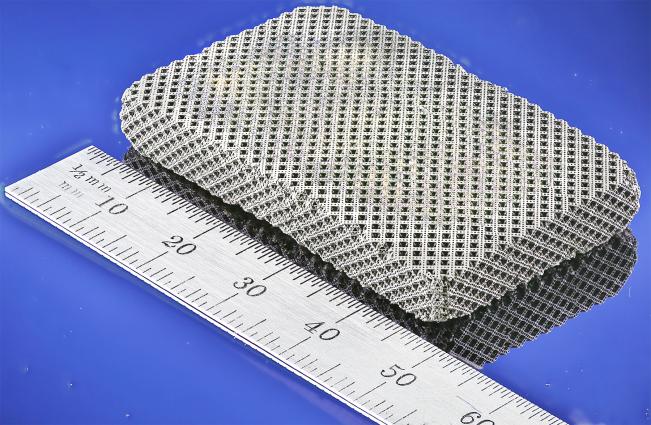 The lattices were initially printed out of polymer, using a one-of-a-kind Large Area Projection Micro-Stereolithography (LAPuSL) printer invented by LLNL engineer Bryan Moran, who won an R&D 100 award for the design. The lattice structure was then coated with a nickel-phosphorus alloy and put through post-processing to remove the polymer core, leaving extremely lightweight, hollow tube structures.

Taking inspiration from the hierarchical structure of materials found in nature, such as wood and bone, the finished material incorporates multiple levels of feature size, from nanoscale films to the macroscale unit cells and lattices, within a single piece roughly five centimeters long. While testing the nickel-plated material, researchers found that structures fashioned with walls 700 nanometers thick broke under a 5 percent strain, while those with 60-nanometer walls stretched about 20 percent before failing.

Besides flexibility, researchers said the concept could overcome the current limitations of 3D-printed micro and nano-architectures by addressing the usual tradeoff between high resolution and build size and extend to a variety of large-scale applications, including aircraft parts, batteries or stretchable armor for the military.

"We’re seeing some of the benefits you only get from the nanoscale at the macroscale," said Chris Spadaccini, director of the Lab’s Center for Engineered Materials and Manufacturing. "Using the structural concept of unit cells and lattices, combined with nanoscale features, you can achieve high strength at a very light weight, as well as a ductile-like behavior in materials that are normally brittle." 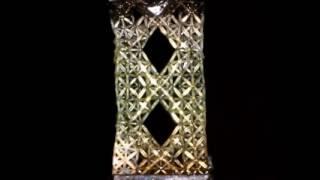 Now that they’ve proven the concept works, the researchers said they could begin to scale up further to tens of centimeters and beyond, explore photonic and electronic properties, as well as incorporating other materials, including ceramics.