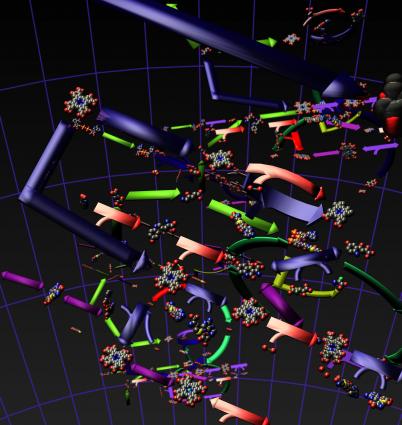 Simulating biological networks in the presence or absence of specific metabolites, such as molecular oxygen, provides new insights into the evolution of life&rsquo;s chemical capabilities. This image of one such simulation was created by LLNL postdoctoral researcher Jason Raymond. 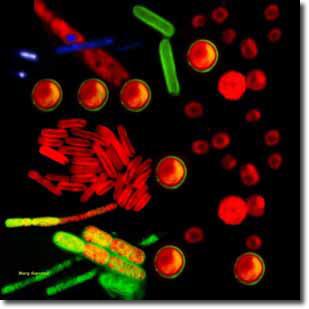 Fluorescence micrographs of cyanobacteria. About 2 billions years ago, cyanobacteria – oxygen-producing photosynthetic prokaryotes that used to be called blue-green algae – were responsible for launching the process that increased the concentration of atmospheric oxygen from less than 1 percent to about 20 percent today, making possible the evolution of humans and other animals. 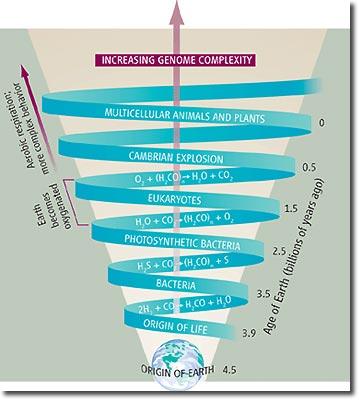 The evolution of genomic complexity and metabolic pathways during Earth's history. The earliest origin of life is not known. However, assuming a single last universal common ancestor evolved in mid-Proterozoic, there is evidence of microbial life. When oxygenic photosynthesis evolved is not clear, but geochemical data suggest that between about 2.3 and 2.2.billion years ago, there was sufficient oxygen in the atmosphere to permit an ozone layer to form. That singular event appears to have precipitated a massive increase in genome and metabolic complexity, culminating in the rise of metazoans around 600 million years ago, and the rise of terrestrial plants around 430 million years ago. The feedbacks in the evolutionary trajectory have led to increasing genomic and metabolic complexity. (Image and caption courtesy of Science .)

LIVERMORE, Calif. — It’s common knowledge that humans and other animals couldn’t survive without oxygen. But scientists are now learning a good deal more about the extent of our evolutionary debt to a substance that was once a deadly poison.

New research at Lawrence Livermore National Laboratory (LLNL) and Boston University shows that many of the complex biochemical networks that humans and other advanced organisms depend on for their existence could not have evolved without oxygen.

“You could call it the ‘oxygen imperative,’ ” said LLNL postdoctoral researcher Jason Raymond. “It’s clear that you need molecular oxygen to evolve complex life as we know it.”

“Researchers have spent decades putting together maps of how the building blocks of life connect to each other,” added Daniel Segrè of Boston University, who holds a joint appointment in LLNL’s Biosciences Directorate. “It turns out that whole regions in this map may not have existed without oxygen.”

Raymond and Segrè used computer simulations to study the effect of oxygen on metabolic networks – the biochemical systems that enable organisms to convert food and nutrients into life-sustaining energy. Their analysis shows that the largest and most complex networks – those found in humans and other advanced organisms – require the presence of molecular oxygen. The research is reported in the March 24 issue of the journal Science .

“We wanted to look at how the availability of oxygen changed the types of chemical reactions,” Raymond said, “both with respect to metabolites (metabolism byproducts) and to the enzymes needed to carry out metabolism.”

Raymond and Segrè calculated the number of possible combinations of the thousands of enzymes and chemicals involved in all known metabolic reactions across the tree of life, and came up with a “virtually limitless” number – ten to the 16,536th power. Simulating that many networks would be an impossible task even for LLNL, which houses the world’s most powerful supercomputers.

To make the project manageable, the researchers used a statistical technique called Monte Carlo to randomly sample and simulate about 100,000 networks. “We found that all the different types of networks fell into four different clusters of increasing size and connectivity, and in networks within the largest clusters, molecular oxygen was always present,” Raymond said.

The smaller, simpler networks encompass anoxic, or oxygen-free, pathways common to all life, from single-celled bacteria to the largest mammals. “All this information can be gathered by analyzing the many genomes already sequenced and publicly available,” Segrè said.

“Certain processes were essential to the development of the earliest cellular life,” added Raymond, “and the most basic, intrinsic reactions organisms need to survive persist today. For example, how we break down glucose (sugar) has been remarkably well conserved for billions of years.”

For higher life forms to evolve, however, additional processes were needed, such as the ability to synthesize, or break down, steroids and alkaloids – and those require oxygen. But until about two billion years ago, Earth’s atmosphere was mostly carbon dioxide, sulfur dioxide and nitrogen; only about one-tenth of 1 percent was oxygen. The first microorganisms derived their sustenance from amino acids, hydrogen sulfide, organic carbon and similar hard-to-get substances. Not only was oxygen unnecessary, it was toxic to early organic life.

But about 2.2 billion years ago, a remarkable transformation took place.  Cyanobacteria, also known as blue-green algae, learned how to do oxygenic photosynthesis – using sunlight, carbon dioxide and water to produce sugar and other carbohydrates, and giving off oxygen as a byproduct. Thanks to the abundance of all three substances, the cyanobacteria thrived, and the oxygen they produced began to fill the ocean and the atmosphere. Today, due to the photosynthetic action of both bacteria and plants, oxygen makes up about 20 percent of the Earth’s atmosphere.

“Things starkly changed when cyanobacteria evolved,” Raymond said. “The atmosphere became deadly to all the microorganisms that were around at the time. It would have been cataclysmic for life – the existing bacteria either had to retreat (into the deep ocean) or adapt to use oxygen.”

Fortunately for us, many organisms did adapt, either on their own or through horizontal gene transfer – when one species, in effect, “steals” a gene and its molecular function from another. An important example of this was the ability of early life to derive energy from oxygen by “capturing” oxygen-using bacteria inside their cells, which ultimately became mitochondria (the cell’s energy-generating “power plants”). That adaptation may have marked the beginning of complex life on Earth. What’s more, recent research suggests that a sharp rise in atmospheric oxygen about 50 million years ago was the evolutionary boost that enabled mammals to grow in size and ultimately dominate the planet.

“Oxygen is the high-energy reactant that we need to grow into big, complex, multi-cellular organisms,” Raymond said, “so life as we know it was kick-started a few billion years ago by the oxygen-producing microbes.”

The new findings also may imply that oxygen would be a good proxy for the search for intelligent life elsewhere in the universe. “If you can detect oxygen or ozone in the atmosphere,” Raymond said, “that would be a great marker, along with water, for finding a habitable planet.”

Raymond and Segrè’s findings suggest that additional evolutionary secrets might be uncovered through the study of metabolic networks.

“We will go back and look at the evolutionary history of the development of enzymes and metabolites to see how the process evolved over time,” Raymond said. “There’s lots more information available to be mined, not just with respect to oxygen but also other contingencies in the evolution of metabolism – for example, how the metabolic networks have changed over time in response to things like vitamins.”

“Looking at networks that integrate information from many different organisms,” added Segrè, “also may prove to be crucial for understanding the dynamics and evolution of complex ecosystems, such as the microbial communities revealed by metagenomic sequencing.”

Raymond holds a Ph.D. in chemistry from Arizona State University. He joined LLNL in the summer of 2004 as a Lawrence Fellow, and his Lawrence fellowship helped support the research. Segrè is an assistant professor of Bioinformatics in the Biology and Biomedical Engineering Departments at Boston University and a Faculty Scholar at LLNL.