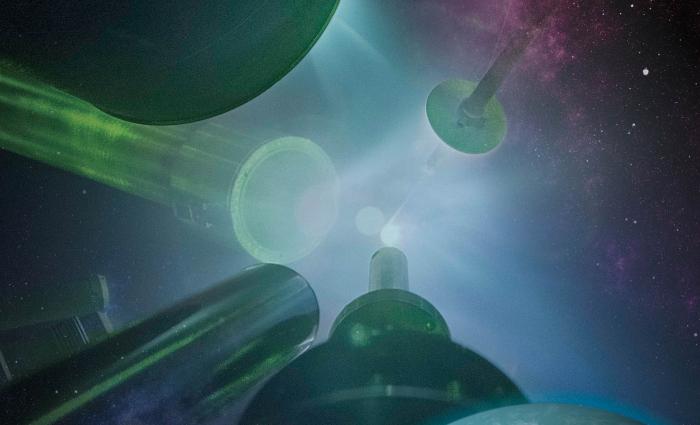 New laser-driven compression experiments reproduce the conditions deep inside exotic super-Earths and giant planet cores, and the conditions during the violent birth of Earth-like planets, documenting the material properties that determined planet formation and evolution processes.

The experiments, reported in the Jan. 23 edition of Science, reveal the unusual properties of silica — the key constituent of rock — under the extreme pressures and temperatures relevant to planetary formation and interior evolution.

Using laser-driven shock compression and ultrafast diagnostics, Lawrence Livermore National Laboratory (LLNL) physicist Marius Millot and colleagues from Bayreuth University (Germany), LLNL and the University of California, Berkeley were able to measure the melting temperature of silica at 500 GPa (5 million atmospheres), a pressure comparable to the core-mantle boundary pressure for a super-Earth planet (5 Earth masses), Uranus and Neptune. It also is the regime of giant impacts that characterize the final stages of planet formation.

"Deep inside planets, extreme density, pressure and temperature strongly modify the properties of the constituent materials," Millot said. "How much heat solids can sustain before melting under pressure is key to determining a planet’s internal structure and evolution, and now we can measure it directly in the laboratory."

In combination with prior melting measurements on other oxides and on iron, the new data indicate that mantle silicates and core metal have comparable melting temperatures above 300-500 GPa, suggesting that large rocky planets may commonly have long-lived oceans of magma – molten rock – at depth. Planetary magnetic fields can be formed in this liquid-rock layer.

"In addition, our research suggests that silica is likely solid inside Neptune, Uranus, Saturn and Jupiter cores, which sets new constraints on future improved models for the structure and evolution of these planets," Millot said.

Those advances were made possible by a breakthrough in high-pressure crystal growth techniques at Bayreuth University in Germany. There, Natalia Dubrovinskaia and colleagues managed to synthesize millimeter-sized transparent polycrystals and single crystals of stishovite, a high-density form of silica (SiO2) usually found only in minute amounts near meteor-impact craters.

Those crystals allowed Millot and colleagues to conduct the first laser-driven shock compression study of stishovite using ultrafast optical pyrometry and velocimetry at the Omega Laser Facility at the University of Rochester’s Laboratory for Laser Energetics.

"Stishovite, being much denser than quartz or fused-silica, stays cooler under shock compression, and that allowed us to measure the melting temperature at a much higher pressure," Millot said. "Dynamic compression of planetary-relevant materials is a very exciting field right now. Deep inside planets hydrogen is a metallic fluid, helium rains, fluid silica is a metal and water may be superionic."

In fact, the recent discovery of more than 1,000 exoplanets orbiting other stars in our galaxy reveals the broad diversity of planetary systems, planet sizes and properties. It also sets a quest for habitable worlds hosting extraterrestrial life and shines new light on our own solar system. Using the ability to reproduce in the laboratory the extreme conditions deep inside giant planets, as well as during planet formation, Millot and colleagues plan to study the exotic behavior of the main planetary constituents using dynamic compression to contribute to a better understanding of the formation of the Earth and the origin of life.