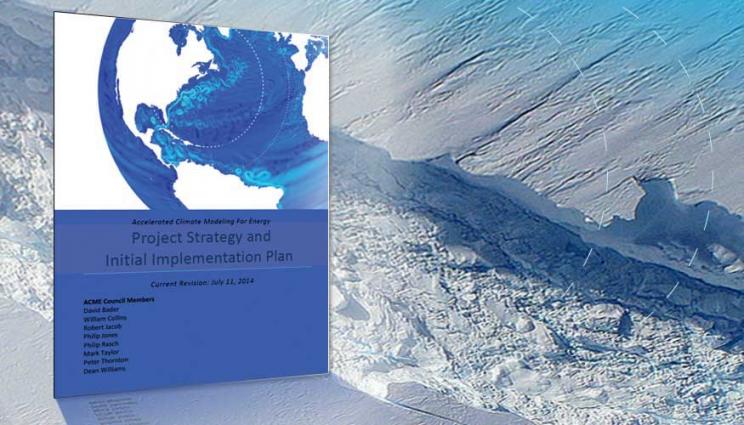 A massive crack runs about 29 kilometers (18 miles) across the Pine Island Glacier's floating tongue, marking the moment of creation for a new iceberg that will span about 880 square kilometers (340 square miles) once it breaks loose from the glacier. The onset of the collapse of the Antarctic Ice Sheet is one area a new project headed by Lawrence Livermore will examine.

New project is the ACME of addressing climate change

High performance computing (HPC) will be used to develop and apply the most complete climate and Earth system model to address the most challenging and demanding climate change issues.

Eight national laboratories, including Lawrence Livermore, are combining forces with the National Center for Atmospheric Research, four academic institutions and one private-sector company in the new effort. Other participating national laboratories include Argonne,Brookhaven,Lawrence Berkeley,Los Alamos,Oak Ridge,Pacific Northwest and Sandia.

The project, called Accelerated Climate Modeling for Energy, or ACME,is designed to accelerate the development and application of fully coupled, state-of-the-science Earth system models for scientific and energy applications. The plan is to exploit advanced software and new high performance computing machines as they become available.

The initial focus will be on three climate change science drivers and corresponding questions to be answered during the project's initial phase:

Over a planned 10-year span, the project aim is to conduct simulations and modeling on the most sophisticated HPC machines as they become available, i.e., 100-plus petaflop machines and eventually exascale supercomputers. The team initially will use U.S. Department of Energy (DOE)Office of Science Leadership Computing Facilities at Oak Ridge and Argonne national laboratories.

"The grand challenge simulations are not yet possible with current model and computing capabilities," said David Bader, LLNL atmospheric scientist and chair of the ACME council."But we developed a set of achievable experiments that make major advances toward answering the grand challenge questions using a modeling system, which we can construct to run on leading computing architectures over the next three years."

To address the water cycle, the project plan (link below) hypothesized that: 1) changes in river flow over the last 40 years have been dominated primarily by land management, water management and climate change associated with aerosol forcing; 2) during the next 40 years, greenhouse gas (GHG) emissions in a business as usual scenario may drive changes to river flow.

"A goal of ACME is to simulate the changes in the hydrological cycle, with a specific focus on precipitation and surface water in orographically complex regions such as the western United States and the headwaters of the Amazon," the report states.

To address biogeochemistry, ACME researchers will examine how more complete treatments of nutrient cycles affect carbon-climate system feedbacks, with a focus on tropical systems, and investigate the influence of alternative model structures for below-ground reaction networks on global-scale biogeochemistry-climate feedbacks.

For cryosphere, the team will examine the near-term risks of initiating the dynamic instability and onset of the collapse of the Antarctic Ice Sheet due to rapid melting by warming waters adjacent to the ice sheet grounding lines.

The experiment would be the first fully-coupled global simulation to include dynamic ice shelf-ocean interactions for addressing the potential instability associated with grounding line dynamics in marine ice sheets around Antarctica.

Initial funding for the effort has been provided by DOE's Office of Science.