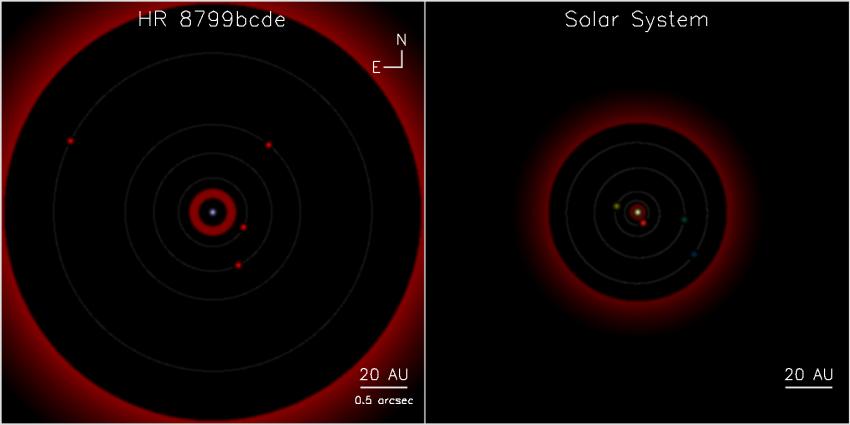 Schematic representation of the HR8799 system compared to our own solar system, showing the four HR8799 planets and Jupiter, Saturn, Uranus and Neptune in our solar system. Infrared observations made by space telescopes have shown that the HR8799 system has a massive, dusty asteroid belt, thousands of times more dense than our own, that is gravitationally shaped by HR8799e the same way Jupiter shapes our asteroid belt, and an outer belt of cometary debris similar to, but much more massive, than our own Kuiper belt. Credit: NRC-HIA, Christian Marois, and the W.M. Keck Observatory 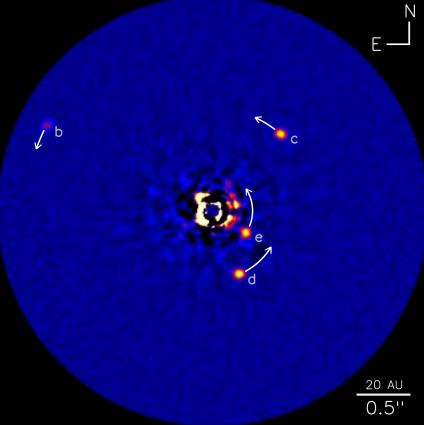 Infrared image of the HR8799 planetary system. This image shows planet HR8799b (five times the mass of Jupiter), planets HR8799c and HR8799d (seven times the mass of Jupiter) and the new planet HR8799e. The arrows show the predicted motion of the planets over the next 10 years. The scale bar at the bottom left shows 20 astronomical units (AU), about equal to the radius of the orbit of Uranus. Credit: NRC-HIA, Christian Marois, and the W.M. Keck Observatory 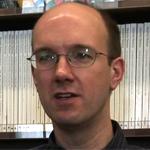 Bruce Macintosh, a senior scientist at LLNL and the principal investigator for the Keck Observatory program. 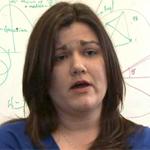 Quinn Konopacky, a postdoctoral researcher at LLNL's Institute of Geophysics and Planetary Physics and a key author of the paper.

Astronomers have discovered a fourth giant planet, joining three others that, in 2008, were the subject of the first-ever pictures of a planetary system orbiting another star other than our sun.

The solar system, discovered by a team from Lawrence Livermore National Laboratory and the National Research Council of Canada (NRC) Herzberg Institute of Astrophysics with collaborators at University of California, Los Angeles and Lowell Observatory, orbits around a dusty young star named HR8799, which is 129 light years away. All four planets are roughly five to seven times the mass of Jupiter.

Now, the same research team has discovered a fourth planet that is about seven times the mass of Jupiter. Using high-contrast, near infrared adaptive optics on the Keck II telescope in Hawaii, the astronomers imaged the fourth planet (dubbed HR8799e) in 2009 and confirmed its existence and orbit in 2010. The research appears in the Dec. 8 edition of the journal Nature .

"The images of this new inner planet in the system is the culmination of 10 years worth of innovation, making steady progress to optimize every observation and analysis step to allow the detection of planets located ever closer to their stars," said Christian Marois, a former LLNL postdoc now at NRC, and first author of the new paper.

If this newly discovered planet was located in orbit around our sun, it would lie between Saturn and Uranus. At about 30 million years old, this giant version of our solar system is young compared to our system, which is about 4.6 billion years old.

Though the system is very much like our own, it is much more extreme than our own -- the combined mass of the four giant planets may be 20 times higher, and the asteroid and comet belts are dense and turbulent. In fact, the massive planets' pull on each other gravitationally, and the system may be on the verge of falling apart.

Lawrence Livermore scientists simulated millions of years of evolution of the system, and showed that to have survived this long, the three inner planets may have to orbit like clockwork, with the new planet going around the star exactly four times while the second planet finishes two orbits in the time it takes the outer planet to complete one. This behavior was first seen in the moons of Jupiter but has never before been seen on this scale.

Studying the planet's orbits also will help estimate their masses. "Our simulations show that if the objects were not planets, but supermassive "brown dwarfs," the system would have fallen apart already," said Quinn Konopacky, a postdoctoral researcher at LLNL's Institute of Geophysics and Planetary Physics and a key author of the paper. (Brown dwarfs are failed stars, too low in mass to sustain stable hydrogen fusion but larger than planets.)

"The implication is that we have truly found a unique new system of planets. We don't yet know if the system will last for billions of years, or fall apart in a few million more. As astronomers carefully follow the HR8799 planets during the coming decades, the question of just how stable their orbits are could become much clearer." (See the simulation showing thousands of years of evolution of the system if the planets are not in a clockwork orbit or are more massive brown dwarfs.)

The origin of these four giant planets remains a puzzle. It neither follows the "core accretion" model, in which planets form gradually close to stars where the dust and gas are thick or the "disk fragmentation" model in which a turbulent planet-forming disk rapidly cools and collapses out at its edges.  Bruce Macintosh, a senior scientist at LLNL and the principal investigator for the Keck Observatory program, said: "There's no simple model that can make all four planets at their current location. It's a challenge for our theoretical colleagues."

Previous observations had shown evidence for a dusty asteroid belt orbiting closer to the star -- the new planet's gravity helps account for the location of those asteroids, confining their orbits just like Jupiter does in our solar system. "Besides having four giant planets, both systems also contain two so-called "debris belts" composed of small rocky and/or icy objects along with lots of tiny dust particles, similar to the asteroid and Kuiper comet belts of our solar system," noted co-author Ben Zuckerman, a professor of physics and astronomy at UCLA. ( See the movie .)

"Images like these bring the exoplanet field into the era of characterization," said Travis Barman, a Lowell Observatory exoplanet theorist and co-author of the current paper. "Astronomers can directly examine the atmospheric properties of four giant planets orbiting another star that are all the same young age and that formed from the same building materials."

"I think there's a very high probability that there are more planets in the system that we can't detect yet," Macintosh said. "One of the things that distinguishes this system from most of the extrasolar planets that are already known is that HR8799 has its giant planets in the outer parts -- like our solar system does -- and so has 'room' for smaller terrestrial planets -- far beyond our current ability to see -- in the inner parts."

A team led by Macintosh is constructing the Gemini Planet Imager , a new system that will be up to 100 times more sensitive than current instruments and able to image planets similar to our own Jupiter around nearby stars.

"It's amazing how far we've come in a few years," Macintosh said. "In 2007, when we first saw the system, we could barely see two planets out past the equivalent of Pluto's orbit. Now we're imaging a fourth planet almost where Saturn is on our solar system. It's another step to the ultimate goal -- still more than a decade away -- of a picture showing another planet like Earth." 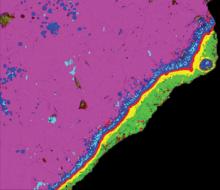 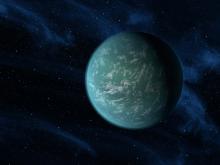 Putting the squeeze on planets outside our solar system 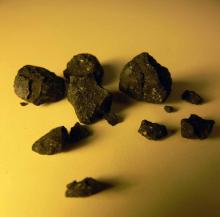 Meteorite made up of rare early solar system material