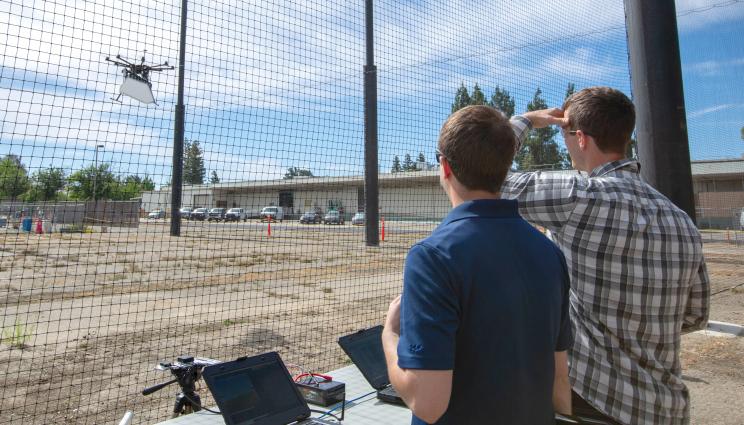 Lawrence Livermore engineers Brian Wihl and Jacob Trueblood use their laptop computers to pilot drones under the netting of the OS-150 Robotics Laboratory for a Department of Defense project. Photos by Julie Russell/LLNL

New open-air facility will be testing ground for autonomous drones, vehicles and robots

The multicopter drone’s blades whirred, lifting it off the ground with a distinct hum, kicking up dust and propelling the craft through its preprogrammed flight path. The drone’s operators gazed at their laptop screens, closely monitoring the performance of the drone’s sensors while it carried out its maneuvers.

Carrying a payload for the Department of Defense, the drone was among the first machines tested under the netting of Lawrence Livermore National Laboratory’s (LLNL) new OS-150 Robotics Laboratory, an outdoor, 8,000 square-foot enclosure that will serve as a proving ground for the autonomous drones, vehicles and robots of the future.

Informally known as the "drone pen," the 50-foot-tall rectangular enclosure, located directly across from one of the Lab’s main engineering buildings, is allowing operators to pilot their drones safely and autonomously using GPS coordinates, saving the researchers time, money and effort by bypassing certain Federal Aviation Administration (FAA) regulations and permits required for piloting drones in open air, easing their prep work and reducing the amount of observers that need to be on-site for a test. 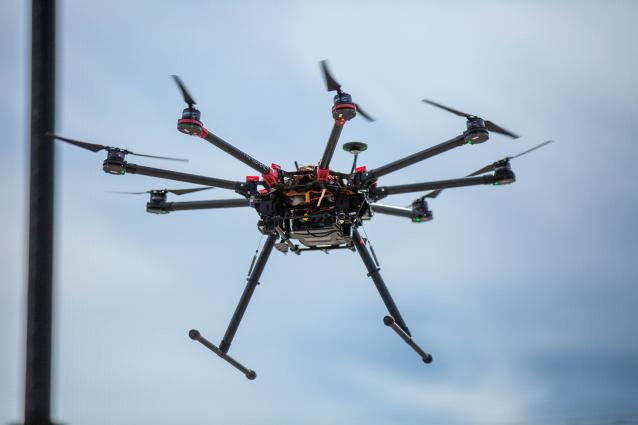 After years of planning, the enclosure opened in June, beginning with drone test flights in collision avoidance and sensor integration by researchers in the Lab’s collaborative autonomy group. The group, headed by LLNL engineer Reg Beer, aims to equip drones and other vehicles with advanced artificial intelligence, enabling the vehicles to intelligently network or "swarm" to complete tasks deemed too hazardous for humans to do, such as sweeping for hidden improvised explosive devices (IEDs) located underground. The ultimate goal, Beer said, is to use the facility to test multiple networked drones, all flying autonomously and communicating with each other, in a safe and secure environment.

"By having a pen, you don’t put FAA requirements on the individual principal investigators of the projects," Beer said. "This pen allows us to be on the other side of this net and let the drones fly autonomously. That not only saves us labor and cost while we develop these systems, it also allows us to put more and more intelligence on the drone. Ultimately, drones will fly autonomously, not semi-autonomously or remote-piloted, and we’ll be able to help usher that in by developing these capabilities."

In the past, Beer explained, researchers would have to book time at Site 300 or somewhere else off-site where drone flights are legal, wait several weeks or more, and possibly incur travel costs and delays in the process, thus slowing technological development. The enclosure isn’t just for drones either, Beer stressed. With room to expand, the OS-150 has the potential for testing an assortment of ground-based robotics and manned or unmanned vehicles that would work with aerial drones to search for buried objects or perform other collaborative tasks. Another possible upgrade, Beer said, is installing a water tank to test submersible drones and model underwater sensing applications.

LLNL electrical engineer Brian Wihl is among the first drone pilots to make use of the enclosure. Wihl began flying remote control helicopters in his youth before moving on to multirotor machines while attending college at Cal Poly-San Luis Obispo. He now works on drones at the Lab, specializing in embedded systems. He said piloting a drone inside the netted enclosure adds safety and eliminates the possibility of dreaded "flyaways" while still providing access to everything a pilot would normally have out in the open air, such as GPS, essential for guiding the drones on their flight paths.

"I think it’s amazing," Wihl said. "To have this [pen] essentially next to our building, we can just come out here and fly. We don’t have to make sure we meet all the requirements that add a lot of overhead. It basically allows us to be a lot more efficient in our testing, achieve quicker turnaround times and, as we move forward and really figure out our operations, it’s really going to benefit our projects and make sure we get the data and testing we need a lot faster."

Since the OS-150 opened in mid-June, Wihl said the group already has received numerous requests from scientists across the Lab who are interested in integrating the sensors they’re working on with drones. One project, Wihl said, was using large aircraft to deploy their sensors, requiring scheduling of tests weeks or months in advance.

"Within a few weeks and a minimal amount of time, we got their sensor flying on a drone and they were able to take meaningful data; now they’re looking at that for the future," Wihl said. "It’s one of those things where people see the capability and they say, ‘Wow I want that for my project.’"

As drone technology and autonomous vehicles continue to grow as Lab research areas of interest, Beer expects heavy usage of the enclosure in the coming years. He plans to develop a web-based system to manage and prioritize requests for access, with a hierarchy of users from programmatic to institutional needs, and staff development.

"This was an internal investment by this Laboratory in capability because they realized that this would benefit the programs here," Beer said. "Having this pen on-site gives Livermore researchers a competitive advantage in that it’s convenient, it’s available for them as they develop, integrate and improve their hardware, and is a resource they can frequently use."

Eventually, Beer said users could potentially bring their own drones into the facility, provided they have a programmatic purpose, and learn to pilot them and develop their skills. Pilots also could conduct testing for commercial partners that have collaborations with the Lab. Beer also would like to have summer students visit the Lab to engage in flight competitions and races, which could position the OS-150 as a recruiting tool for the drone pilots of tomorrow.