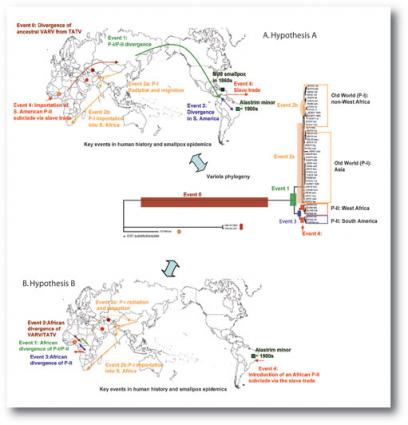 Two hypotheses of evolution of the smallpox-causing virus are compared in the research paper; variola (VARV) is believed to have diverged from a virus carried by rodents. One of the most similar sequences is found in the Taterapox virus (TATV) that infects the West African naked-soled gerbil. The maps show human migration patterns and the emergence of different strains of smallpox variola. To the right are clusters of the various strains, arranged according to patterns of single-point mutations in the viral DNA. Click

for a high-resolution PDF.

LIVERMORE, Calif. –Smallpox is older than thought, according to results of a new technique reported in the Sept. 24 issue of the Proceedings of the National Academy of Sciences by researchers from Lawrence Livermore National Laboratory and the Centers for Disease Control (CDC).

The researchers created a molecular clock by looking at the rate of random mutations in the smallpox-causing virus collected in 47 locations around the world, from 1946 – 1977. The variation between the strains was compared to sequences from the most similar animal poxes.

The results indicated that a mild and more severe strain diverged either 16,000 or 68,000 years before present, depending on whether accounts from East Asia or Africa are used to calibrate the molecular clock. In either case, this divergence stretches further back in time than previously believed.

The authors compare hypotheses about where and when strains of the virus evolved. No one hypotheses is ruled out, but an ancient origin seems most plausible since the slowly evolving virus now exclusively infects humans, implying that any intermediate link to an animal host has long since died out.

Collaboration between LLNL’s Pathogen Bioinformatics group and the CDC’s Sequencing and Poxvirus groups took place under a Memorandum of Understanding between the Laboratory and the CDC initiated in early 2003.

The initial research focused on determining viral signatures by looking at unique genetic characteristics. The CDC had recently sequenced the genomes of the various smallpox strains, based on the repository it holds for the World Health Organization (the world’s only other declared smallpox storehouse is in Russia).

The disease was considered eradicated in 1980, three years after the last naturally occurring case in 1977. Vaccinations had been stopped in 1972, following an intensive worldwide effort to wipe out the virus. Smallpox, in its most severe form, was deadly in up to 30 percent of cases.

The researchers said the correlation of historical record and a molecular clock provides a framework that could be applied to studying the natural history of other diseases. Although no particular hypotheses of its evolution is supported or disproved, said corresponding author Inger Damon, M.D., Ph.D., acting chief of the CDC’s Poxvirus and Rabies Branch. "It shows the delineation of tantalizing potential connections between different isolates."

Analysis of isolates from geographically dispersed areas indicated that local pools of old, and perhaps ancient, strains existed. The human disease may have originated from a rodent-borne virus in Africa. The evolutionary analysis suggests that smallpox disease slowly spread westward from East Asia, which would agree with the oldest smallpox-like descriptions from ancient China as far back as 1122 BC. It is unclear when it first reached the New World – some evidence suggests an ancestral virus arrived with early humans and diversified into a mild version there.

The slow spread out of Asia could explain why smallpox descriptions are missing from ancient Greece or Rome as well as the Old and New Testaments.

As cells multiply and divide, occasional errors creep in to new copies of the genetic instructions. Some errors are more critical than others. The variation allows some individuals among the offspring to be better-adapted to changing conditions, providing an evolutionary advantage that is passed down to their progeny. Over time, some lines flourish and others die out.

For a reliable molecular clock, it would be nice to see the steady rate of mutation in a general sense without a marked effect of change, pro or con, in any particular gene or subset. So the researchers created a simplified approach for looking across the nearly 200,000 DNA base pairs of the virus genome. They concentrated the mutations for comparing sequences by excerpting stretches in which a single change at one point was flanked by seven unchanged bases at each side.

"We assumed there was a molecular clock ticking," Gardner said. "The question was what was the rate?"
The Laboratory’s intensive computing capabilities complemented the CDC contribution of calibrating the information with historical accounts, Li said.

"It was a valuable opportunity to be able to compare the genomes," added Lab scientist Beth Vitalis, who helped analyze the data. She added that additional, related studies of virulence factors are in process.

On the origin of smallpox: Correlating variola phylogenics with historical smal…
Exploring the Potential of Varioloa Virus Infection of Cynomolgus Macaques as M…
Life at the Nanoscale
Centers for Disease Control and Prevention