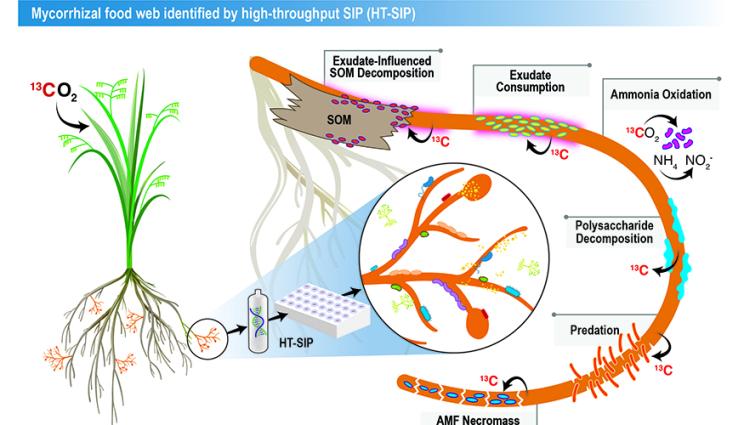 Linking the identity of wild microbes with their physiological traits and environmental functions is a key aim for environmental microbiologists. Of the techniques that strive for this goal, Stable Isotope Probing — SIP — is considered the most effective for studying active microorganisms in natural settings.

Lawrence Livermore National Laboratory (LLNL) scientists have developed a new technique — high-throughput SIP — that automates several steps in the process of stable isotope probing, allowing investigations of microbial activity of microorganisms under realistic conditions, without the need for lab culturing.

In SIP, active microbes are identified via incorporation of stable isotopes into their biomass. It is among the most powerful methods in microbial ecology since it can identify active microbes and their physiological traits (substrate use, cellular biochemistry, metabolism, growth, mortality) in complex communities under native conditions.

Typically, the SIP method requires substantial hands-on labor and only allows for a small number of samples. But the new LLNL technique requires one-sixth the amount of hands-on labor compared to the manual SIP and allows 16 samples to be processed simultaneously.

“Our semi-automated approach decreases operator time and improves reproducibility by targeting the most labor-intensive steps of SIP,” said LLNL scientist Erin Nuccio, and lead author of a paper appearing in the journal Microbiome. “We have now used this approach to process over a thousand samples, including some from very understudied soil microhabitats.”

One such microhabitat is the soil immediately surrounding the tissues of mycorrhizae — a type of fungi that forms symbiotic relationships with 72% of all land plants. In exchange for plant carbon, the fungus (arbuscular mycorrhizal fungi) supplies its hosts with essential resources such as nitrogen, phosphorus and water. Nuccio studies the interactions between these ubiquitous fungi and the soil microbiome for her Department of Energy (DOE) funded early career research.

In this proof-of concept study, the authors showed the “food web” of interactions stimulated by mycorrhizal fungi in soil.

“We think this is a major route for how plant carbon gets broadly distributed into soil. Soil holds the largest pool of actively cycling organic carbon on the planet,” said co-corresponding author Jennifer Pett-Ridge, who is the LLNL project lead and head of the Department of Energy’s Office of Science “Microbes Persist” Soil Microbiome Scientific Focus Area. “We sequenced a tiny amount of DNA, determined the active organisms and then reconstructed their genomes and potential interactions.”