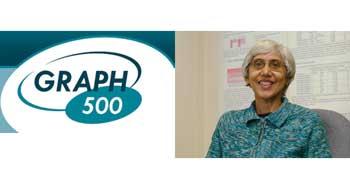 The Blue Gene/Q Prototype II, now located at the IBM's T.J. Watson Research Center in New York and soon to be delivered to LLNL as the new Sequoia supercomputer for the Advanced Simulation and Computing (ASC) Program, won first place on the annual Graph 500 list.

The win, announced to a packed room at the SC11 conference in Seattle, corroborates the new machine's data-intensive computing abilities. See the full list.

Petrini said of the BlueGene/Q prototype that "we've made tremendous progress," and that the new system is a "convergence of algorithmic and architectural innovation."

LLNL had multiple entires on this year's Graph500 list, including several entries submitted by Maya Gokhale and Roger Pearce that used SSD Storage arrays to hold the graphs. The system Leviathan, with a single 40-core node, 1TB of memory, and 12TB of Flash storage, was able to process a graph of 1 trillion edges, larger than the LLNL top ranked entry.

Graph 500 has been published for three years, growing from nine entries the first year to 50 entries this year. The list ranks the world's most powerful computer systems for data-intensive computing. Graph 500 gets its name from graph-type problems -- algorithms -- that are a core part of many analytics workloads in applications, such as those for cyber security, medical informatics, and data enrichment.