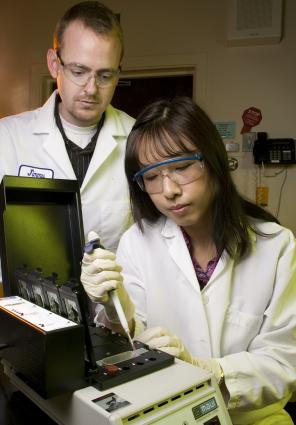 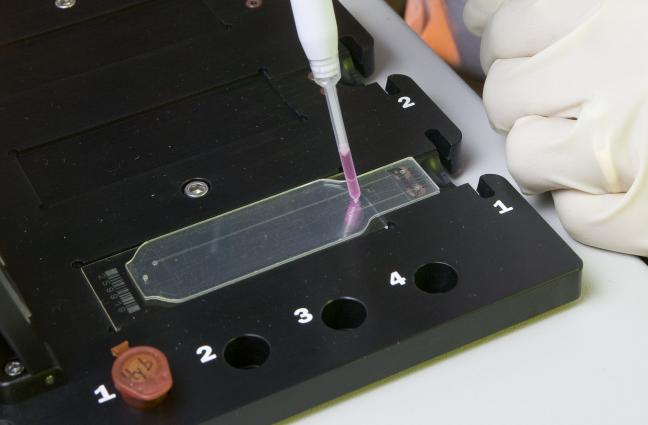 Shown is the one-inch wide by three-inch long Lawrence Livermore Microbial Detection Array that contains 388,000 probes that are used to detect viruses and bacteria. Photos by Jacqueline McBride/LLNL

The advance, known as the Lawrence Livermore Microbial Detection Array (LLMDA), could enable law enforcement, medical professionals and others to detect within 24 hours any virus or bacteria that has been sequenced and included among the array’s probes.

Developed between October 2007 and February 2008, the LLMDA detects viruses and bacteria with the use of 388,000 probes that fit in a checkerboard pattern in the middle of a one-inch wide, three-inch long glass slide.

The current operational version of the LLMDA contains probes that can detect more than 2,000 viruses and about 900 bacteria.

"The ability to detect the major bacterial and viral components of any sample can be used in countless different ways," said Tom Slezak, LLNL’s associate program leader for Informatics. "This is important because it fills a cost-performance gap that is relevant to many missions: biodefense, public health and product safety."

In the area of biodefense, current systems are centered upon the detection of smaller prioritized sets of high-risk pathogens, rather than testing for a much broader spectrum of organisms.

"The LLMDA allows us to not only identify the biological pathogens on a priority screening list, but also any other already-sequenced bacteria or virus in a sample that you might not have been expecting to find, including possible novel or emerging pathogens," Slezak said.

Current plans call for the detection array to be evaluated for operational bioforensic use at the Frederick, Md.-based National Biodefense Analysis and Countermeasures Center of the U.S. Department of Homeland Security.

As the cost of the array is reduced, the LLMDA technology could be used to improve public health diagnostics, Slezak said, adding that dozens of bacteria and viruses can be detected in a single test from the entire spectrum of sequenced organisms.

One advantage of the Livermore array is that it provides researchers with the capability of detecting pathogens over the entire range of known viruses and bacteria.  Current multiplex polymerase chain reaction (PCR) techniques can at most offer detection from among 50 organisms in one test.

In April, in a Journal of Virology article, Livermore researchers working with a scientist from the San Francisco-based Blood Systems Research Institute said they used the LLMDA technology to confirm the presence of an apparently benign pig virus in a vaccine.

The pig virus, porcine circovirus-1 (PCV-1), was unexpectedly found in GlaxoSmithKline’s Rotarix vaccine, which is used to prevent diarrhea in babies.

"One result of this research is that it demonstrates how modern technologies could change and drastically improve product safety," Slezak said.

While product safety rules require demonstrating that a list of known contaminants is not present, Slezak said the use of modern advances in DNA sequencing and arrays would allow manufacturers to identify the potential presence of contaminating biological material present in quantities large enough to be of potential concern.

"For each bacteria or virus that has been sequenced anywhere in the world, we have several dozen squares on the checkerboard that will identify sequences from that organism," Slezak explained.

Currently, Slezak’s team is testing a next-generation LLMDA that boasts 2.1 million probes. This version contains probes representing about 178,000 viral sequences from some 5,700 viruses, and about 785,000 bacterial sequences from thousands of bacteria.

As a screening tool, Slezak sees the LLMDA as occupying niche roles between PCR machines and sequencing.

The LLMDA process starts with the purification of DNA or RNA from a sample, such as sputum or blood. The sample is next labeled with a fluorescent dye and hybridized on the microarray at 42 degrees C or about 107.6 degrees Fahrenheit. In turn, a fluorescent scanner and analysis software are used to detect the probes that have lit up, identifying the presence of viral or bacterial sequences.

The Livermore team plans to update probes on the array with new sequences of bacteria, viruses and other microorganisms from GenBank and other public databases about once per year, in addition to using sequences obtained from collaborators for their probes.

A computer scientist and the team’s leader, Slezak came up with the idea for the LLMDA in 2003. His team includes biologist Crystal Jaing, who leads the microarray lab work and manages the collaborations; bioinformaticist Shea Gardner, who designed the array; biostatistician Kevin McLoughlin, who designed the analysis software; and James B. Thissen, who performs the microarray experiments.